100 Years of the Jayhawk 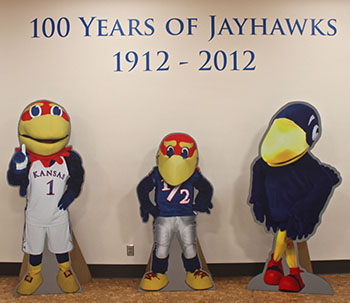 One hundred years ago a KU student named Daniel Henry "Hank" Maloy drew what became the first "signature" Jayhawk.  The term Jayhawker has been associated with Kansas since the pre-Civil War era and eventually became the symbol for the University of Kansas.  In 1886, the term Jayhawk was incorporated into our world-famous college yell "Rock Chalk Jayhawk KU," although it was not yet portrayed as a bird.  In a pre-Maloy drawing in the 1908 Jayhawker yearbook, a rather prehistoric looking bird is perched on a goalpost heckled a miserable looking Missouri Tiger.

In recollections of his college years, Maloy remembers that he first had the idea of drawing the Jayhawk as a bird in October of 1912 when he saw a stuffed chickenhawk in the Squires photography studio downtown.  He went home and drew a long-legged Jayhawk with big, heavy shoes so that he “could administer more effective justice” towards athletic opponents.

Not surprisingly, most of the items in this exhibit are from the holdings of the University Archives, but we’ve also discovered that the Kansas Collection, and even Special Collections (through writings of H. L. Mencken, no less) have also contributed to 100 Years of Jayhawk!

Many thanks go to Letha Johnson, Sherry Williams, Whitney Baker, and Roberta Woodrick for their assistance in making this exhibition possible.

This is an online version of a physical exhibit that was on display in Kenneth Spencer Research Library from December 2012 through March of 2013. The exhibit was created by Rebecca Schulte, University Archivist. 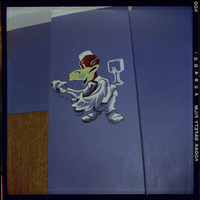 Patrick Bower's, mural of KU Jayhawk portraying the School of Pharmacy, formerly located in the Jayhawk Reading Room of Watson Library, circa 1954

Patrick Bower's, mural of KU Jayhawk portraying the School of Pharmacy, formerly located in the Jayhawk Reading Room of Watson Library, circa 1954.… 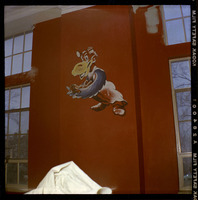 Patrick Bower's mural of a Jayhawk portraying the School of Medicine, formerly located in the Jayhwkw Reading Room of Watson Library, circa 1954

Patrick Bower's mural of a Jayhawk portraying the School of Medicine, formerly located in the Jayhwkw Reading Room of Watson Library, circa 1954.…

This strange Jayhawk on a crest is labeled for the Library Building and was drawn by Ray L. Gamble, the State Architect, in 1922. 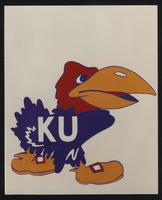 Dr. Eugene "Yogi" Williams updated the 1929 fighting Jayhawk in 1941 with a more refined, broader beak, fluffed out feathers, and buckles on his… 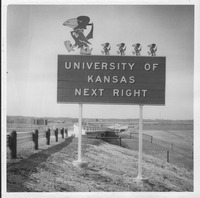 Road sign on the Kansas Turnpike: "University of Kansas next right" with a big Jayhawk followed by four baby Jayhawks, 1947/48 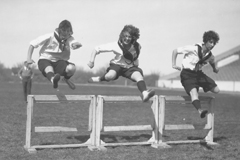 University Archives, established in 1969, is the repository for the records documenting the history of the University of Kansas. While some early records were lost, numerous documents were identified and kept by various offices and eventually brought to the Archives for proper preservation and storage.