This selection of prints by Mary Huntoon had adhesives and attachments that either obscured the image, or greatly impacted the object’s longterm stability. Incorrect use of tapes, glues, mat board, and other attachments used to display works of art on paper can cause staining and accelerate the overall aging process. Three of these prints, Rural School in Moonlight, Near Meriden, KS — A Hillside Farm, and Sky Line, Topeka, KS, were stained from rubber-based adhesives used to previously attach the prints to older mounts. Solvents were tested to determine the best mixture that would safely remove the adhesive without negatively impacting the media or the paper support. The solvents were applied to the adhesive areas with a brush while the work of art was positioned over a vacuum suction table that helped to pull out the adhesive.

The fourth print, 10th Street Kansas City, had been folded and taped with masking tape to fit into a frame too small for the original paper dimensions. Long-term display in high levels of light caused the paper support to discolor over time. The tape carrier and adhesive were removed with solvents and then the print was washed in a shallow bath using pH-adjusted solvents to reduce both the tape stains and overall discoloration from light exposure. 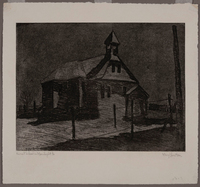 Structural issues such as tears or losses in the paper support can leave the work vulnerable to further damage and prevent safe handling and display. Several large edge tears in The Three Women were mended using Korean paper, or hanji, and attached with wheat starch paste made in the conservation lab. Zapolote sustained significant pest damage and the entire upper right corner of the sheet was lost as well as a few other smaller areas across the top edge. This treatment used wet pulp to rebuild the corner to match the color and thickness of the paper.

In Corsican Café and In the Muttl Pension, a rigid polysaccharide gel called agarose was saturated with solvents and used to remove the tape adhesives. Agarose is obtained from the cell walls of some species of red algae or seaweed. When prepared, it can form a rigid, clear sheet that can be cut and shaped to fit over the desired area. In this application, the gel acted like a sponge to pull the adhesive out of the paper support.

Momus had been mounted to an acidic board that was starting to curl. Acidic mounts can also cause overall staining, accelerate the aging process, and are at risk of breaking during handling. The board was removed by wetting it with purified water and removing it layer by layer.

Learn more about how this print was conserved: https://blogs.lib.ku.edu/spencer/repairing-zapalote-a-conservation-treatment-for-a-lithograph-by-mary-huntoon/ 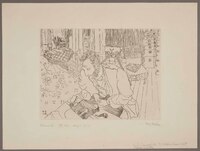 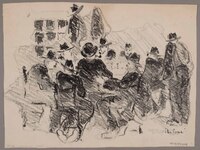 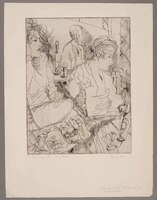