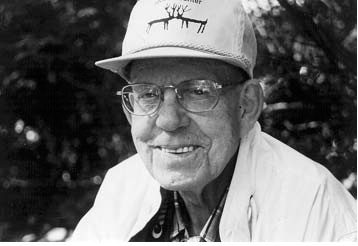 Dr. Albert Scheven (1913-2000), former professor of East African Languages at the University of Illinois Urbana-Champaign, from whom much of the KU Swahili collection was purchased.

The Swahili language and literature collection held by the University of Kansas Libraries includes approximately 1,000 volumes both in and about the language.  In addition to the representative works of various literary genres included in this exhibit, the collection includes dictionaries, grammars, linguistic works, collections of proverbs, literary criticism, pedagogical materials designed for language learning and teaching, literary texts translated into Swahili, the history and development of the language, and studies of Swahili culture and the people of the East African coast, among whom it is spoken as the indigenous language.

The collection includes several notable early volumes, such as the Dictionnaire Swahili-francais by Charles Sacleux (Paris : Institut d’ethnologie, 1939), African aphorisms, by William Ernest Taylor (London : Sheldon, 1924, 2nd ed.), A Standard English-Swahili dictionary by the Interterritorial Language Committee of the East African Dependencies under the direction of the late Frederick Johnson, by Frederick Johnson (London : Oxford University Press, 1939), and Dictionnaire Swahili-francais, by Alphonse Lenselaer (Paris : Editions Karthala, 1983).  Together with earlier works published prior to 1923, such as C. Velten’s Prosa und poesie der Suaheli (Berlin : C. Velten, im Selbstverlag des Verfassers, 1907) that are now available full-text on Hadhi Trust, the collection includes a considerable body of early publications of note that are important contributions to the documentation of Swahili language usage and development.

Many of the holdings in the University of Kansas Libraries were acquired from the collection of the late Albert Scheven, a former language professor at the University of Illinois Urbana-Champaign.  Prof. Scheven became a master of several East African languages, namely Kiswahili, Kisukuma, and Dholuo, while serving as a missionary in Tanganyika for over 30 years.  From 1972 to 1984, he served as an instructor of Swahili and other East African languages at UIUC (Habari, 2001: 7).  He collected many works on the language for his private collection and developed his own instructional materials during his teaching career.  As a scholar, Scheven specialized in the collection, interpretation, and translation of methali, or Swahili proverbs, and compiled what remains to this day as the most comprehensive such collection.  In his own words, it is “a comprehensive compilation of all Swahili proverbs found in the published sources of all languages, but directed to those who know English” (Scheven, 1981: vii).  The work includes over 2,050 entries.

The late Prof. Scheven offered his rich collection of Swahili materials for sale shortly before his death in 2000, (News-Gazette, 2001: B6) and it was purchased by the University of Kansas Libraries.  The Libraries are fortunate to own the many items collected by this noted scholar and teacher.  They form the cornerstone of the collection.