A Reflection of Genocide in Africa: Rwanda and the Herero

This exhibit is an exposition of the history, planning, development, and execution of the 1994 genocide in Rwanda, and the 1904 genocide against the Nama and Herero people of present day Namibia. The exhibit also clearly reveals the impact that these two genocides have had on the lives of survivors, perpetrators, and their families and communities.

In the Shadow of Cortés: From Veracruz to Mexico City

In Fall 2016, KU Libraries partnered with the Center for Latin American and Caribbean Studies (CLACS) to bring the traveling exhibit In the Shadow of Cortés: From Veracruz to Mexico City to Spencer Research Library. The photographic exhibition was designed and prepared by Indiana University Professor Kathleen Ann Myers, with photographs by fellow Indiana University professor and renowned National Geographic photographer Steve Raymer.

The traveling exhibition contained thirty photographs interspersed with seven text panels of contextual information. English and Spanish exhibit handouts showed thumbnails of the photographs with captions. These three documents are reproduced, with permission from their author Kathleen Ann Myers, in the Traveling Exhibition section of this online exhibit.

In conjunction with the traveling exhibition, Spencer Research Library showcased original books and maps, including some modern editions and facsimiles, related to Cortés and the conquest. These are the materials reproduced here, with their exhibit labels.

Additional online information about this exhibit includes the IU press release, the KU Libraries press release, and KU Libraries Flickr albums showing photographs of the exhibit reception at Spencer and of the Aztec dance group Huitzilopochtli on campus.

This is an online version of a physical exhibit that was on display in Kenneth Spencer Research Library, August 2016 through January 2017. The exhibit was created by Caitlin Donnelly Klepper and Kathy Lafferty, Public Services.
Contact Caitlin or Kathy for questions.

Funding for this exhibit came from the Moveable Feast of the Arts Program at Indiana University Bloomington. Created through a generous gift from the Lilly Endowment Inc., the program was initiated by the IU Office of the President with oversight provided by the Office of the Vice Provost for Research.

Easter 1916: Rebellion and Memory in Ireland 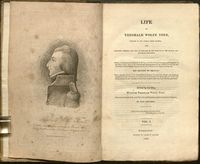 On Easter Monday, April 24, 1916, armed nationalists occupied sites around Dublin and proclaimed the establishment of an Irish Republic independent from England. Outgunned by incoming Crown forces, the rebels surrendered within a week. The rising’s leaders were quickly executed and many others interned. With over 400 dead and prominent Dublin thoroughfares damaged by shelling and artillery fire, the debates over Easter week’s legacies began. Was the rising a heroic sacrifice in the name of Irish independence, or treasonous and needless bloodshed in a time of world war, or something more complex? In his poem “Easter, 1916,” W. B. Yeats famously wrote of the rebellion and its executed leaders, “A terrible beauty is born.” One hundred years later, this exhibition returns to that fraught week to explore its place in the history of Irish independence.

This is an online version of a physical exhibit that was on display in Kenneth Spencer Research Library, January through April of 2016. The exhibit was created by Elspeth Healey, Special Collections Librarian.

Admitted to the University of Kansas from its beginning, women have always been welcome on the hill. However, welcome would not be enough when the women’s rights movement swept the campus in the late 1960s and early 1970s. Before then, for KU women and those across the country, a women’s virtue was upheld through restricting rules and regulations.

Student personnel administrators like the Dean of Women fulfilled the university's responsibility for in loco parentis. As such, they provided discipline in place of the student’s parents on behalf of the university. KU women were accustomed to this type of control through the 1950s.

Concerns over these restrictions and other women's issues started to grow in the 1960s, reaching its peak in February 1972. A group of women calling themselves the February Sisters occupied the East Asian Studies building overnight and presented a list of demands. They hoped to gain equal opportunity for women and certain services like a day care center on campus. Supported by then Dean of Women Emily Taylor, the group succeeded in getting most of their demands realized.

In this exhibit can be found original documents, photographs, and memorabilia that tell the story of the women’s right movement at the University.

This is an online exhibit from Fall 2015. The exhibit was created by Letha Johnson, Associate Archivist, University Archives, Kenneth Spencer Research Library.

In honor of his life and legacy of giving, fostering the ideals and practices of diversity, and requiring high standards of excellence, the African American Experience Collections presents the Michael G. Shinn: Premier Jayhawk Leader and Innovator exhibition. It features items from the Shinn Family Collection, which he first established in 1991 by donating papers and photographs from his family’s home in Topeka, Kansas and from resources in University Archives.  The exhibition’s narratives about Mr. Shinn’s family, KU student years, and Career/Community experiences were researched and written by Paul Edward Fowler III, graduate student assistant for the African American Experience Collections and a graduate student in KU’s African and African American Studies Department.

Achievement of a Dream: The Birth of the University of Kansas

"Every enterprise has its epochs--resting points whence the past, with its triumph or defeat, may be contemplated, and the future, bright or shadowy, be dwelt upon." So Solon O. Thacher began his address before the people who had gathered on the occasion of the opening of the University of Kansas on September 12, 1866. The celebration of the University's sesquicentennial can certainly be viewed as an epoch or resting point to contemplate the past and dwell upon a bright future.

The establishment of a state university was contemplated even before Kansas officially became a state in 1861 but was not accomplished without disagreement and strife. The title of the first chapter of Clifford S. Griffin's seminal book on the University's history published in 1974 was appropriately named "The Years of Frustration" as decisions about the location and funding sources were mired in territorial and state politics for many years.

In this exhibit can be found original documents, photographs, and memorabilia that tell the story of the early years of the University from its beginnings in 1865 to the turn of the twentieth century.

This is an online version of a physical exhibit that was on display in Kenneth Spencer Research Library, September through December of 2015. The exhibit was created by Rebecca Schulte, University Archivist. 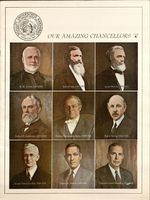 Today, the role and responsibilities of the Chancellor of the University of Kansas, while not having changed significantly, are simply stated as:

"..the chief executive officer of the University of Kansas, overseeing campuses in Lawrence, Kansas City, Overland Park, and Wichita in addition to research and educational centers in Topeka, Hutchinson, Parsons, and elsewhere in the state."

One thing that has remained the same over the years is that the Chancellor plays a key role in steering the University of Kansas forawrd to meet the current and future needs of its community at the local, state, and global levels.

"KU Football: the First Seven Decades" is an online photograph exhibition of the first seven decades of KU Football (1890 through 1955), featuring images from the University Archives at the Kenneth Spencer Research Library.

John Gould: Bird Illustration in the Age of Darwin

John Gould (1804-1881) contributed to burgeoning scientific and popular interest in the natural world in Victorian England as an ornithologist, collector, and illustrator and publisher of bird books. He assisted Charles Darwin with classification of bird specimens collected during the H.M.S. Beagle’s visit to the Galapagos Islands in 1835. Gould and his artist wife, Elizabeth (1804-1841) traveled to Australia in 1838. Two years engaged in pioneering studies of Australian wildlife resulted in the seven-volume Birds of Australia (1840-1848) and three-volume Mammals of Australia (1845-1863). Partnering with other illustrators after his wife’s death, Gould published a dozen folio-size books about birds of the world.

Fifty years ago Laird Wilcox was a student at the University of Kansas.  Beginning in his teen years he had been collecting political literature, fueled in this interest by his diverse family leanings and volatile discussions over family meals. He wanted to understand what motivated people to believe the things they did and act on those beliefs, especially those beliefs and actions that were viewed as left and right wing.  And he believed passionately in free speech.

In his student days he served as the chairman of the SUA Minorities Forum at KU, an organization that sponsored many films, talks and programs aligned with free speech and the controversies of the time.  It was the era of the Vietnam War, the draft, the Civil Rights Movement, and student protest.

By 1964 he had exhibited his collection in the student union at KU, and won an award through the Libraries’ Taylor Book Collecting Contest..  The KU Libraries expressed  interest in acquiring his collection, and in 1965 purchased the four filing cabinets of materials that would form the nucleus of the Wilcox Collection of Contemporary Political Movements.

After leaving the University, Wilcox continued to pursue his long held interest in extremist views, corresponding with many active in a variety of movements, attending rallies and  protests, collecting box loads of materials, publishing  directories of  left wing and right wing organizations.  All this material made its way to Spencer Library where it was added to the Wilcox Collection.

Likewise the library  added to the holdings with paid subscriptions to many serial publications, and the purchase of books, pamphlets and audio recordings.  The Collection  grew rapidly, as box loads of materials were received monthly.  By the 1980s the collection had outgrown the library’s capacity to catalog everything, and a U.S. Department of Education grant  was obtained in 1986, providing some $350,000 over a three year period to catalog all the serial publications and ephemeral files.

Today the Wilcox Collection is one of the largest assemblages of left and right wing U.S. materials anywhere.  There are thousands and thousands of pamphlets, books, newsletters, audio recordings, and political ephemera such as bumper stickers, posters, flyers, organizational membership mailings, book catalogs, relating to some 10,000 organizations at the fringes of the political spectrum.  There is also a growing component of manuscript collections as well, including Laird Wilcox’s personal papers, and records from such organizations as the New York based  Women for Racial and Economic Equality.

Researchers come from all over the world to use the Wilcox Collection, finding resources that are hard, if not impossible to come by elsewhere.  The library continues to receive donations from Laird Wilcox, and many others who support the collection.

This is an online version of a physical exhibit that was on display in Kenneth Spencer Research Library, January through June of 2015. The exhibit was created by Rebecca Schulte, Curator of the Wilcox Collection.