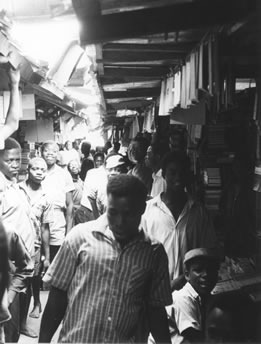 The unique Onitsha Collection in the Spencer Research Library at the University of Kansas (KU) acknowledges and promotes the important role of Onitsha Market Literature in detailing what Chinua Achebe describes as the "social problems of a somewhat mixed-up but dynamic, even brash, modernizing community."[1] Included in the collection are stories, plays, advice and moral discourses that were all published by local presses in the 1960s in the market town of Onitsha on the Niger River in southeastern Nigeria. The chaos, color and noise of Africa’s largest market come alive in this vibrant milieu. Emmanuel Obiechina, a prominent scholar of Onitsha market literature, argues that this African popular literature is "an integral, if unique and startling, part of the West African creative scene."[2] These voices from the bookstalls of an African market enhance our understanding of other cultural contexts and provide valuable perspectives on a wide range of themes.

The Onitsha collection at KU consists of an array of popular literature collected in 1966 by Thomas R. Buckman, former KU Director of Libraries. Buckman described the works as representing “a unique form of popular literature in Africa” that reflected “the serious concerns and social tensions of many of the people” in newly-independent Nigeria. [3] Many pamphlets were handbooks offering advice in the face of adversity--grave or light (Trust No-Body in Time Because Human Being Is Trickish and Difficult). Much of the literature focuses on love relationships and illustrates a moral as the drama ends in disaster (About the Husband and Wife Who Hate Themselves). Some of the booklets detail trials and tribulations that a protagonist must overcome to achieve success in the fast-paced urban environment of West Africa (No Condition is Permanent). Buckman noted that the popularity of the works, often for sale at about $.35 a copy, was evidence of "the great thirst for general reading matter among the growing literate population."[4]

Scholars and librarians in the field cite the University of Kansas collection of Onitsha market literature as a significant contribution to resources exemplifying this genre.In an early bibliographic compilation from 1967, Bernth Lindfors featured the Spencer Research Library collection as one of a few such repositories in his preliminary list of holdings from several collections.[5] More recently the publication of an extensive checklist compiled by Peter Hogg and Ilse Sternberg once again featured the University of Kansas holdings and even reproduced a fine photograph of the Onitsha market bookstalls taken by Buckman in 1966, just prior to the outbreak of the Biafran War when the Onitsha market and its bookstalls were destroyed.[6]

As an indication of broader interest in the Onitsha market pamphlets among scholars and students of African studies, access projects for two other collections have recently been completed by the Center for Research Libraries and at the University of Indiana. The Cooperative Africana Microform Project (CAMP) recently microfilmed 78 pamphlets. [7] Marion Frank-Wilson, Bibliographer of Africana at University of Indiana Libraries, has mounted a web list of the 173 titles in the University of Indiana collection. [8] This KU initiative, however, is the first full-text digitization of the pamphlets, thus making them available to a worldwide audience via the Internet.

Onitsha market literature is grounded among the masses, and it is their voices that we hear in this amazing collection. The works were aimed at the new literate class of Nigerians such as taxi drivers, mechanics, white-collar clerks, primary school teachers, small-scale entrepreneurs and traders. [9] In simple English basic concerns about sex, money and style enthralled a vibrant cross-section of Nigerians. [10] Local publishers supplied creative and enticing reading matter to a public with a literary appetite that in turn gained confidence in the local uses of English. Scholars hail this popular literature, in part “conditioned and compromised by the marketplace,” as a major impetus for an eager literate public to experiment with more serious and dynamic works of creative writing. [11]

Although African literary artists such as Chinua Achebe, Mariama Bâ, Wole Soyinka and Ngugi wa Thiong’o hold well-deserved positions of honor as the creators of beautiful and exceptional literature, most of the authors of popular market literature remain unknown and unseen beyond the market. This initiative introduces these ‘invisible’ authors to the widest audience possible--the Internet, and provides a context to fully understand and appreciate this literature for the masses. The style of the market literature is firmly grounded in African oral traditions with plays, riddles and jokes as common features. [12] Thus, the Onitsha pamphlets reflect earlier African oral texts and their rich histories. The digitization of a portion of KU’s Onitsha collection permits the cultural heritage embedded in these publications to gain notoriety through contemporary technological channels. Just as eager readers purchased Nigerian market literature 40-50 years ago, this initiative makes Onitsha pamphlets accessible once again to a wide-ranging readership on the Internet.

← Uses of the Collection
Onitsha Authors →