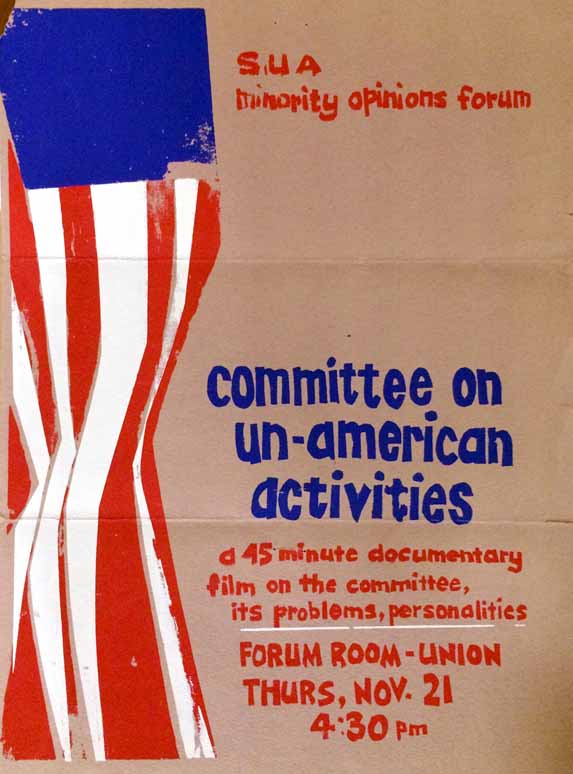 Fifty years ago Laird Wilcox was a student at the University of Kansas.  Beginning in his teen years he had been collecting political literature, fueled in this interest by his diverse family leanings and volatile discussions over family meals. He wanted to understand what motivated people to believe the things they did and act on those beliefs, especially those beliefs and actions that were viewed as left and right wing.  And he believed passionately in free speech.

In his student days he served as the chairman of the SUA Minorities Forum at KU, an organization that sponsored many films, talks and programs aligned with free speech and the controversies of the time.  It was the era of the Vietnam War, the draft, the Civil Rights Movement, and student protest.

By 1964 he had exhibited his collection in the student union at KU, and won an award through the Libraries’ Taylor Book Collecting Contest..  The KU Libraries expressed  interest in acquiring his collection, and in 1965 purchased the four filing cabinets of materials that would form the nucleus of the Wilcox Collection of Contemporary Political Movements.

After leaving the University, Wilcox continued to pursue his long held interest in extremist views, corresponding with many active in a variety of movements, attending rallies and  protests, collecting box loads of materials, publishing  directories of  left wing and right wing organizations.  All this material made its way to Spencer Library where it was added to the Wilcox Collection.

Likewise the library  added to the holdings with paid subscriptions to many serial publications, and the purchase of books, pamphlets and audio recordings.  The Collection  grew rapidly, as box loads of materials were received monthly.  By the 1980s the collection had outgrown the library’s capacity to catalog everything, and a U.S. Department of Education grant  was obtained in 1986, providing some $350,000 over a three year period to catalog all the serial publications and ephemeral files.

Today the Wilcox Collection is one of the largest assemblages of left and right wing U.S. materials anywhere.  There are thousands and thousands of pamphlets, books, newsletters, audio recordings, and political ephemera such as bumper stickers, posters, flyers, organizational membership mailings, book catalogs, relating to some 10,000 organizations at the fringes of the political spectrum.  There is also a growing component of manuscript collections as well, including Laird Wilcox’s personal papers, and records from such organizations as the New York based  Women for Racial and Economic Equality.

Researchers come from all over the world to use the Wilcox Collection, finding resources that are hard, if not impossible to come by elsewhere.  The library continues to receive donations from Laird Wilcox, and many others who support the collection.

This is an online version of a physical exhibit that was on display in Kenneth Spencer Research Library, January through June of 2015. The exhibit was created by Rebecca Schulte, Curator of the Wilcox Collection.

Extremism in America : a reader