The items displayed here document Dr. James Naismith’s time at Springfield College and the creation of the game of basketball. All of the photographs, publications, and documents can be found in the Springfield College Archives and Special Collections. James Naismith’s collection is just a small part of the College Archives that highlight not only the history of Springfield College and the creation of Basketball, but also the history of the YMCA, Physical Education, Recreation, the Olympics, the invention of Volleyball, and the philosophy of Humanics.

James Naismith came to Springfield College, then the International YMCA Training School, in 1890 for a special one-year program to train as a YMCA Physical Director. The campus at that time was in a single building on the corner of State and Sherman streets in Springfield, Massachusetts. The building has often been a source of confusion. Notice the prominence of the sign in the old photograph, carrying the words “Armory Hill YMCA.” This has led some to believe, erroneously, that the Armory Hill YMCA owned the building, and that Naismith was an employee of the YMCA.

Upon completion of the one-year program, Naismith took a position as a full-time faculty member at Springfield College, a position he kept through the spring of 1895. Urged by Luther Halsey Gulick, the college’s superintendant of the physical department, to create a new indoor game “that would be interesting, easy to learn, and easy to play in the winter and by artificial light,” Naismith responded. After trying several different ideas, he settled upon a game that required two teams, two peach baskets, a ball, and thirteen rules. No other sport’s popularity has spread as quickly. The announcement in The Triangle, a magazine created and published at Springfield College, and the international structure of the school and the YMCA really propelled the rapid adoption of the game world-wide. 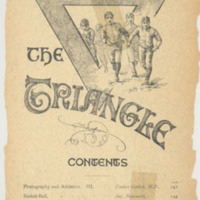 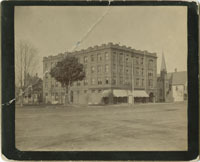 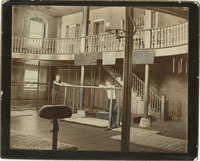 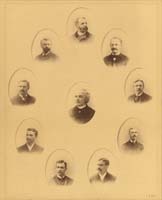