As the official repository of the University’s administrative records, the McGill University Archives holds the traces of Naismith’s presence at this institution. The records of the Office of the Registrar reveal his student directory card, documenting the sessions he attended at McGill from 1883 to 1887, and tracking his subsequent positions. Naismith’s studies focused on philosophy and Hebrew, and led to his graduation with a BA in 1887. It is said he arrived here with the intention of abstaining from athletic activity in order to concentrate on his studies. But we also know that he did not resist the draw to athletics for long: we soon find him participating in football and ground gymnastics as an undergraduate. William Notman’s and A.G. Walford’s group portraits of the football team are found in the records of the Department of Athletics and Physical Education. The inscription on one photograph indicates his position as “forward”.

Early on in Naismith’s time at McGill, we see his leadership and engagement is organizing athletic activities. He appears as a founding member in the minute book of the McGill University Athletic Association in 1884. A minute book entry for March 23, 1886 finds him involved in the planning of the Annual Sports of ’86.

After graduation, Naismith enrolled in the McGill-affiliated Presbyterian College. But his studies for the ministry were cut short. His reputation in athletics prompted an invitation by McGill to take on the post of Instructor in Gymnastics. The Minutes of the Board of Governors document his appointment in 1888, and the continuation of this appointment in 1889. In an entry for September 26, 1890, his letter of resignation is recorded. Addressed to Principal and Vice-Chancellor William Dawson, the letter conveys his intention to leave McGill to study in Springfield, Massachusetts.

McGill University is proud of its long tradition of higher learning that dates back to its founding in 1821 by Royal Charter from King George IV. The University Archives preserves the memory of that tradition, and the documents pertaining to all those who have passed through its study halls—James Naismith, the subject of this very exhibition, among them. 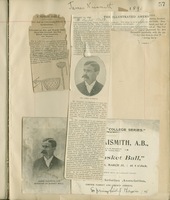 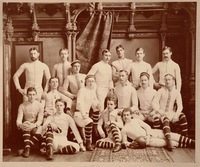 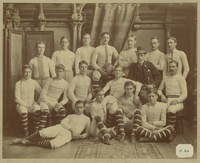 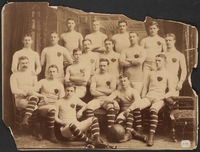 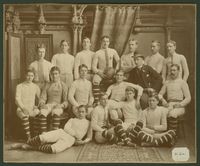