The Women’s Athletic Association (WAA), under the auspices of the Department of Physical Education, was formed in 1912 and reorganized in 1916. By the early 1920s, the group had developed a point system for the awarding of letters and sweaters to members.  The early years were marked by a struggle to find adequate funding and facilities. Nonetheless, under Ruth Hoover’s direction, the WAA and Women’s Physical Education greatly expanded the opportunities for women to participate in athletics through both intramurals and intercollegiate competitions.

Over the years, the WAA and intramurals intertwined, and the name of the organization was changed to the Women’s Recreation Association (WRA).  The women were largely responsible for supplying their own equipment and transportation.  Many of the women’s teams were able to compete in the Big 6 and Big 8 conferences, even though they were officially clubs funded mostly by the Student Senate.  That changed when Marlene Mawson organized the first official program of intercollegiate athletics for women in 1968.

WAA page from the 1916 Jayhawker yearbook.

WAA page from the 1916 Jayhawker yearbook. 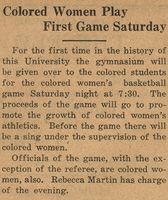 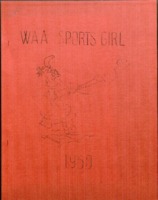