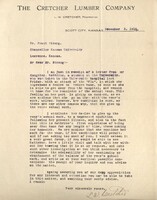 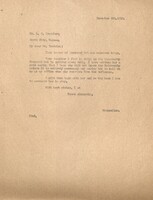 Chancellor Frank Strong corresponded with L.W. Cretcher, proprietor of The Cretcher Lumber Company, and his daughter, Kathryne, a freshman at the University during the campus flu epidemic. Mr. Cretcher wrote to Chancellor Strong concerning his daughter, who was hospitalized with the flu and was contemplating leaving school and returning home. Kathryne must have been swayed by the Chancellor because her record shows that she stayed through her junior year. For more on this story, see this article that appeared in the Lawrence Journal World. 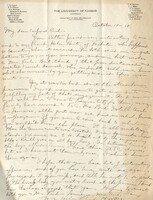 Corporal Horace "Hod" Hakes Rich was attending the University of Kansas when his education was interrupted by service in the U.S. Army during World War I. He enlisted in an ambulance company, but only got as far as training at Camp Sherman in Chillicothe, Ohio. While there, his company was hit hard by influenza, delaying training and causing the death of many recruits. Rich himself never caught it, and the Armistice brought an early end to his military career. Shown here is a letter Rich received from Helen Hoopes, Professor of Rhetoric and English from 1914 to 1947. In her letter, she described how the flu epidemic had impacted the University. After the war, Rich returned to the University and earned his Law degree in 1921.

To read more written by Corporal Rich about his experience in the Army during the influenza epidemic, go to the tab at the top of this page entitled "More on the Army Experience of Corporal Rich."

Edgar H.S. Bailey, Professor of Chemistry, Mineralogy and Metallurgy, wrote this letter to his son, Herbert S. Bailey, on October 18, 1918. In it he refers to the quarantine and describes what conditions are like in Lawrence, Kansas, as a result of the flu epidemic. An except follows.

"We are certainly 'in it' now. The city is fairly free from Flu but there are occasional fatal cases. Dr. Jones has been quite sick for a week, but is resting a little better today, and taking a little food. He was worn out with too much medical work. At the Barracks Hospital, there have been 5 deaths, and everybody is as busy as can be. Two of the women in my dept. are conducting the Dietary for 270 men in the hospital. New ones are constantly coming in and old patients are discharged. It is fine, the way in which everybody takes hold. We all send all the sheets, and pillows and pajamas that we can spare, and a lot of the college women are acting as red cross nurses.

The University did not start until Oct. 2, and then after 4 days a quarantine was declared, and now it has been extended until Oct. 28, so no Univ. classes until that time. The prompt action of all the state and Univ. authorities has saved us a lot of danger, and many deaths, I feel sure."

← Timeline
More on the Army Experience of Corporal Rich →