In the fall of 1918, at the height of American involvement in World War I, the United States War Department established the Student Army Training Corps (S.A.T.C.). The University of Kansas, along with colleges and universities across the country, contracted with the government to make its faciliies available for officer training. The War Department's goal was to prepare 150,000 men nationwide. KU agreed to provide education, food and housing for up to 2,500 men, with the understanding that the War Department would reimburse the University. Retired Major Bruno T. Schér of the U.S. Army was assigned to supervise the men and coordinate the training. Coinciding with the swearing-in of the first group of S.A.T.C. servicemen on October 1st, the influenza epidemic that had been sweeping across the country arrived in Lawrence. In the S.A.T.C. barracks, where servicemen were living in very close quarters, the disease spread rapidly.

Shortly after the announcement of the creation of the S.A.T.C., it was announced that KU would be the first university in the nation to host officer training for the United States Navy. The Naval Station in Kansas City was responsible for setting up the program and providing instruction. The program was run much like the S.A.T.C., and enlistees were considered both students and members of the military.

The Jeffersonian Gazette (Lawrence, Kansas) announces the establishment of a Naval training program at the University of Kansas. 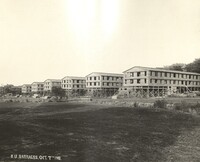 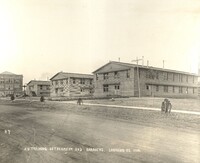 To house the men of the S.A.T.C. and Naval School, KU built twelve barracks on Mississippi Street and between the Engineering buildings on the hill. Several of these temporary buildings were used as infirmaries during the worst of the flu outbreak. 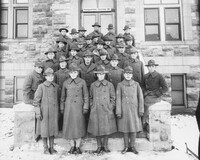 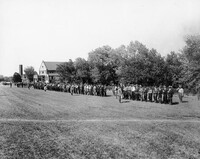 Taken along Mississippi Street, facing east. Today the football practice fields would be to the rear of the photographer.

For more information on World War I training that occurred on KU's campus:

Hello, I Must Be Going