Mary Evelyn Ransom Strong (1870-1953). A fervent proponent of women’s suffrage and equal rights, Mary served as vice-president of the Douglas County Suffrage League. She often spoke at suffrage meetings and conventions throughout northeast Kansas, supporting those already involved in the movement and encouraging new membership. Her husband, Franklin Strong, was chancellor of the University of Kansas from 1902 to 1920. 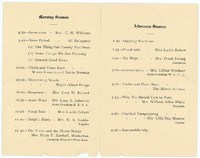 A story in The Leavenworth Times on April 18, 1912, covered the First Annual Meeting of First Congressional District, Equal Suffrage Association, Leavenworth, Kansas. Mary Strong was one of the speakers. Her name appears in the meeting program, along with the title of her talk, “My Hope.”

Below is an excerpt from her speech:

“Has not woman an individuality as important and precious as that of man? And shall she not have the same freedom to develop her powers as man has? Responsibility is placed upon us all. Upon women as well as upon men. But responsibility involves rights and powers. It depends upon the freedom of the individual. It is the right of women that they assume such responsibility as naturally comes to them. The obligation to service lays a duty on women to widen their influence and power. This obligation is rapidly enlarging – it is not only a state and a national but a world obligation. Women cannot meet this obligation unless they are unhampered in their relation to the world – unless they can assume the same relation to the problems of the world that man can assume. Their duty in the way of service to others demands that they free themselves from restrictions on their influence and rights. This demand is based on justice – on elementary justice – upon the fundamental moral right which is, that every woman has a right to fully develop her life and to protect herself and her interests.” 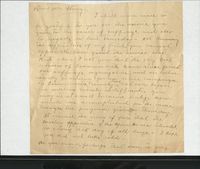 I shall never cease to be grateful to you for the service you gave to the cause of suffrage and also to myself on last Thursday – Not knowing the difficulties of my field, you cannot appreciate how great the service was. But when I tell you that the very best women of Leavenworth have since joined our suffrage organization, and are enthusiastically planning for our active campaign – in Leavenworth County – most that were before our meeting entirely indifferent – you may in a small measure realize how much was accomplished for the cause through the program given on Thursday.

It seemed the irony of fate that the heating apparatus of the Opera House should go wrong that day of all days – I hope you did not take cold.

As you know, perhaps, that there is very… 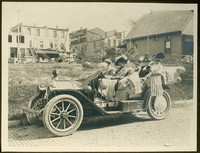 "Votes for Women." Mary Strong rides in a car decorated in support of Women’s Suffrage. Mary is in the back seat, in the black coat. Others in the car include Clement Perkins, Mrs. Paul R. Brooks, Miss Florence Payne, Miss Dorothy Williston, and Marcella Chalkley. The women were participating in an automobile parade at the Douglas County Fairgrounds, 1912.

Chancellor Frank Strong was a strong and vocal proponent of the rights of women. Shown here is a portion of his quote in the University Daily Kansan, Thursday, March 16, 1911.

“I believe that if our state legislature were largely made up of women, that higher education would be the last thing to be sacrificed to political expediency, instead of the first.

I have three women at my house—my wife, my daughter, and my mother, and I fail to see why they should not have as good a right to vote as myself. When the amendment to the constitution comes up at the next election, I shall vote ‘yes,’ and I sincerely hope that the amendment will pass.”