Professor Kate Stephens (1853-1938). A graduate of the University of Kansas, Dr. Stephens was professor of Greek languages and literature at KU from 1878 to 1885, and became the first woman to chair a department at KU. She was a fervent proponent of women's suffrage and women's rights throughout her life, writing and speaking on such topics frequently. 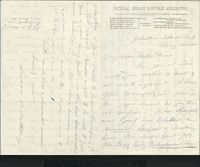 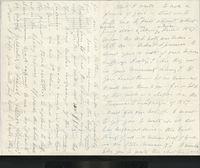 Are you at home – and are you rested & well & at work again? – I have often thought of you during the year since we parted in Berlin! How shamefully our Gov’t has treated our Minister Sargent – making him the Scape-Goat for Old Fogy Seig Frelinghuysen’s Sins!

But I write – to ask a favor of you – that is – to help me to the facts about what women have done or are doing – in Kansas since 1867 – when the W.S. vote was taken – Let’s see – Didn’t I promise to send you a set of our Woman Suffrage History? Are they not in your University Library? If you haven’t them – let me know – and I will send them to you – for in vol. II, of that work is a chapter on the Kansas Campaign of 1867 - - and for our vol. III, I want to get you to write up all that has happened since – the best thing of all – a woman prof. of Greek in the State University! I would like you to write the chapter – and for your dear Father to make it possible for us to have an engraving of the lady Greek Professor’s face to head the Chapter – an engraving with copies enough for the first edition costs $125 – We shall have twelve engravings of the younger women who have made a mark in some line of work – in our 2nd volume – and we ask the friends of those entitled to a place to help us in the heavy expense – Of course the whole book is an immense dead expense to me – as it has to be mainly presented to School & village libraries! Now I hope you will feel able to write this Chapter & your Papa to furnish the engraving! -- Miss Sarah Brown ought to be able to give you a great many facts – as she has been interested ever since ’67!! – But some woman in Kansas must write the chapter – and I do hope you can do it!

With much love & [pleasant] memories –

P.S. Do you know if the Sargents are coming home soon?

The Graduate Magazine, volume 8, number 7, April, 1910. “Taboo the Word, ‘Co-Ed’.” Professor Stephens was a prolific writer, and often contributed articles to the alumni magazine of the University of Kansas, her alma mater. In this article, she argues against the use of the term “co-ed” because it both demeans women and assumes the superiority of male students. She is particularly disappointed that her alma mater is using the term, and believes that the editor of the magazine can use his influence to get it to stop.