Evidence suggests that the KU League only existed until 1912, and disbanded after women in Kansas had been granted the right to vote in national elections. An article in the December 12, 1912, issue of the University Daily Kansan reports that the League met to “decide whether or not to disband, now that suffrage has carried in Kansas.”  There is no mention of the KU League in the university yearbook or newspaper after this date, and, unfortunately, there are no archival records for the League in existence.

Top: Entry in the 1909 Jayhawker yearbook, describing the League for the first time.

Bottom: Article in the January 28, 1909 University Daily Kansan, announcing the formation of the League.

Membership consisted of students, faculty and staff. The first administrative sponsors of the KU league were Dr. William H. Carruth, Professor of Germanic Languages and Literature, Dr. Arvin S. Olin, Professor of Education, and Carrie Watson, Librarian. Student leaders were chosen from among the members. The women shown here were the officers of the KU chapter of the College Equal Suffrage League for 1909 and 1910. Also shown is the often patronizing write-up that accompanied their senior class pictures in the yearbooks. 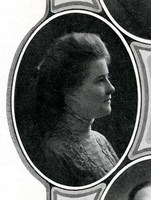 Jessie Baldridge, A.B., Liberal Arts [President, 1909]
La Junta, Colorado
Kappa Alpha Theta, Sophomore Prom Committee, Junior Prom Committee,
Junior Farce, President of College Equal Suffrage League, Senior Play
“Susan B. the Second, princess of the Suffragettes, and yet has as many friends
among the boys as the next one. Last year it was feared that she would join the
army but we notice this year that she has laid her “arms by” and joined the
Suffragettes instead. She would have voted for Carruth in the spring election
if she hadn’t forgot to register. Colorado had an evil effect upon her.” 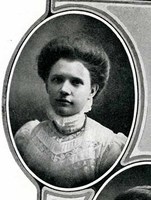 Mary Elizabeth Parker, A.B. [Secretary, 1909]
Lawrence [Kansas], “Maybeth”
Y.W.C.A.
Chairman of Student Government Committee
“Her one great sorrow is that she could not persuade “Lummie” to join the
Woman’s Suffrage movement. In addition to many other duties, social and
intellectual, Maybeth cheerfully espoused the cause of the suffragettes.
Owing to her ardent support, that band of martyrs has made a stir in feminine
circles this year.”

Florence Hackbusch, A.B., Liberal Arts [Treasurer, 1909 & 1910]
Leavenworth [Kansas]
Phi Beta Kappa
Y.W.C.A.
W.S.G.A. [Women’s Student Government Association]
“Florentine never hesitates to demonstrate with a flourish the ascendancy of
noble woman. She possesses a great strength of her own convictions, and has
even had the temerity to take a crack at Professor Boynton’s courses. As a
suffragette Florentine is a winner, and bids fair to languish in bastiles (sp)
right along with the rest of them.”

Laurenia Mervine Shaw, A.B., Liberal Arts [Vice-President, 1910]
Lawrence [Kansas]
Decorating Committee for Chancellor’s Inaugural
“Laurenia has Miss [Alberta] Corbin and the Woman’s Collegiate Suffragettes
Association backed clear off the boards when it comes to the strenuous upholding
of the rights of downtrodden woman. She is chief suffragette and general agitator,
and she has a falling for tall, good-looking men for escorts to dances. Is thinking
of going to England as soon as school is out, to kidnap the prime minister. Born in
the shadow of the capital, and is still old fashioned enough to have faith in the
practical application of the motto: “Honesty is the best policy.” 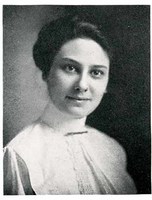 Elsie Louise Smith, A.B. [Secretary, 1910]
Leavenworth [Kansas]
Prom Committee
1912 Jayhawker Board
“By the way Elsie, which one do you like best anyway?”

“How the Vote Was Won” A play, co-written by Cicely Hamilton (1872-1952) and Christopher St. John (1871-1960), and performed for the first time at the Royalty Theatre, London, in April of 1909. Hamilton was a British author and playwright whose works advocated women’s rights. St. John, formerly Christabel Marshall, was an author, also involved in the suffrage movement.

The play is a one-act comedy written in support of women’s suffrage in Britain. The play opens in the living room of Horace and Ethel Cole of Brixton, London, on the day of a general women’s strike organized by Suffragettes. The strike is in response to the Government’s stance that women do not need to vote because the men in their family already take care of them. This prompts women who have previously been supporting themselves, independent of men, to agree to leave their jobs and homes and seek out the support of their nearest male relative. As Horace’s female relatives begin arriving at his home, one after the other, he comes to realize that something must be done, and he rushes to Parliament, along with all the other men in London, to demand “Votes for Women” as soon as possible. 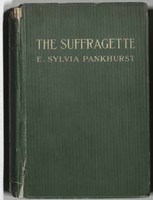 On Thursday, March 16, 1911, the University Daily Kansan headline read “Students Listen to Suffragette. Largest Chapel Crowd Since Football Season. Sylvia Pankhurst Tells Why Englishwomen Are Interested About College Women." Pankhurst was touring the United States to garner support for women's suffrage. Her talk was arranged, in part, by the KU College Equal Suffrage League. Pankhurst, daughter of British suffrage leader Emmeline Pankhurst, had been the featured speaker at chapel in Old Fraser Hall the night before.

Pankhurst, along with her mother, Emmeline, and sister, Christabel, were among the most dedicated and ardent activists for suffrage, often taking controversial, even violent, measures to draw attention to the cause. She was one of several suffragettes who spent time in British prisons for this activism. Between February 1913 and July 1914 she was arrested eight times, each time going on such persistent hunger strikes that she was force-fed. Her aunt, suffragette Mary Jane Clarke, died in prison on December 10, 1910, just three months before Sylvia spoke at KU. Her death was a result of being force-fed, a brutal prison method.

Sylvia visited the United States twice, in 1911 and 1912, holding speaking engagements to further the cause of women’s suffrage in the United States, and to promote her book, The Suffragette: the History of the Women’s Militant Suffrage Movement 1905-1910.

In 1918 the British government granted women over the age of 30 the right to vote. However, they put several restrictions in place that limited voting eligibility. Finally, in 1928, Parliament passed the Representation of the People (Equal Franchise) Act, extending the voting franchise to all women over the age of 21.