"Education is the mightiest weapon you can use to fight your way through." From a letter written by Fred Scott, published in The American Citizen, June 28, 1889, Osage City, Kansas.

AFRICAN AMERICANS HAVE ALWAYS PLACED A HIGH VALUE ON EDUCATION.  For more than three centuries, schools have served as their leading choice of weapon against chattel slavery and legal racial segregation, as well as, a means of self-determination and group advancement.

A desire for schooling helped spark their migration to Kansas during the Civil War. Unlike the South, Kansas white public opinion generally accepted their having access to schools, but not racially integrated schools. Not deterred, African Americans found ways to pursue their educational aspirations in Kansas.  They opened up schools in their homes, built the first school in Graham County, Kansas and flocked to charity and public schools that were available to them.

Whether or not African American students enjoyed equal access to elementary public schools in Kansas depended on where they lived. In 1879, Kansas law allowed racially segregated elementary schools in Leavenworth, Kansas City, Topeka, and Wichita, but not in places where the population was less than 10,000. Except for Kansas City, Kansas, Kansas law prohibited separate schools for African American high school students. Through petitions, protests, and litigation, including eleven court cases that reached the Kansas Supreme Court between 1881 and 1949, African Americans in Kansas sought to exercise their citizenship right to have equal access to public schools. Their efforts paid off. From 1890 to 1930, the percentage of African Americans in Kansas who could read and write increased from 67.2% to 91.2%.

This exhibition features materials from the African American Experience Collections in Kenneth Spencer Research Library that highlight the active role African Americans in Kansas played in our nation’s past struggle with laws and practices of racial segregation in public schools.  It emphasizes the leadership role Kansas African American communities played in resisting and navigating around barriers imposed on them in their effort to gain equal access to public schools. The exhibit concludes with the participation of Kansas African American parents and community activists in the five legal cases addressed in the 1954 Brown v. Board of Education of Topeka U.S. Court Supreme Court, which revolutionized the legal framework for race relations, sparked the Modern Civil Rights Movement and inspired struggles for freedom and equality around the world.

This is an online version of a physical exhibit that was on display in Kenneth Spencer Research Library, January through April of 2017. The exhibit was created by Deborah Dandridge, Associate Librarian for the Kansas Collection. 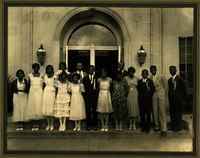 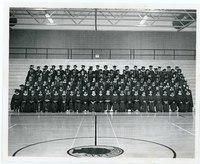 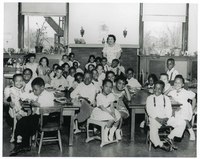