In 1954, when Mr. Jesse Milan began his professional career in Education as a physical education teacher and counselor in the Lawrence, Kansas public schools, he became the first African American teacher in the Kansas #497 Unified School District.  Later, Mr. Milan served as Assistant Professor of Education at Baker University.

From the Evening Dispatch of Leavenworth, Kansas in 1859 as reported in the Manhattan Express, Manhattan, Kansas, August 20, 1859:

For some three months, Mrs. Burnham, a colored woman, has been teaching a school for Negro children on the corner of Potawatomie and Third streets,,,,  While white folks have been wrangling as to whether colored children should be admitted into the public schools, Mrs. B. has gone to work and provided a channel through which they may receive instruction, and we believe she has been very generally seconded in her efforts by the colored population of the city. 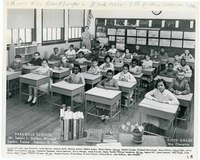 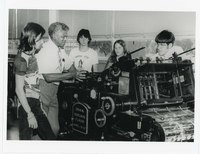 On May 17, 2004, in observance of the 50th anniversary of the 1954 Landmark U.S. Supreme Court decision in Brown v. the Board of Education, one of the most significant judicial opinions in our nation’s history, Topeka played host to thousands attending the grand opening of the Brown v. Board of Education National Historic site, a unit of the National Park Service. The movement to create the Historic Site began in 1990 when the Brown Foundation for Educational Equity, Excellence and Research, a local non-profit organization established in 1988, initiated legislation and garnered Congressional support for this site.  On October 26, 1992, President George H. W. Bush signed federal legislation officially adding the former Monroe School, which was once one of the segregated African American Schools in Topeka, Kansas, to the nearly 400 units of the National Park Service.   For the next twelve years, the Brown Foundation worked with the National Park Service to develop concepts for repurposing the facility and developing interpretive exhibits that would tell the story of Brown v. Board of Education.

Sitting on the stage is Cheryl Brown Henderson, founding President of the Brown Foundation and one of the daughters of the 1954 namesake, Oliver L. Brown.