“I Like to Make Things Work”: Kenneth Spencer, Engineer and Businessman

Possibly as far back as his days at KU, Kenneth dreamed of “running an integrated coal and chemical business.” He achieved this goal by the time he was 45 years old.

For almost 20 years, Kenneth simultaneously ran two large corporations headquartered in Kansas City: Pittsburg & Midway Coal Mining Company (P&M) and Spencer Chemical Company. By 1960, both had grown substantially under Kenneth’s leadership. First, the combined companies operated 30 sales offices, mines, and plants across Kansas, Missouri, and 14 other states. Second, Spencer Chemical became one of the leading manufacturers of industrial and agricultural chemicals in the United States and one of the largest businesses based in Kansas City. Third, P&M was one of the top 15 coal producers in the country; annual output exceeded four million tons, or $15.9 million in sales.

Adding to his significant workload, Kenneth was active with a number of other groups. He served on the boards of directors of a dozen large corporations, including AT&T, Goodyear, and Kansas City Power & Light. He also held leadership positions in several organizations, including the National Coal Association and the Department of Commerce’s Business Advisory Council. Kenneth’s contributions to the University of Kansas included 15 years of service to the KU Endowment Association as a member of the Board of Trustees (1944-1960) and the Executive Committee (1950-1960). 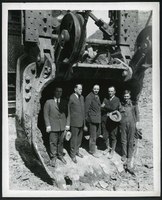 Kenneth Spencer (center) in a coal shovel with his brother Harold (far left) and father Charles (second from left), undated [circa 1929]

Kenneth grew up in the heart of Kansas’s coal mining district. In the early 1900s, more than 60% of the coal produced in the state came from Crawford County, home to 44 coal companies operating more than 60 mines and employing more than 7,000 miners.

Kenneth was the third generation of the Spencer family to be involved in coal. In 1880, his grandfather John W. Spencer entered the industry, which was still in its infancy in Kansas. Within 25 years, John owned or was an investor in several companies and numerous mines.

Kenneth’s father Charles was the president of P&M Coal Mining Company from 1911 until his death in December 1942. During that time, he modernized and expanded the company’s operations. An October 1966 article in Coal Age noted that in 1912, P&M produced 148,000 tons of coal. By fiscal year 1942-1943, the company’s production “exceeded one million tons for the first time.” Under Charles’s leadership, P&M became a “multistate organization with mines in Kansas, Missouri, Illinois, and Oklahoma.” After his death, renowned journalist William Allen White editorialized that “Kansas could have spared any other one man in all the state better than it could have spared Charles F. Spencer.” 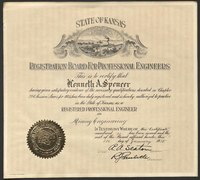 Kenneth began his engineering career while still a high school and college student. During successive summers, he worked at McNally Pittsburg Manufacturing Corporation as a boilermaker’s helper, apprentice machinist, and draftsman. An accident one summer cost him the end of a finger.

Kenneth began working at P&M as a junior engineer in 1925. Over the next 17 years, he was promoted to chief engineer, general manager, and treasurer. Simultaneously, in the 1930s Kenneth organized and led two other companies that resulted from his discoveries of coal deposits in Illinois.

Coal Age noted in June 1960 that Kenneth “demonstrated interest in improving coal-production methods” throughout his career. For example, in 1935 he invented a process for recovering pyrite from coal mine refuse “with the object of recovering good marketable coal and high grade pyrite suitable for numerous industrial purposes.” Kenneth organized the Mineral Products Company, a P&M subsidiary, to utilize the invention and served as its president. He patented the process in 1940. 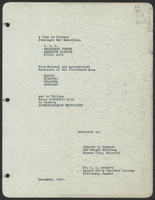 As war raged in Europe in 1940, Kenneth was among the leading advocates lobbying the federal government for the development of defense industries in the Midwest. Kenneth and P&M’s engineering department developed a proposal to demonstrate how a system of integrated manufacturing plants in Kansas, Missouri, Arkansas, and Oklahoma could utilize the area’s natural resources to produce military explosives. The proposal is outlined in this volume.

This “black book” has been referenced in several articles about Kenneth. KU’s Alumni Magazine (June 1960) described it as “an amazing diagram…that Kenneth Spencer planned in his careful, quiet way and went on to carry out in detail.” 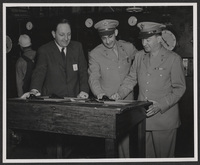 In July 1941, the War Department commissioned P&M to design, construct, and operate Jayhawk Ordnance Works in southeastern Kansas to produce synthetic ammonia and other munitions chemicals. Ground was broken on the plant in December 1941, and operations began 13 months later. Kenneth served as the president of the facility, which was operated by Military Chemical Works, Inc., a new wholly-owned subsidiary of P&M. Under his leadership, the plant received the prestigious Army-Navy “E” Award for "Excellence in Production" of military equipment.

Charles Spencer supported his son’s efforts to develop Jayhawk Ordnance Works. William Allen White wrote that Charles had “a sense of the tremendous possibilities for the chemical end of coal.” Moreover, as P&M’s president, Charles pledged the company’s assets as a performance bond on the project. 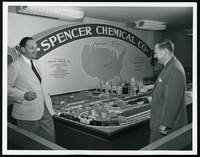 Despite the gravity of world war in 1940, Kenneth developed a plan in his “black book” with an eye toward the peacetime economy. He argued that factories producing military explosives during the war could be converted to civilian, commercial enterprises manufacturing chemical products like fertilizer and plastics.

Kenneth implemented this idea with Jayhawk Ordnance Works. He purchased the plant from the government, renamed it Spencer Chemical Company, and separated it from P&M. Kenneth served as the company’s president until 1959, when he became its chairman of the board and chief executive officer.

In 1960, Spencer Chemical acquired P&M as a wholly-owned subsidiary, making it a Fortune 500 company. Three years later, Gulf Oil acquired Spencer Chemical, joining other petroleum corporations in entering the burgeoning fertilizer industry. Under the $120 million agreement, Gulf purchased more than three million outstanding shares of the company’s stock – including 400,000 shares owned by Helen Spencer and Kenneth’s estate – for $41 a share. 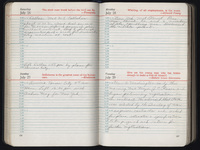 Kenneth once told a Kansas City Times reporter that “some men like to play poker and some like to play golf. I like to make things work.” Kenneth’s focus and drive are reflected in his appointment books.

Throughout much of his career, Kenneth frequently traveled across the country for business and professional meetings. He and Helen moved from Pittsburg to Kansas City in 1940, compelled by his weekly drives between their home and the Kansas City airport. While Kenneth negotiated the contract for Jayhawk Ordnance Works in the early 1940s, his most regular destination was Washingon, D.C. He averaged more than 25,000 miles of annual air travel from 1942 through 1945.

Kenneth’s demanding schedule came at a cost. In 1946, a doctor applauded his “excellent general health.” But, if Kenneth “wanted to feel as well at 65 or 75 as I do at 45…he strongly recommends that I place myself on a 5 ½ day work week.” Kenneth implemented this change, but by the 1950s he had returned to a six- or seven-day workweek. Allegedly, another doctor once told Helen that her health might benefit from divorcing Kenneth, thereby escaping his challenging schedule.