The Spencer Foundation supported small projects for the first 15 years of its existence. The organization’s coffers grew considerably after 1963 when Kenneth’s estate was settled and Gulf Oil purchased Spencer Chemical. As a result, Helen could initiate more substantial projects. The first of these was KU’s Kenneth Spencer Research Library.

Helen wanted the library to honor Kenneth and his principles. She wrote to a relative in 1968 that “the site where it is located is absolutely breathtakingly beautiful. It is a dignified and beautiful building…I do feel it is a great memorial to Kenneth and that was my intention.” Moreover, at the library’s private dedication on November 8, 1968, Helen remarked that the library would serve KU, undergraduates and graduate students from Kansas, and the Midwest – a region of which Kenneth was “fiercely and justly proud.” She added that, “as a business man and as a mining engineer, [Kenneth] was firmly convinced that the growth of science-based industries in the Middle West could occur only with the aid of strong educational institutions capable of inspired teaching with facilities for forward-looking research in the sciences.”

See the timeline behind you to learn more about the evolution and early history of Kenneth Spencer Research Library.

Even before Kenneth’s death, the Spencers were interested in supporting the efforts of KU Libraries.

Expressing his thanks for the advertisement, KU Libraries Director Robert Vosper wrote to Kenneth that “I have no adequate way of telling you how much this means to me and to the rest of us here in Lawrence who are concerned with pushing library programs forward. Your generosity and imaginative understanding are very much appreciated.”

Moreover, Wichita rare-book collector Robert T. Aitchison wrote to Kenneth that the advertisement “should help awaken some Kansas men to the need of a comprehensive book archive” in the state. “It is a damned shame,” he editorialized, “that one needs go to the Atlantic or Pacific Coasts to do research when the Mississippi Valley has every opportunity to get rare books – seemingly excepting cash.” Aitchison donated his collection of works by Roman poet Virgil to KU’s Special Collections in 1964. 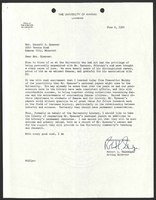 This letter, written less than four months after Kenneth’s death, started a conversation between Helen and the University of Kansas that culminated in the dedication of Spencer Research Library eight years later.

Responding to Talmadge on June 13, Helen stated that she was “sure this is exactly where [Kenneth] would want [his papers] and I am glad to grant your request…I am quite sure Mr. Spencer would have considered it a distinct honor to have his papers preserved at the University of Kansas Library.” However, Helen noted, the transfer of the materials would have to wait a few years, pending the settlement of Kenneth’s estate. 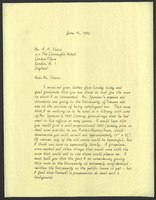 As early as December 1963, Helen expressed strong interest in creating an appropriately beautiful background for the new home of Kenneth’s papers and 18th-century office furnishings at the University of Kansas. In early 1964, Helen contacted several individuals for help locating and purchasing a period room, preferably English, for this purpose. However, as Helen noted in this letter, she had not yet informed KU about her plan.

The room Helen sought is now the memorial office in Spencer Research Library. “I went to Europe for three weeks in September [1964],” Helen wrote to a relative, “and during my eight day visit in London located a very beautiful 18th Century pine panelled [sic] room, very similar to our present dining room as to color and quality.” 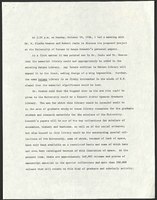 By Fall 1964, Kenneth’s estate had been settled and Sarah Lectman – formerly a secretary and librarian at the Midwest Research Institute – was processing his papers. Where on campus would the collection be housed?

Despite a recent two-year renovation and expansion, Watson Library was considered unsuitable due to lack of space. However, Wescoe and Jenks were prepared to offer Helen a solution: a donation of $2 million would fund a new 100,000-square-foot “Kenneth Aldred Spencer Graduate Library.” By the end of the meeting, Helen gave a verbal commitment for this new building. 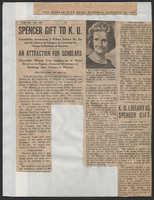 The Foundation’s gift for a new library building at KU was widely covered and praised in numerous local and regional newspapers.

Chancellor Wescoe considered the Foundation’s gift of $2.125 million for Spencer Research Library to be “the most important thing that has ever happened at KU.” Consequently, he did not want the announcement of the donation to be unceremoniously revealed when he spoke at a Kansas legislative budget hearing on January 26, 1966. Wescoe planned to seek permission to remove the temporary structures behind Strong Hall and clear the site for the new library. He could say he had $2 million pledged toward the building, but the press would inquire about the source of the funds.

Robert Ellsworth Jenks (1904-1981) of the prominent Kansas City architectural firm Tanner & Linscott & Associates designed Spencer Research Library and oversaw its construction. As the Spencer Foundation’s architect, he designed many of its other significant building projects, including KU’s Helen Foresman Spencer Museum of Art. Although the firm had designed and built the Linda Hall Library, Spencer Research Library was Jenks’s first library project.

Like Kenneth Spencer, Robert Jenks was a 1926 KU graduate. In the late 1950s, he assisted Kenneth in designing the Spencers’ 24,000-square-foot Georgian-style residence at 2900 Verona Road in Mission Hills, Kansas. The home is pictured in the timeline. 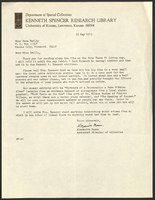 However, Helen’s participation was not always welcomed by members of the all-male Library Building Committee. Among themselves, they bemoaned Helen’s inexperience with the operations of academic libraries. Moreover, gaining space was their chief goal, and they worried that Helen’s expensive 18th-century aesthetic would exhaust a sizeable portion of the available funds and result in a smaller building.