A "Darling Little Girl" and a Young Engineer: The Spencers' Early Lives

Kenneth and Helen Spencer were deeply shaped by growing up in the coal-mining region of southeastern Kansas and southwestern Missouri. Both were grandchildren of Kansas pioneers who settled in the state in the decade following the Civil War. Both called the area home for the first 38 years of their lives.

The oldest of six children, Helen Elizabeth Foresman was born in Joplin, Missouri, on November 8, 1902, to parents Frank Wade Foresman (1865-1954) and Frances Alice “Fannie” Foster (1877-1962). Helen moved several times as a young girl: first to Chanute, Kansas; next to Amarillo, Texas; and finally, in 1917, to Pittsburg. There her father opened and managed a lumberyard for Long Bell Lumber Company.

Kenneth and Helen were also greatly influenced by attending the University of Kansas. Following in his father’s footsteps, Kenneth enrolled at KU in 1920 and graduated in 1926 with a B.A. in geology. Helen graduated from high school in 1922 and spent much of the fall attending to her mother, who was unwell. Helen attended KU for three spring semesters in 1923, 1924, and 1925. Her coursework included home economics classes on decoration and architecture.

Jennie Purdy Lapham, who lived across the street from the Foresman family in Chanute, wrote to Helen in 1962, recalling that she was “such a darling little girl.” “A friend of mine would get another baby and we would take you two babies and walk for blocks and blocks,” she remembered. “I think your mother trusted me for she never seemed to worry about us." 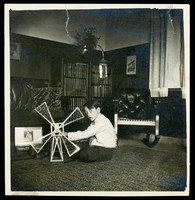 As shown in this photograph – with “the beginnings of an engineer” written on the back – Kenneth showed an early mechanical aptitude. According to one article, as a youth he "built a model steam shovel to scale and operated it with an electric motor. The Christmas he first heard of yule logs he took it on himself and his pony to get a huge log into the house and into the fireplace. It was an operation of building inclines and using jacks along with the pony’s pulling power. While he was solving the problem of getting the log into the fireplace the pony foraged in the sunroom on his mother’s plants, which was an unfortunate ending."

Kenneth’s lifelong love of sports began during his childhood. As a student at Pittsburg Normal High School (1916-1920), he excelled at football, basketball, and track. According to various biographical articles about Kenneth, a displaced vertebrae caused by a high school football injury ended his plan to play in college. Nonetheless, at KU Kenneth became a fan of the university’s football team. He also took up boxing – suffering two broken noses – and was a two-time heavyweight champion.

Kenneth’s adoration of and devotion to his parents is evident in many of the letters he wrote to them over the course of his adult life. For example, in another January 1923 letter, Kenneth told his parents:

"When I do think of the past I am reminded how unusually fortunate I have been, to be of such parentage is the first advantage you gave me…and to have spent that vigorous young life in a family so harmonious, so honorably upright and good, is a thing that goes to inlay qualities that are not taught anywhere else."

When Kenneth wrote the letter shown here, he had completed two years at the University of Kansas and was enrolled at Cornell University – attending classes for one semester before returning to KU. In explaining the Cornell entrance exams to his parents, Kenneth expressed his opinion that the higher requirements for non-New Yorkers were “another attempt to keep the savage westerner down.” This comment hints at Kenneth’s pride in the Midwest, a sentiment that guided much of his business career as well as his and Helen’s philanthropic efforts.

Kenneth’s membership in the Alpha Nu chapter of Beta Theta Pi was a significant aspect of his time at KU. His freshman roommate was senior and fraternity brother Deane W. Malott, who later served as the Chancellor of KU (1939-1951). Years later, Kenneth counted himself among Malott’s “old friends who know him best.” As a senior, Kenneth served as chapter president.

The fraternity remained important to Kenneth throughout the rest of his life. A remembrance of him in The 1960 Alpha Nu noted that:

Only two months earlier Mr. Spencer had been named Kansas City’s “Beta of the Year.”

In 1954, his $50,000 gift enabled Alpha Nu to landscape its property, construct the circle drive, renovate the porch, and build the patio. As mentioned in the Treasurer’s report, the recent acquisition of the adjacent property to the north was largely possible through his cooperation. Undoubtedly few other Alpha Nu Betas have shown as much love for the chapter. 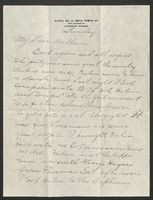 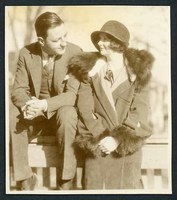 Bottom: Photograph, Kenneth and Helen around the time they got married, undated [circa 1920s]

Kenneth and Helen met as high school students in Pittsburg, Kansas. Several articles about Kenneth describe how they first crossed paths; the stories are similar, although they differ on some of the specific details. For example, according to a June 1960 article in KU’s Alumni Magazine,

Kenneth remembered how the Pittsburg high girls always showed up to watch [football practice]. At one practice session which was especially rough there was a new freshman girl watching. The new girl’s name was Helen Foresman, and she didn’t seem to mind at all that following practice Kenneth’s face was dirty and scratched, his jersey spattered and torn from the rough and tumble practice. Kenneth rode home from the practice in Helen Foresman’s motor car. Before Kenneth got out of the car he had arranged a date with the vivacious, auburn-haired Helen.

Kenneth and Helen continued dating even after he left Pittsburg for the University of Kansas. In the letter shown here, written one month into his freshman year at KU, Kenneth describes one of Helen’s visits to Lawrence. The pair spent some time in Kansas City and enjoyed a party, a “picture show,” and meals out.

“I Like to Make Things Work”: Kenneth Spencer, Engineer and Businessman →