“I Love You to Death”: Kenneth’s and Helen’s Later Lives

Kenneth and Helen were devoted to each other throughout their more than 40 years together. They enjoyed a variety of hobbies as a couple, including traveling throughout the United States and abroad and designing and decorating their homes. They also each had their own interests: Kenneth loved football, fishing, and flying, while Helen cultivated a knowledgeable love of decorative arts, antiques, and horticulture.

On February 19, 1960, Kenneth died from a heart attack complicated by the flu and pneumonia. He was 58 years old, vacationing on a yacht cruise with Helen and friends. Obituaries and memorials for Kenneth praised his ability to “dream big” and his quick rise to national success as an industrial leader. As the Joplin Globe noted, “Kenneth Spencer’s ingenuity and his enormous energy eventually made him a major benefactor to the economy of the entire Midwest. The fruits of his genius will serve this region and the country for countless years to come.”

Helen lived another 22 years and never remarried. She continued to enjoy a full life of traveling, entertaining, decorating her home, collecting art, and leading the Spencer Foundation’s many philanthropic efforts.

Helen died on February 15, 1982. An obituary published in the Kansas City Times the next day commented that “Mrs. Spencer’s death ends an era of philanthropy that cultural and political leaders in Kansas City, as well as in the two-state area, call enlightened and profound. More than a dispenser of large sums to worthy causes, Mrs. Spencer helped chart a course of several of Missouri’s and Kansas’s greatest institutions.”

An avid fisherman, Kenneth took fishing trips three to four times a year. For example, after joining the elite Moisie Salmon Club in 1957, he took annual trips Quebec’s Moisie River to fish for Atlantic salmon. The picture from The Independent and other photographs in Kenneth’s papers show that Helen went on at least some of these fishing trips. She may have enjoyed them or she may have, in Kenneth’s words, been a “good sport” about accompanying him.

In addition to Kenneth’s travel for work, he and Helen enjoyed traveling for pleasure throughout the United States and Europe and elsewhere around the world. 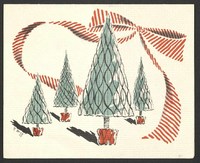 Kenneth wrote in this card that “in keeping with our promises this Christmas, no additional presents, just a posy so you may know I love you to death and you have made all my Christmases so happy.”

Kenneth’s and Helen’s papers at Spencer Research Library contain few personal notes or letters between them. However, their love for each other is evident in other materials in the collections. For example, shortly after Kenneth’s death, Helen described her husband as “the most patient man in the world. In 33 years as Kenneth’s wife, I never knew him to become ill-tempered or impatient. Kenneth was exacting of those around him, but he always inspired others to action. He never said ‘I’ – he always said ‘we.’” 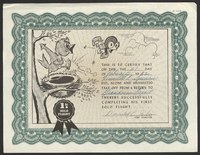 Kenneth’s frequent travel around the country for business stimulated his interest in flying. After Spencer Chemical acquired its own plane, Kenneth used it for most of his air travel and the company pilot taught him how to fly.

Kenneth received his pilot’s license in October 1952. Over the next seven years, he frequently flew himself and Helen to and from their domestic vacation destinations. During the same time period, Kenneth accumulated more than 800 solo flight hours. He would reportedly fly for as long as three or four hours at a time.

Kenneth had a lifelong love of football, especially the University of Kansas football team. His well-known devotion to the Jayhawks was the theme of several company advertisements in KU souvenir football programs throughout the 1950s. Additionally, his appointment books include notes about games he attended, and his papers contain season ticket orders and stadium parking permits. 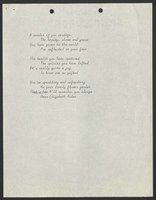 Helen spent several holidays and vacations at Maine Chance health and beauty spa in Phoenix, Arizona. It was one of several exclusive, luxurious resorts started by international beauty magnate and innovator Elizabeth Arden in Maine in 1934. The first destination spa of its kind in the United States, Maine Chance catered to illustrious and wealthy women from all over the world, including actress Judy Garland and First Lady Mamie Eisenhower. Helen was so charmed and invigorated by her visits to Maine Chance that she developed a close and personal friendship with Arden (1881-1966). 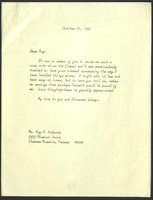 As shown in this letter, Helen’s correspondence with relatives and friends sometimes indicated how difficult she found life without Kenneth. In an October 1961 letter to her brother-in-law Galen Spencer, Helen wrote “I am feeling a little better and stronger and I am carrying on, as I know Kenneth would expect me to do, in the best way I know how.”

The chapel Helen referenced in this letter is the Kenneth Spencer Memorial Chapel at the University of Kansas Medical Center, constructed and opened in 1964-1965. 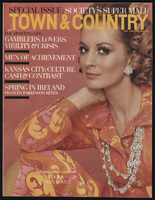 Article, “Living with Art and Antiques,” Town and Country, May 1968

In late 1965, Helen sold her home at 2900 Verona Road. She moved in to the Walnuts, an exclusive condominium building near Country Club Plaza in Kansas City. Her 17-room, two-story apartment – which included three kitchens – was the subject of this magazine article.

Helen was consistent in her taste for elegant 18th-century furniture and decorative styles. This was reflected in her homes and in the architectural styles and period rooms of several building projects she funded. Many items on display in this article may have been donated during her lifetime and after her death to institutions including KU’s Helen Foresman Spencer Museum of Art and the Nelson-Atkins Museum of Art.

← The Spencers' Philanthropy in Kansas and Missouri
Anne Reilly, Confidential Secretary of Kenneth and Helen Spencer →