“An Example Others Could Emulate”: The Spencers’ Philanthropy

Throughout their lives, Kenneth and Helen generously gave their money, attention, and support. Kenneth lent funds to relatives, friends, colleagues, and employees. He also organized donations from other Spencer family members. As the president of P&M and Spencer Chemical, he arranged gifts benefitting the communities in which his companies operated. Helen privately supported a number of projects, hoping her actions would be “an example that others could emulate.” As a 1982 remembrance noted, “she felt that this example served as one of the highest purposes of giving.”

In 1949, Kenneth and Helen established the Spencer Foundation “to promote, inspire, foster, encourage, make possible, assist with and engage in” charitable, scientific, literary, educational, cultural, and religious causes. The Foundation’s projects – like those privately supported by the Spencers – aimed to raise the socio-cultural capital of the Midwest in the eyes of its residents and the rest of the country. In its 30 years of existence, the Kenneth A. and Helen F. Spencer Foundation gave over $18 million to organizations in the expansive Kansas City region.

The Foundation sought to bring to fruition ideas Kenneth and Helen envisioned before his death in 1960. Its implementation of those ideas changed over time. It began modestly in the 1950s, typically granting small gifts for general operating expenses. Helen became the Foundation’s president in 1960; during the next decade, projects were often memorials in Kenneth’s honor that focused on scientific endeavors. By the 1970s, the Foundation funded projects that reflected Helen’s love for the arts. 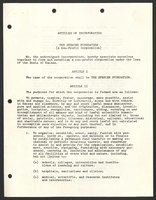 Articles of incorporation for the Spencer Foundation, August 10, 1949

In 1961, Helen and the board of directors changed the organization’s name to the Kenneth A. and Helen F. Spencer Foundation in order to differentiate it from similarly-named charitable foundations. 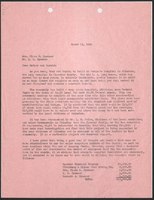 Kenneth’s parents taught him to practice humble philanthropy beginning when he was young. The Spencer family frequently did not announce their gifts, instead donating behind the scenes. 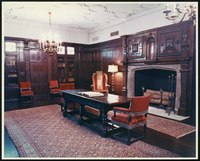 While the funds for the Quayle Bible Room were committed before Kenneth’s death, the project turned into one of the Foundation’s first major undertakings after his passing and became one of many memorials in his honor.

Helen frequently provided wall paneling and other decorative details for major projects in which she was involved. Her tastes typically ran to 18th-century England and the Georgian era. In contrast, the Quayle Bible Room reflects an older Jacobean style; the 17th-century paneling came from Urishay Castle on the Welsh-English border.

Kenneth and Helen both paid great attention to detail in whatever project they undertook. After 1960, Helen was actively involved in every significant building project for which the Foundation provided funds. She oversaw a wide variety of features in each building, taking part in activities ranging from making architectural decisions to picking interior colors and minor decorative elements. 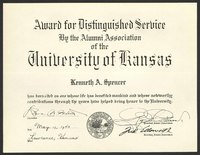 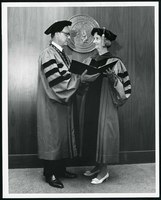 The Distinguished Service Citation is the highest honor given by the University of Kansas and the KU Alumni Association. Since 1941, it has been presented to men and women who have made “significant contributions to humanity.”

Kenneth and Helen were the first couple to receive the citation. Kenneth received the award for his “remarkable ability to organize and translate dreams into reality in the field of industrial development [and] for his ability to use the results of chemical research in effective war production and for improved standards of living in peace.” Helen was honored for her philanthropic efforts on behalf of KU and the Kansas City region.

Kenneth and Helen both received many other awards and honors for their business and philanthropic efforts. 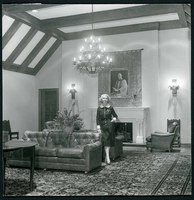 Helen personally oversaw the decoration of the Jewell Room, for which the Foundation donated funds in 1973. The room was named after Earle B. Jewell, the rector of St. Andrew’s for over 26 years. As one of Helen’s long-time and much-beloved friends, Jewell gave the eulogy at Kenneth’s funeral in 1960 and spoke at the Spencer Research Library dedication ceremony in 1968.