"The Colonization of This Land"

In outright defiance of his original instructions Cortés had set out to “settle,” and it was clear that from the moment of departure he was, and intended to remain, on his own. He was perhaps the only one among the conquistadors to recognize that the potential wealth of America depended upon planned exploitation of all her resources. He had seen for himself the ruin of the Antilles in the rush for quick returns, and he was not prepared to watch this dismal example repeated in Mexico. He had come not only to conquer but to settle and to “people,” to create a thriving new Spanish community over which he could rule…Cortés’s New Spain in the West was to be no haven for the gold-greedy, the men who had hoped to make a quick killing out of gold, silver, and slaves, and then return home to Spain, to live the kind of lives which the conditions of their birth had denied them. Cortés established what was the first true European settlement in the New World which would, in time, develop its own political culture and its own independent identity. 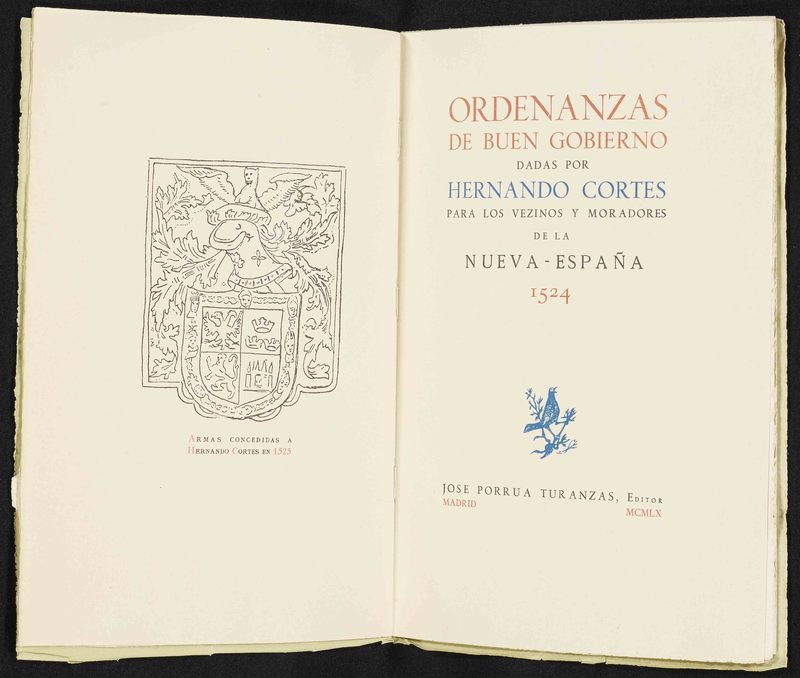 The Ordenanzas were the first written code of laws in New Spain. Cortés issued them in response to an influx of Spanish immigrants establishing new settlements across Mexico. For example, the Ordenanzas ordered all married men to send for their wives – and all single men to marry – within eighteen months. The state assisted anyone lacking funds to do so. Cortés described the Ordenanzas in his fourth letter to Emperor Charles V, dated October 15, 1524. “It is my duty,” he wrote, “to make the best arrangements I am able for the colonization of this land, and so that the natives and the Spanish settlers may maintain themselves and prosper, and Our Holy Catholic Faith take root.” 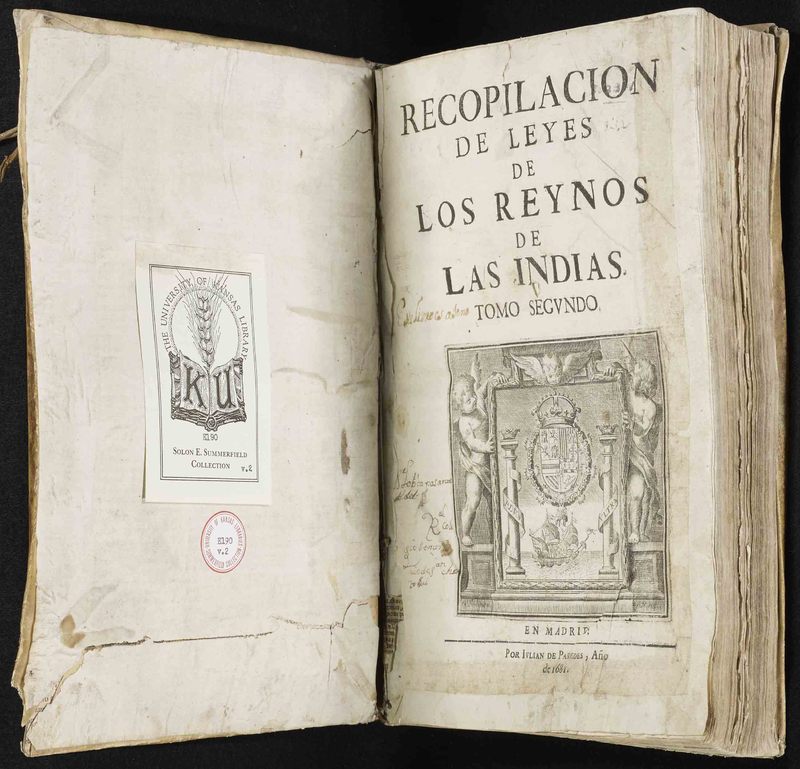 The Laws of the Indies contain the entire body of law that governed the Spanish colonies. The legislation controlled the colonization campaign in the Americas and adapted Castilian administrative and judicial institutions to the colonies’ governmental needs.

Bartolomé de las Casas and others demonstrated that the earliest laws (1512) did not protect native peoples against the excesses and cruelties of Spanish landholders who had virtually unrestricted access to their labor and resources. The resulting New Laws (1542) abolished this encomienda system and Indian slavery. They were later weakened, reissued, and amended.

The 1681 Recopilación is considered the classic compilation of the Laws. It contains 6,377 laws organized into nine topics such as the Catholic Church, governments and courts, political and military administration, discoveries and colonization, penal law, public finance, and navigation and commerce. While imperfect, the Recopilación was the most comprehensive law code ever instituted for a colonial empire, and it set forth humane – though often ignored – principles for the treatment of indigenous peoples.

Eight months after the fall of Tenochtitlan on August 13, 1521, Pope Adrian VI approved Cortés’s petition to send missionaries to the newly-conquered territories. Twelve Franciscans arrived first, in 1524. Members of various religious orders and the secular clergy followed. They undertook, in the words of Viviana Díaz Balsera, the “most arduous task of reshaping an alien, frightening, yet profoundly devout and extraordinarily disciplined culture, in order to make it fit into the universal and ecumenical world of Christianity.” The missionaries compiled a vast archive on the natives’ religious life, hoping it would help them eliminate old beliefs. The Franciscans took a leading role in this effort and were unsurpassed in appreciating language as crucial to understanding the natives’ culture.

Printing was viewed as a tool to aid missionaries in their efforts. The first printing press in the Americas was established in Mexico City in 1539, and early printed works consisted primarily of instructional religious tracts and grammars and vocabularies of native languages. 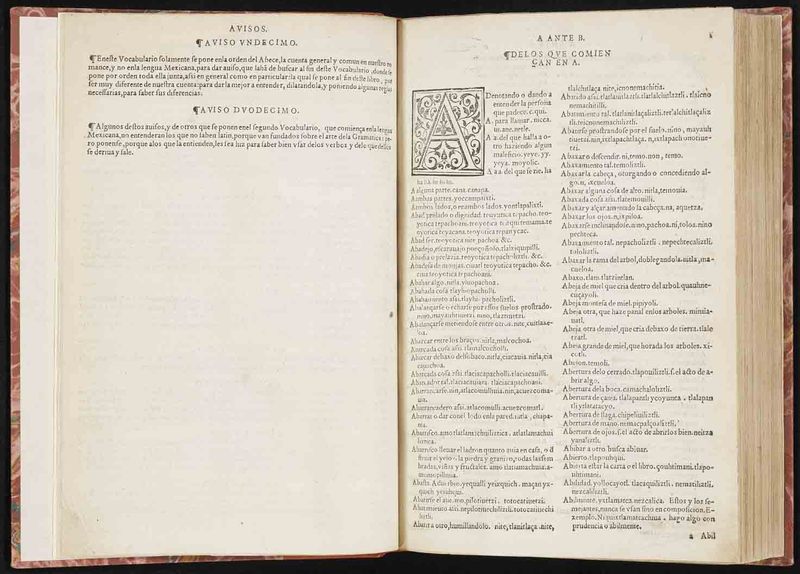 Friar Alonso de Molina (?-1579) became the Franciscans’ premier expert in Nahuatl, the lingua franca of the Aztec empire. The Vocabulario was the first dictionary printed in the Americas and Molina’s best-known work. It remains a key resource for modern scholars. Molina compiled the Vocabulario with indigenous collaborators, first converting Nahuatl into a Roman alphabetic script. First published in 1555 with a Spanish-to-Nahuatl vocabulary, the 1571 edition was revised and expanded to also include a Nahuatl-to-Spanish vocabulary.

The Vocabulario was crucial for friars’ evangelization efforts, helping them convey complex Christian ideas in the Mexicas’ own language. As historian John Schwaller writes, the missionaries found a “complex linguistic environment” in Mexico. They chose Nahuatl as the indigenous language to master. This approach also served Spanish colonial policy to make Nahuatl the single language of communication in Mexico, marginalizing all other spoken and written native languages. 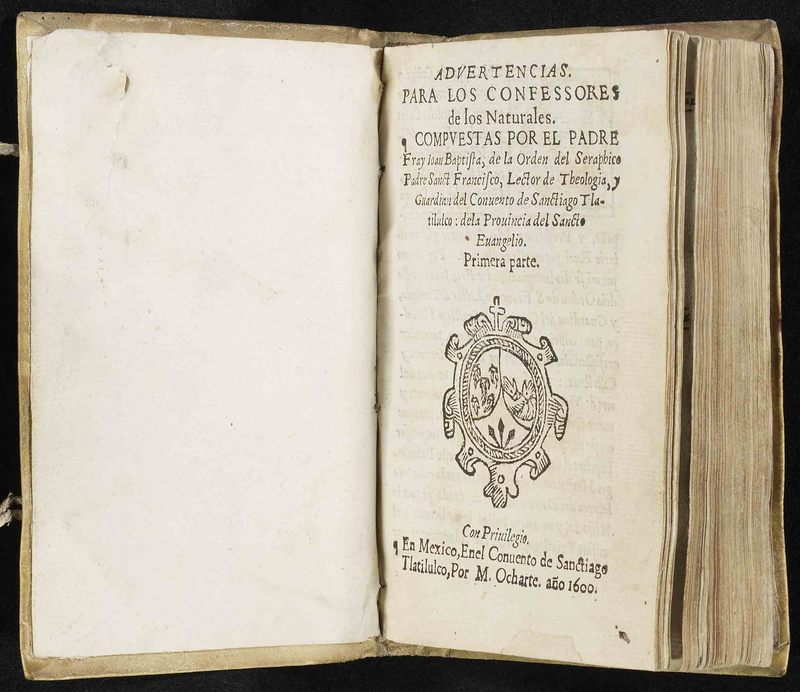 By the end of the sixteenth century, missionaries’ early optimism about the progress of Christianization was being tested. Friars observed the resilience of native religious practices and Mexicas’ apparently profound misunderstanding of the meaning and practice of the sacraments. For example, distressed confessors realized that many Mexicas went to receive the sacrament of penance without showing any feelings of guilt or remorse, an attitude that would invalidate the confession.

A staunch defender of administering confession to the Indians, Franciscan Juan Bautista (1555-circa 1613) wrote his Advertencias to respond to and offer advice about confessors’ complaints and concerns. Bautista sought to comfort the confessors’ conscience and urge them not to abandon the administration of the sacrament.