The texts shown here – those by Hernán Cortés, Bernal Díaz del Castillo, and Bernardino de Sahagún – constitute the three most emblematic firsthand accounts of the conquest of Mexico. Written in hindsight, these works are complicated narratives deeply rooted in the various contexts in which they were written.

Moreover, scholar Rolena Adorno has written that Díaz – along with Cortés – understood that, “regarding the conquest of Mexico, there was a second war to be fought and won.” It took place halfway around the world at the Spanish royal court, and it “had to be engaged on the battlefield of the documentary record and especially in historical accounts of those events. The challenge was to bring alive those forever absent deeds…in hand-to-hand combat with those works that constituted the ‘library’ of published works on the subject.” 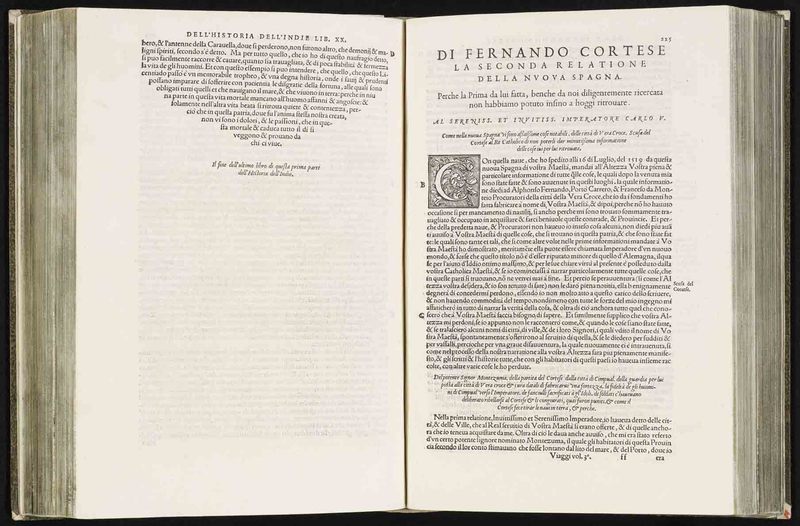 From 1519 to 1526 Hernán Cortés wrote a series of five “Letters of Relation” (cartas de relación) to his emperor. In his second letter, Cortés relates the most noteworthy events from the route inland and the siege of Tenochtitlan.

Charles V was the only authority high enough to legitimate Cortés’s expedition to Mexico, undertaken in defiance of Diego Velázquez, the Governor of Cuba. With his letters, Cortés went over the heads of opponents and rivals who sought to prosecute him as a traitor. Recognizing the power of print, Cortés also sought to argue his case, via published versions of his letters, to the public and for posterity. Further printings in Spanish were forbidden by royal decree in 1527. 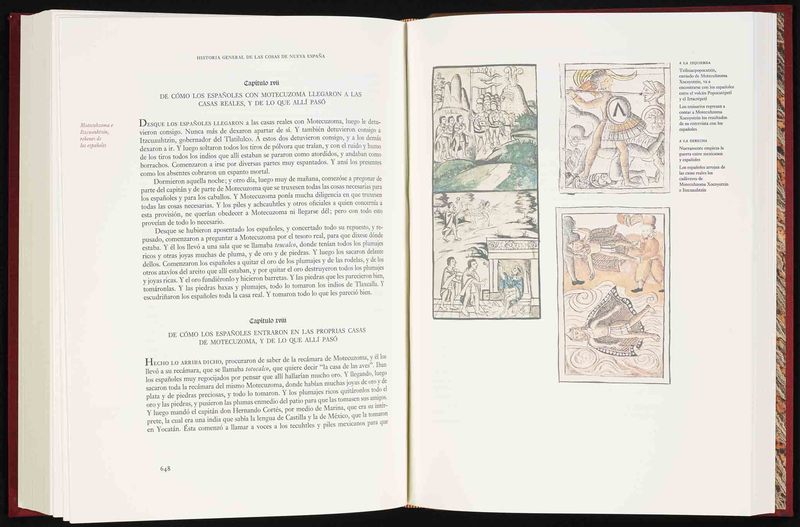 Franciscan friar Bernardino de Sahagún (1499-1590) dedicated his life to converting indigenous populations to Christianity. Closely tied with this missionary work were his efforts to recover ancient knowledge and provide a richly illustrated historical account of the Nahuas.

From about 1553 to 1555, Sahagún interviewed “prominent [native] elders” who were witnesses to Cortés’s conquest. Thus he compiled a chronicle of the event told from the indigenous point of view in their native language, Nahuatl. Political struggles of the time later motivated Sahagún to revise this account, adding passages praising the Spanish, especially Hernán Cortés. The story of the conquest forms Book 12 of the Florentine Codex, a mestizo text profusely illustrated by native painter-writers under Sahagún’s supervision. The codex is held by the Laurentian Library in Florence, Italy. It is the most famous surviving manuscript version of the published Historia general. 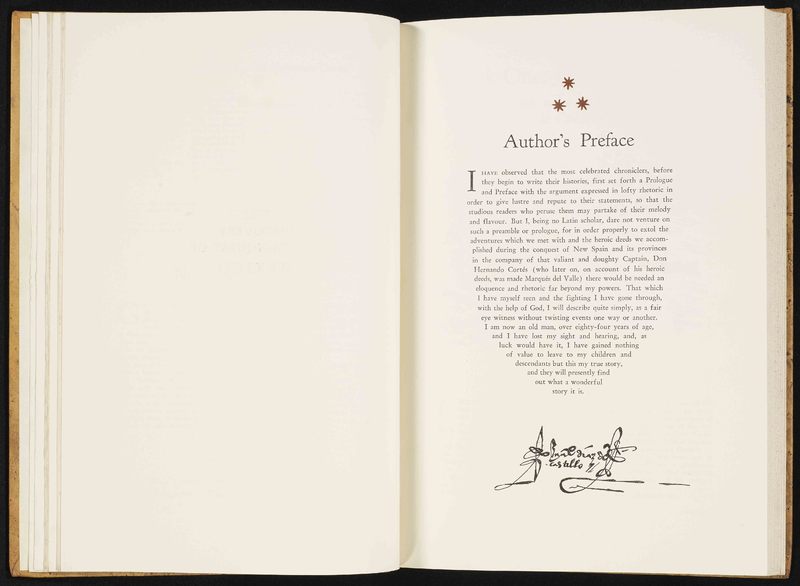 Bernal Díaz del Castillo (circa 1495-1584) was a foot soldier in Cortés’s army during the conquest of Mexico. He began writing the Historia verdadera in the 1550s, revising the text throughout the rest of his life.

Díaz framed his Historia verdadera as an authoritative and neutral historical narration. “We shall tell what we as eyewitnesses found to be true in those times,” he wrote. However, Díaz had a strong personal agenda for writing his book. New legislation (especially the New Laws of 1542) threatened the privilege and economic future of common conquistadors like himself. Additionally, Cortés’s published letters and Francisco López de Gómara’s history threatened their prestige by attributing the success of the conquest exclusively to Cortés himself. Scornful of Gómara’s work, Díaz wrote the Historia verdadera to correct the historical record and return some of the “honor and glory” credited to Cortés to “our valiant captains and strong soldiers.”

← "As Far as This the Ships of Ferdinand, King of Spain, Have Come"
"Foul Murders and Other Barbarities" or the "Actions of [a] Hero" →