During the early modern era and throughout the eighteenth century, English underwent a process of regularization. Dictionaries, grammars, and printing conventions all played a role in codifying the language, setting out and sanctioning its vocabulary, spelling, grammar, and even pronunciation. One result was the emergence of something now called “Standard English,” a rather prickly and elusive term for the variety of the language deemed most acceptable within a country or other linguistic area. 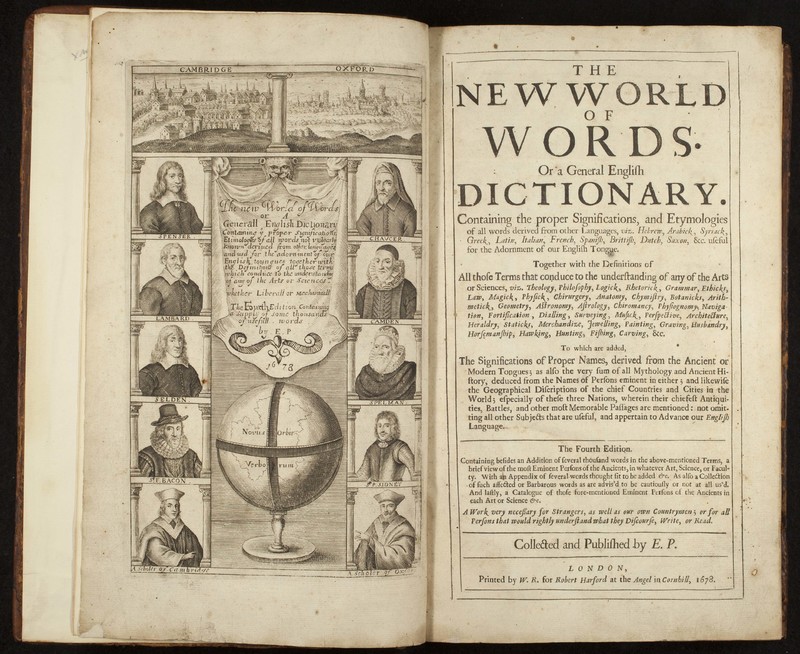 English dictionaries emerged in the seventeenth century not as comprehensive inventories of all of the words in the language, but rather as lists of difficult words. These volumes sought to assist readers with the abundance of new words entering into the language. Many of these dictionaries drew heavily on works that preceded them. Robert Cawdrey’s A Table Alphabeticall (1604) is arguably the first monolingual English dictionary, yet it drew on and absorbed a similar, though much smaller, table of English words from Edmund Coote’s The English Schoole-Maister (1596). Edward Phillips’s The New World of Words, shown here in its fourth edition of 1678, borrowed extensively from Thomas Blount’s Glossographia (1656), the largest monolingual English dictionary at that time. Phillips did, however, bring about two significant developments: his was the first folio (large format) monolingual English dictionary, and he used an obelisk (t) to mark words that he wished to deprecate for being forced, spurious, or ill-derived. Among the words that Phillips deemed unworthy are some that are still in use today, such as arsenic and allocation. In an additional collection of “affected” words at the back of the volume, we find bibliography, inimical, and repatriation. 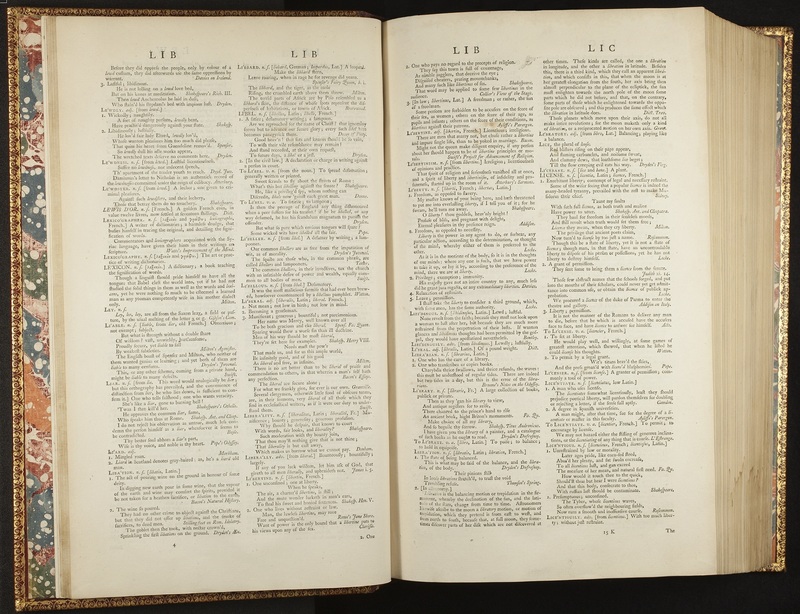 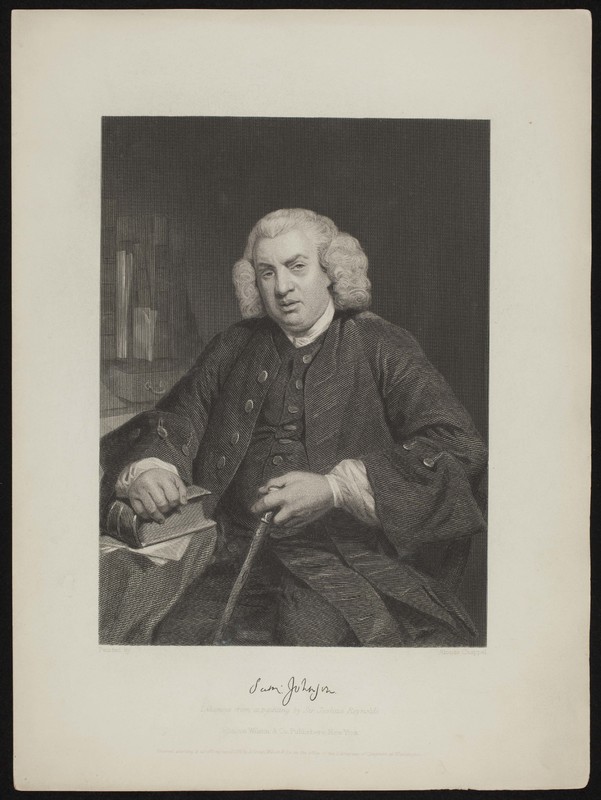 The over 40,000 entries of Samuel Johnson’s A Dictionary of the English Language (1755) have earned him a permanent place in English’s history. Johnson’s Dictionary was not the first comprehensive approach to the language; Nathan Bailey’s An Universal Etymological English Dictionary (1721) had previously defined and provided etymologies for both easy and difficult words alike. However, Johnson added life and interest to his definitions by illustrating them with 114, 000 quotations “from the best writers,” as his full title proclaims. In sourcing his citations, Johnson drew heavily on Shakespeare, Spenser, Bacon, and other early modern writers. Although he had intended to “admit no testimony of living writers,” he made exceptions when their works elicited his veneration, when his memory offered up an example that was wanting, or when his “heart in the tenderness of friendship, solicited admission for a favourite name.” Among the quotations that Johnson included for libertine is one taken from Samuel Richardson’s Clarissa, published only seven years earlier in 1748.

Johnson’s dictionary proved immensely popular, making him England’s best-known lexicographer, a word he defines in famously comic and self-deprecating terms: “A writer of dictionaries; a harmless drudge, that busies himself in tracing the original, and detailing the signification of words.”

2.   Samuel Johnson. A Dictionary of the English Language: in Which the Words Are Deduced from Their Originals, and Illustrated in Their Different Significations by Examples from the Best Writers. London: printed by W. Strahan, for J. and P. Knapton; T. and T. Longman; C. Hitch and L. Hawes; A. Millar; and R. and J. Dodsley, 1755. Call#: Clubb G1755.1 (v. 2 of 2 display) 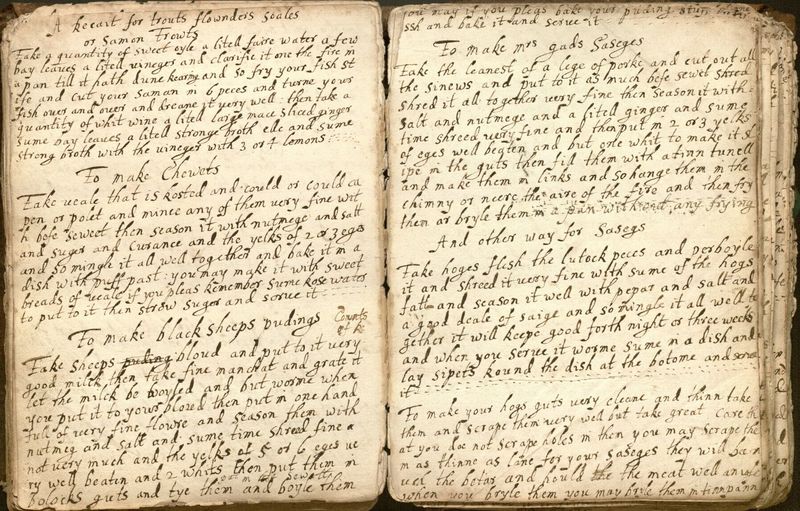 This manuscript volume contains over 700 medicinal and culinary recipes written out in a hand that proudly proclaims on the first page, “Elizabeth Dyke her Booke of Recaits 1668.” Genealogical evidence suggests that Dyke was from a well-to-do family rooted in East Sussex. Although spelling in print was becoming increasingly regularized throughout the late seventeenth and eighteenth centuries, ordinary handwritten documents still exhibited much variation. Even highly educated individuals might use phonetic spellings in informal letters and writings. In the recipes on display, for example, Dyke writes befe, yelks, could, worme, and curance for our modern beef, yolks, cold, warm, and currants, respectively. These spellings may offer some clues as to how Dyke spoke. However, the relationship between spelling and pronunciation is a complex one, especially at a time when it was not uncommon for writers to spell the same word differently from one sentence to the next. See, for example, Dyke’s samon and saman for our modern salmon. 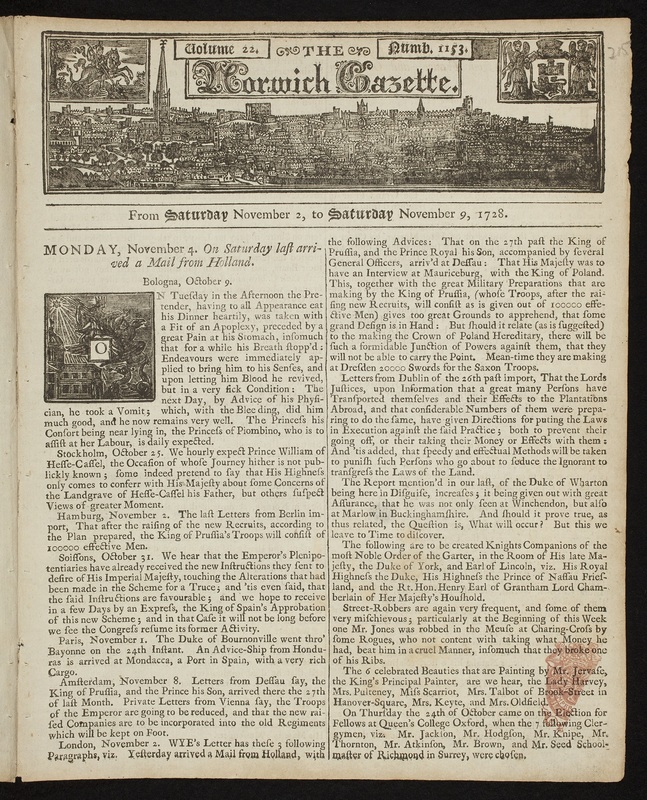 In Search of a Curious Fine Old Nogg?

The explosion of weekly and daily newspapers during the eighteenth century provided readers with not only international and local news and opinion, but also a flood of contemporary language (hot off the presses, to borrow an expression from the later era of mechanized printing). Accordingly, newspapers participated in the standardization of English that took place in the 1700s. London newspapers circulated in both the capital and beyond, and provincial newspapers, such as the Norwich Gazette, circulated news in their respective regions. Although regional dialects often shaped speech and pronunciation, the English of provincial newspapers generally followed the increasingly regularized form of standard written English. Nevertheless, these newspapers also provided an opportunity for the circulation of language from members of the public in the form of advertisements. The notices reproduced below for an alehouse and a lost horse are but two examples of the many ads found in the issue on display. 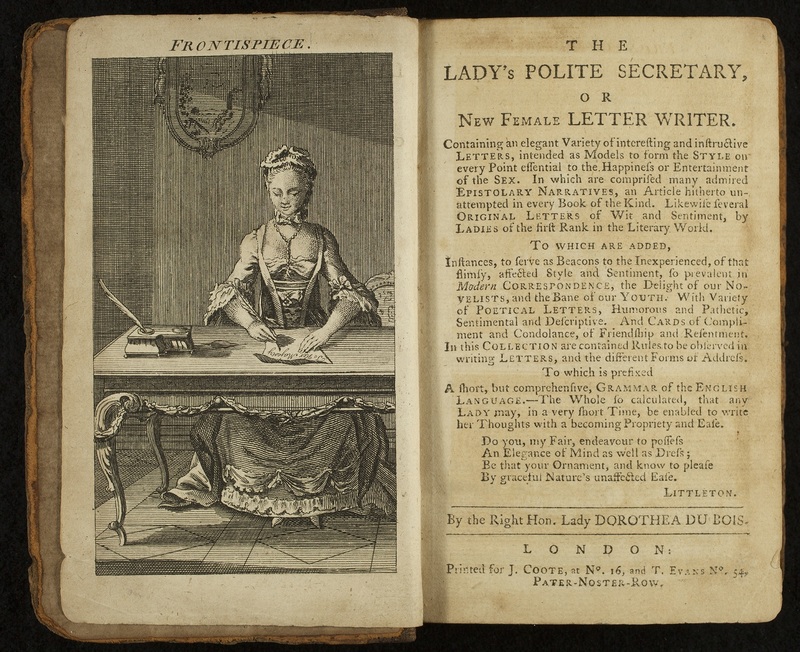 “…that any Lady may, in a very short Time, be enabled to write her Thoughts
with a becoming Propriety and Ease.”

Irish writer Dorothea Du Bois’s primary concern in The Lady’s Polite Secretary is offering models of letter writing for a female audience. However, she begins her volume with a brief seven-page grammar. English grammars became increasingly popular in the eighteenth century. As some scholars have suggested, the rise in grammars may follow from that era’s proliferation of manuals on conduct and writing etiquette. All of these appealed to a growing middle class interested in adopting the speech and habits of “polite society.” Indeed, the volume’s definition of grammar suggests a consonance with etiquette. “Grammar” Du Bois explains, “is the art of expressing our thoughts with propriety, and is divided into four parts, viz. Orthography, Etymology, Syntax, Prosody.”

The immensely popular grammars of Robert Lowth and Lindley Murray, first published in 1762 and 1795 respectively, appear in another section of this exhibition.

← Middle and Early Modern English: From Chaucer to Milton
Englishes →