In the preface to his Dictionary, Samuel Johnson writes, “sounds are too volatile and subtile for legal restraints; to enchain syllables, and to lash the wind, are equally the undertakings of pride, unwilling to measure its desires by its strengths.” Yet, the history of the language is full of all manner of attempts to govern English and specify what it should be.

Prescriptivism is the term used for approaches to language that set out rules for what is regarded as “good” or “correct” usage. Descriptivism is an evidence-based approach to language that describes, in an objective manner, how language is being used. Most contemporary academic linguists are descriptivists, but prescriptivist approaches abound in schools, style guides, internet comment threads, and parental chidings. This case examines attempts to govern, reform, and/or reimagine English. 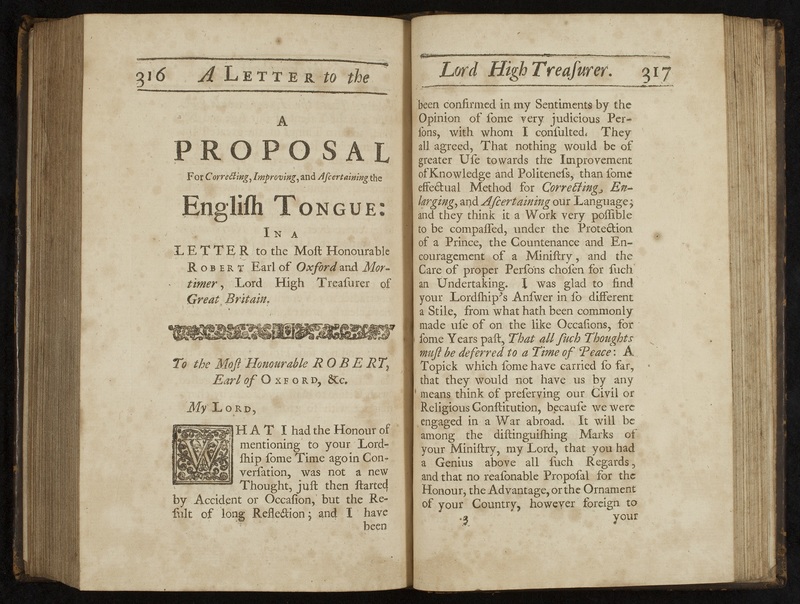 …some Method should be thought on for ascertaining and fixing our Language for ever, after such Alterations are made in it as shall be thought requisite. For I am of Opinion that it is better a Language should not be wholly perfect, than that it should be perpetually changing […]

How many times have you read a letter to the editor complaining that English is not what it once was? Change in the English language is something that has vexed many over the years. Jonathan Swift, author of Gulliver’s Travels, was among those who advocated for the formation of an Academy to regulate language and arrest it from further change. In 1712, Swift published “A Proposal for Correcting, Improving, and Ascertaining the English Tongue.” In it, he assesses the condition of the language and laments that English’s “daily Improvements are by no means in proportion to its daily Corruptions.” Accordingly, Swift proposes the creation of a Society to govern English and “fix it for ever, or at least till we are invaded and made a Conquest by some other State.” Yet, for all of the talk of Swift and others, no Academy came to pass. English is made and remade by its speakers every day. 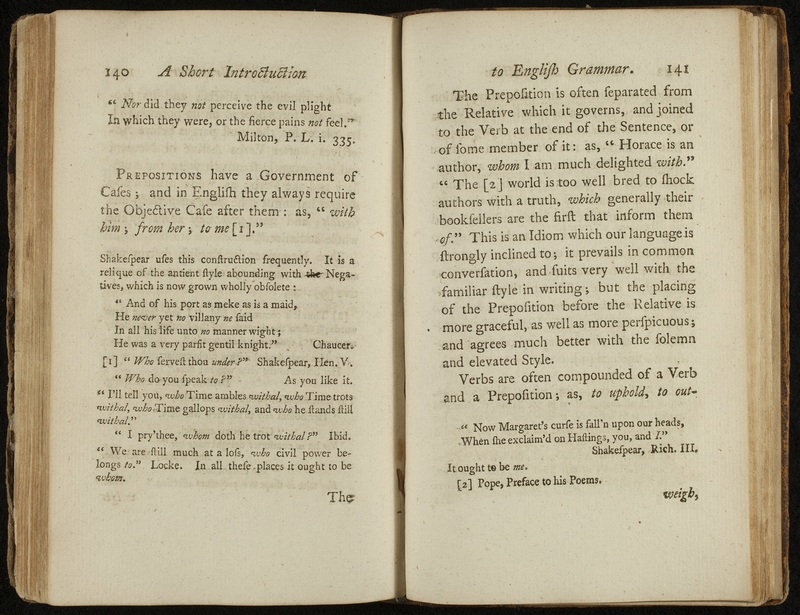 Robert Lowth was one of the most influential grammarians of the eighteenth century. He is often credited with spurring a zeal for prescriptivism, an approach to language that advocates for certain usages above others and sets out rules as to what is “correct.” In recent years, scholars have reassessed this reputation, showing that Lowth’s Grammar is more descriptive (and much less rule-bound) than many remember. His reputation as a prescriptivist stems instead from his use of examples from well-known writers to highlight “mistakes” in usage. In the passage on display, Lowth notes our language is strongly inclined toward separating prepositions from their relatives (whom, which, etc.). He asserts that while this prevails in common conversation and fits well in familiar writing, “the Placing of the Preposition before the Relative is more graceful, as well as more perspicuous; and agrees much better with the solemn and elevated Style.”  Lowth’s caution against preposition stranding, as it is now called, is mild at best. However, he illustrates it with an admittedly awkward passage from the poet Alexander Pope: “The World is too well bred to shock authors with a truth, which generally their booksellers are the first that inform them of” (emphasis Lowth’s).

A past owner of Spencer’s copy of Lowth was clearly someone who shared the grammarian’s passion for noting infelicities in the prose of others. This reader has crossed out the “the” before “Negatives” in the footnote on page 140 and makes similar manuscript corrections throughout.

2.   Robert Lowth. A Short Introduction to English Grammar: with Critical Notes. Second Edition, Corrected. London: printed for A. Millar; and R. and J. Dodsley, 1763. Call #: B5107 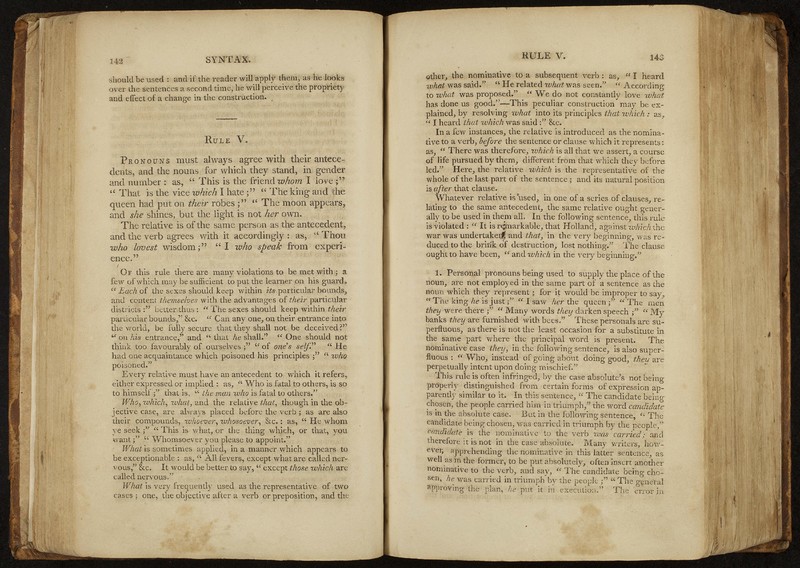 The Plight of Singular ‘They’

Have you ever asked a crowded room, “Did someone drop their pen?” If so, then you have used singular ‘they.’ Writers and speakers, well-known and not, have been using singular ‘they’ for centuries to cope with antecedents of indeterminate gender. However, over the course of the nineteenth century, grammars increasingly flagged this as an error to be corrected. One of the sources of this prohibition was Lindley Murray’s English Grammar, first published in 1795. Murray’s fifth rule of syntax is “Pronouns must always agree with their antecedents, and the nouns for which they stand in gender, number, and person.” In the 1810 edition on display, Murray warns against the “many violations” of this rule and corrects a use of singular ‘they’ by defaulting to a male pronoun. “Can any one, on their entrance into the world…” becomes “on his entrance.” A past owner of Spencer’s copy has learned Murray’s lesson and makes a similar “correction” in the volume’s practice exercises:

Widely reprinted, including in abridged and adapted editions, Murray’s Grammar helped to ban singular ‘they’ from many classrooms and style guides for nearly two centuries. Yet, as the rather ingenious title of a radio piece by Geoff Nunberg proclaims, “Everyone Uses Singular ‘They,’ Whether They Realize It or Not.”

3.  Lindley Murray. An English Grammar: Comprehending the Principles and Rules of the Language, Illustrated by Appropriate Exercises, and a Key to the Exercises. New York: Collins and Perkins, 1810. Call #: C11494 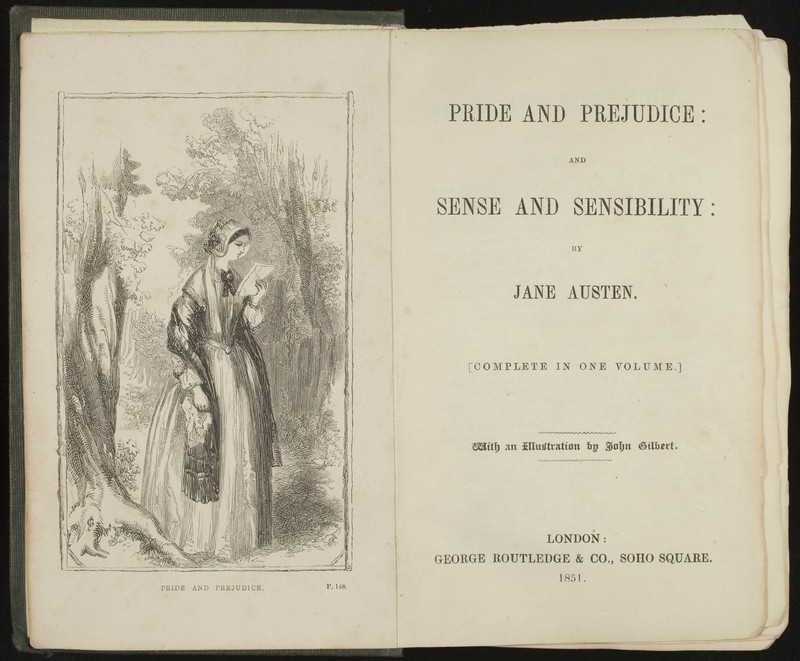 Singular ‘they’ appears with such regularity in the writings of Jane Austen that a website devoted to the author, Pemberley.com, offers a detailed list of its use throughout Austen’s works. Toward the end of Pride and Prejudice, for example, Elizabeth exclaims to Darcy, “To be sure you know no actual good of me – but nobody thinks of that when they fall in love” (emphasis added). 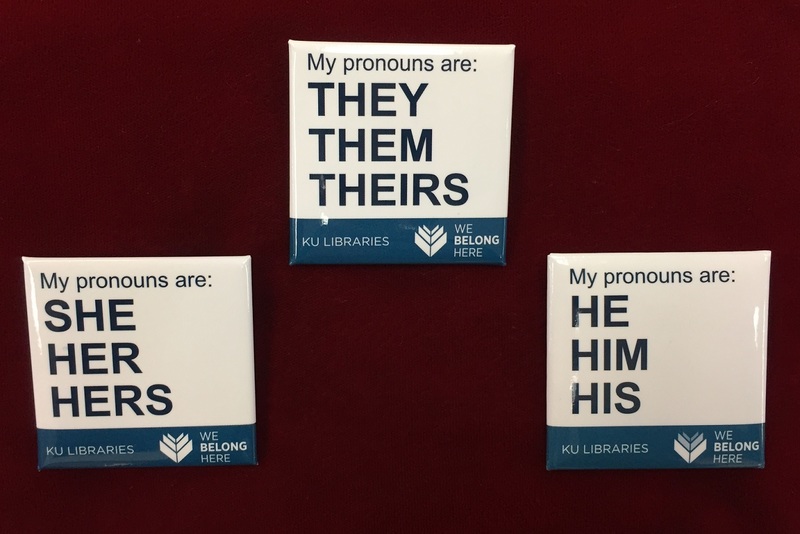 The Return of Singular ‘They’

In January of 2016, the American Dialect Society voted to make singular ‘they’ its word of the year for 2015. The selection was prompted by the word’s emerging use as a pronoun “for someone who may identify as ‘non-binary’ in gender terms.” In March of 2017, the Associated Press (AP) added a discussion of ‘they/them/their’ as a singular pronoun to its stylebook. The inclusion recognized both the word’s use as generic pronoun in spoken language (as in the Jane Austen example above) and the need for a pronoun for individuals who identify as neither ‘he’ nor ‘she.’ Scholar Anne Curzan has adopted the term “politically responsive prescriptivism” for rules or judgements that promote inclusive, nondiscriminatory, and/or politically expedient usage.

As part of its 2016 “You Belong Here” campaign, KU Libraries created pronoun pins that enable their wearers to specify their preferred pronouns: He/Him/His, She/Her/Hers, or They/Them/Theirs. The pins recognize that pronouns are an important part of identity and seek to foster an inclusive and welcoming environment within the libraries. 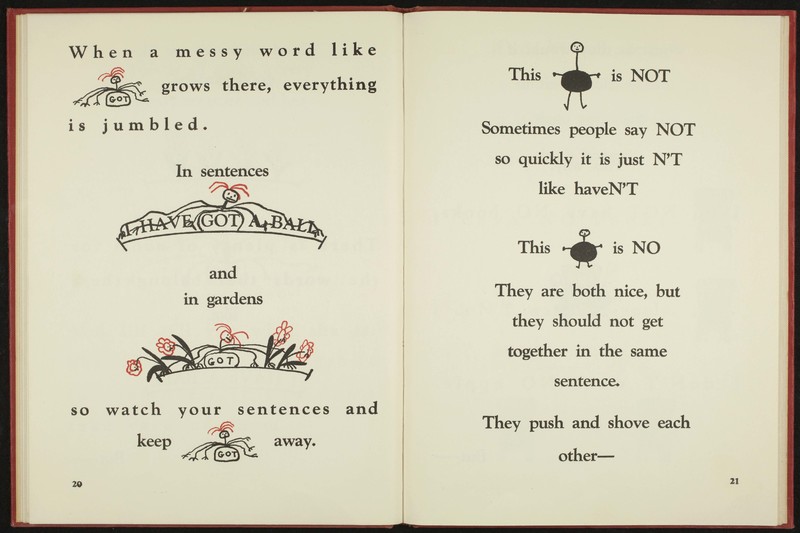 Grammar Can Be Fun?

Munro Leaf is best-remembered for The Story of Ferdinand (1936), his children’s book about a flower-loving bull. Before he wrote that volume, however, Leaf authored Grammar Can Be Fun (1934), an early installment in his X Can Be Fun series. The book pairs a prescriptive approach to grammar with Leaf’s own comically crude illustrations, but how much fun can a scolding be? Leaf warns against double-negatives, adding ‘got’ to sentences, using the words ‘yeah’ and ‘gimme,’ and confusing ‘lie’ and ‘lay.’ The book even includes blank pages at the back for children to list out their mistakes. 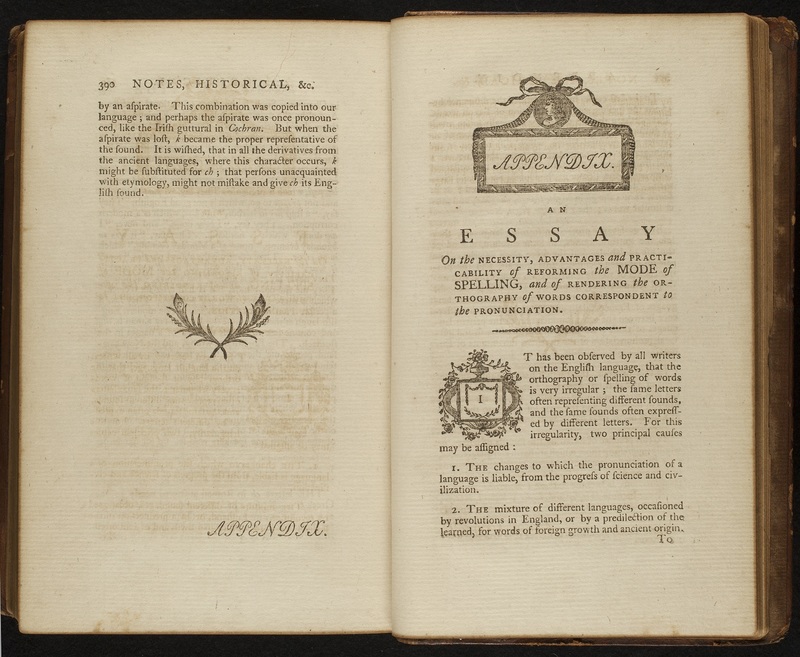 The relationship between the pronunciation of English and its system of spelling (or orthography) is inconsistent at best. Cough and through or great and meat appear as though they should rhyme, but do not. Other words are spelled identically, but are pronounced differently according to their meaning, for example, “bow and arrow” vs. “Congratulations! Take a bow.”

Within the American context, Noah Webster is the figure best known for tackling spelling reform. At the end of his Dissertations on the English Language (1789), he appends an essay on the topic. There, he appeals to national pride by asking:

…ought the Americans to retain these faults [in English spelling] which produce innumerable inconveniencies in the acquisition and use of the language, or ought they at once to reform these abuses, and introduce order and regularity into the orthography of the AMERICAN TONGUE?

Webster continues by proposing a series of relatively radical alterations. These include, for example, the omission of all superfluous or silent letters (changing bread to bred, give to giv, built to bilt, and so on) and the replacement of characters with vague or indeterminate sounds by characters with more clearly-defined ones (changing laugh to laf and key to kee). Although Webster did not ultimately adopt all of these proposals in his subsequent grammars and dictionaries, he helped to establish several. Americans now write of the defense of honor; whereas for the British, or even our Canadian neighbors (to them, neighbours!), it remains the defence of honour.

7.    Noah Webster. Dissertations on the English Language: with Notes, Historical and Critical, to Which Is Added, by Way of Appendix, an Essay on a Reformed Mode of Spelling, with Dr. Franklin’s Arguments on That Subject. Boston: Isaiah Thomas and Company, 1789. Call #: C1514 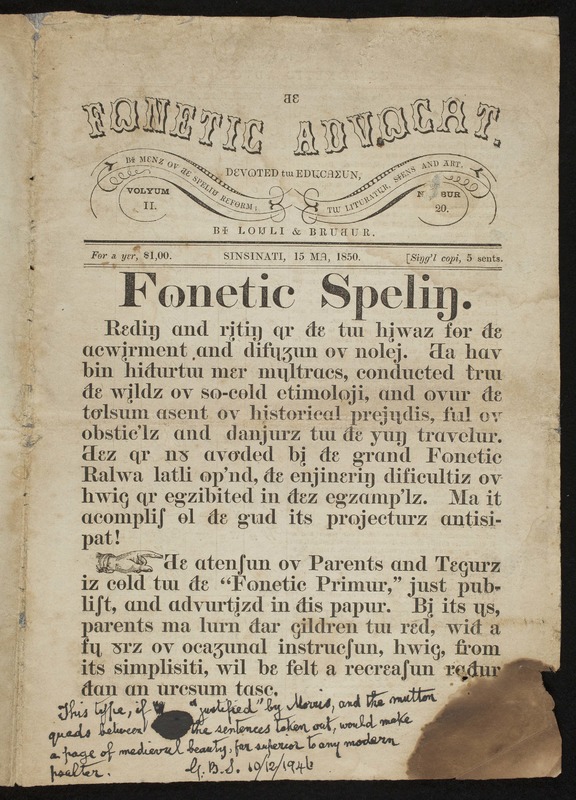 The Fonetic Advocat adopts an even more radical approach to spelling reform than Noah Webster. Published in “Sinsinati” (Cincinnati) in the mid-nineteenth century, the periodical announces in the phonetic spelling of its banner that it is “devoted to education by means of the spelling reform to literature, science and art.” Its publisher, E. Longley, was the director of the American Phonetic Society. Longley’s phonetic alphabet predates and differs from the International Phonetic Alphabet now used by linguists to specify the sounds of spoken language

The issue on display once passed through the hands of playwright George Bernard Shaw, a figure also interested in spelling reform. Interestingly, Shaw’s manuscript notation on the front page does not address the issue of phonetic spelling itself, but rather the type used for it. He writes, “This type, if ‘justified’ by [William] Morris, and the mutton quads [large spacing type] between the sentences taken out, would make a page of medieval beauty, far superior to any modern psalter.”