English is an umbrella term. It encompasses a number of national, regional, and social varieties and dialects, each of which may have differences in vocabulary, grammar, pronunciation, and usage.  In this sense, it may be more accurate to speak of ‘Englishes’ than to speak simply of English. This case explores some of the varieties that contribute to the diversity and richness of English. 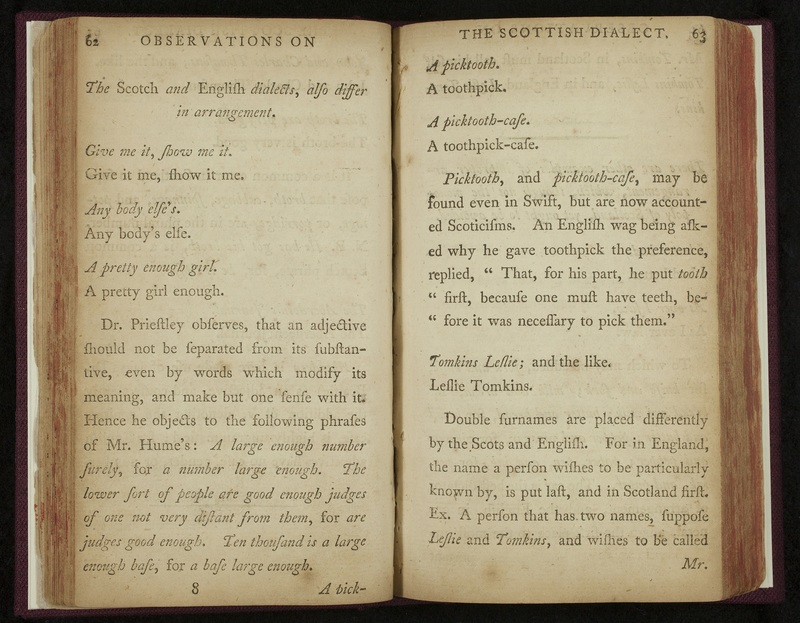 “Old things must then be done away—new manners must be assumed, and a new language adopted,” writes John Sinclair in the introduction to his Observations on the Scottish Dialect (1782). Sinclair’s dismissal of Scots, his country’s distinctive variety of English, reflects a common eighteenth- and nineteenth-century prejudice against forms of the language that varied from the “standard” English used in British governmental administration. He laments that the Scottish, the Irish, and the Welsh, as well as the inhabitants of several districts in England all “have many words and phrases peculiar to themselves, which are unintelligible in the senate-house, and in the capital.” Sinclair accordingly argues for the closing of the differences between English and Scots, so that “improvements” to the language of the south might permeate the north as well. The volume pairs an analysis of differences between the languages with a Scots-English glossary. In the pages on display, Sinclair discusses differences in word order, with phrases in Scots appearing in Italics. 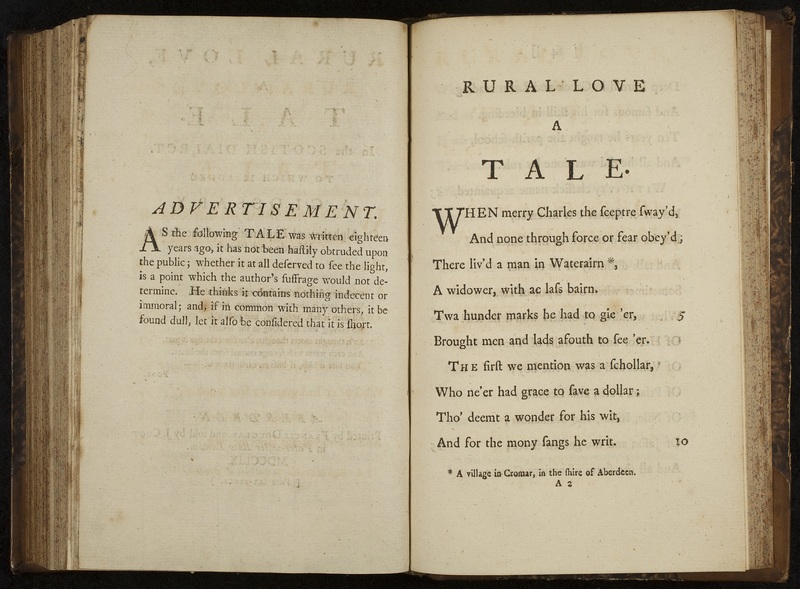 Robert Burns in poetry and Sir Walter Scott in prose are perhaps the writers best-known for the use of the Scots language in literature. However, several lesser-known works such as Francis Douglas’s Rural Love predate them. Raised near Aberdeen, Douglas wrote Rural Love while working as a baker in London in the 1730s. As his prefatory advertisement notes, he did not publish the poem for another 18 years, long after his return to Scotland, where he became a bookseller, printer, and author. In Rural Love, Douglas includes a glossary for readers unfamiliar with Scots. Several of the words from the poem’s first lines appear in that glossary, including:

2.   F. (Francis) Douglas. Rural Love, A Tale. In the Scotish Dialect. To Which Is Added a Glossary, or Alphabetical Explanation of the Scotish Words and Phrases. Aberdeen: Printed by Francis Douglas, sold by J. Coot, 1759. Call #: B1122 v. 2 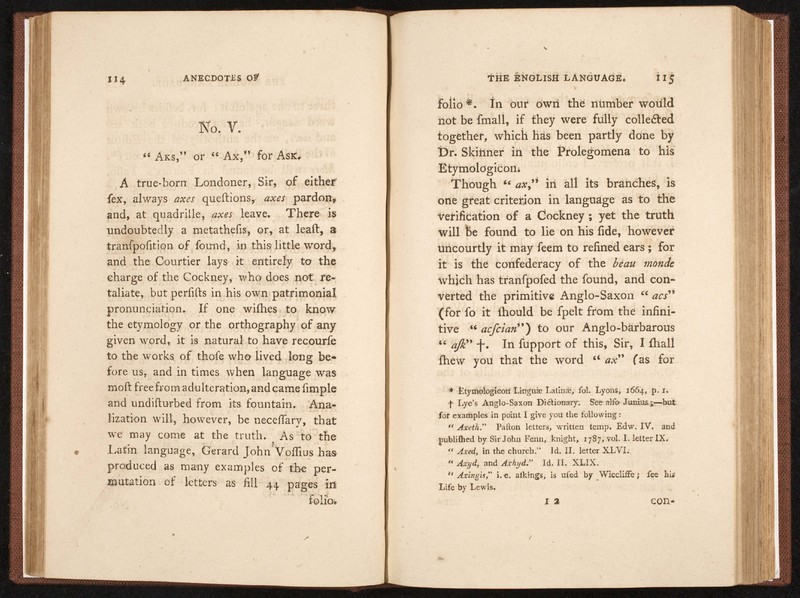 Speakers of so-called “Standard English” have often disparaged non-standard and regional dialects. In the posthumously published volume on display, Samuel Pegge raises a spirited defense of London English or Cockney (as it is sometimes known). Responding to the charge that Londoners “have corrupted and debased our language,” Pegge argues instead that many of their formulations are rooted in the language’s history. In the passage on display, he discusses the pronunciation Aks or Ax for Ask, which he notes serves as "one great criterion in language as to the verification of a Cockney.” It is speakers of London English and not the standard variety who are vindicated by an examination of the history of the word, Pegge explains:

[…] it is the confederacy of the beau monde which has transposed the sound, and converted the primitive Anglo-Saxon "acs" (for so it should be spelt from the infinitive "acsian") to our Anglo-barbarous "ask."

In this way, he inverts the usual charge of corruption of the language leveled against speakers of London English.

3. Samuel Pegge. Anecdotes of the English Language; Chiefly Regarding the Local Dialect of London and Its Environs; Whence It Will Appear That the Natives of the Metropolis and Its Vicinities Have Not Corrupted the Language of Their Ancestors.  London: Printed by J. Nichols and Son, for F. and C. Rivington, T. Payne, and J. White, 1803. Call #: C7871 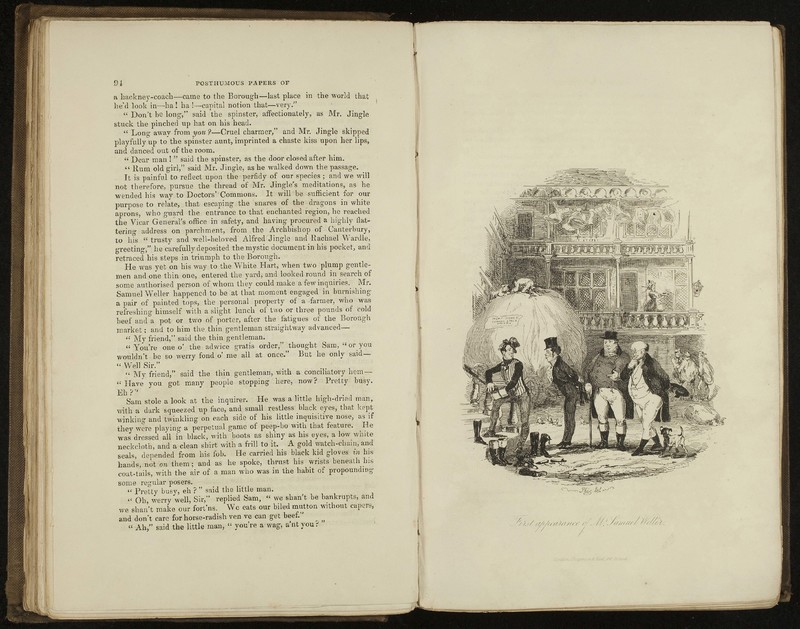 Charles Dickens penned one of the most memorable speakers of London English in Sam Weller of the Pickwick Papers. Though Weller doesn’t use the pronunciation aks for ask that Samuel Pegge discusses in his treatise on the local dialect of London, he does exhibit other characteristic speech features, such as the substitution of v for w and vice versa. In the passage on display, Weller makes his first appearance as he shines boots by the White Hart Inn. His first words are actually an unspoken thought, which Dickens nevertheless presents in London English: “You’re one o’ the adwice gratis order,” thought Sam, “or you wouldn’t be so wery fond o’ me all at once.”

Weller’s wit and distinctive mode of speech made him a success with readers, boosting the sales of Pickwick’s monthly episodes. We see this humor on display here in Weller’s droll reply to a question about the state of business: “Oh, werry well, Sir,” replied Sam, “we shan’t be bankrupts, and we shan’t make our fort’ns. We eats our biled mutton without capers, and don’t care for horse-radish ven ve can get beef.” 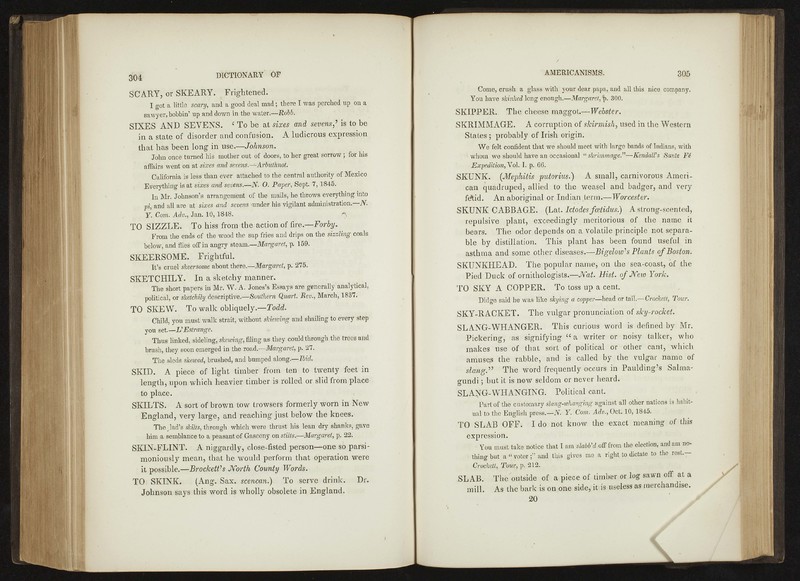 Published in 1848, John Bartlett’s Dictionary of Americanisms collects words and phrases “usually regarded as peculiar to the United States.” The volume contains words of American origin, provincialisms and colloquialisms, and “slang words which are not noticed by lexicographers, yet are so much employed as to deserve a place in a glossary.” Among its entries are words of Native American origin (maize, moccasin, moose, and skunk), Dutch origin (cruller, stoop, and kool slaa [coleslaw]), and a range of evocative phrases that will seem more and less familiar (to acknowledge the corn, to give him jessy, to make the fur fly). Bartlett also gestures toward regional dialects by noting the area in which a particular phrase originates or is most prevalent. However, as the entry for “to slab off” suggests, some phrases appear to have stumped Bartlett. He provides only Davy Crockett’s quotation by way of illustration.

The first edition on display was a gift to the library by the Department of English in honor of the retirement of Professor James Hartman, a scholar of English language and linguistics. 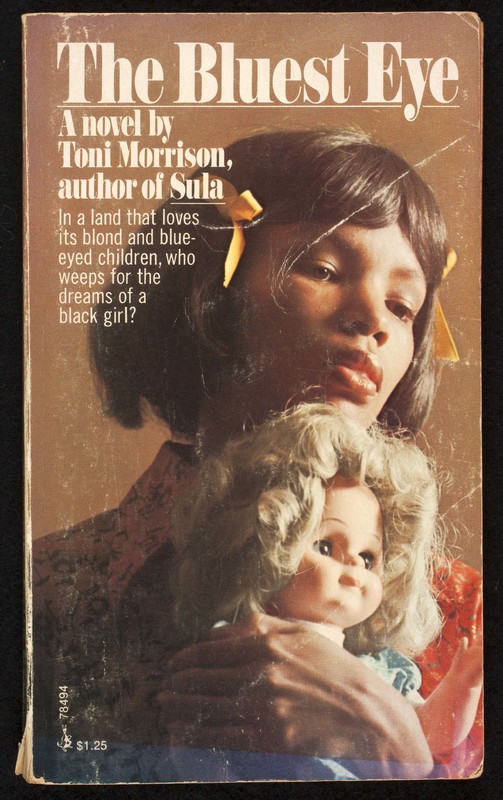 There are certain things I cannot say without recourse to my language. It’s terrible to think that a child with five different present tenses comes to school to be faced with those books that are less than his own language. And then to be told things about his language, which is him, that are sometimes permanently damaging. He may never know the etymology of Africanisms in his language, not even know that “hip” is a real word or that “the dozens” meant something. This is a really cruel fallout of racism. I know the standard English. I want to use it to help restore the other language, the lingua franca.

On display is a 1972 paperback edition of Morrison’s first novel, The Bluest Eye (1970). An early section of the novel begins with the phrase, “Quiet as it’s kept.” In her New Republic interview, Morrison cites a variation of this phrase as one particularly rich in meaning in African American English. 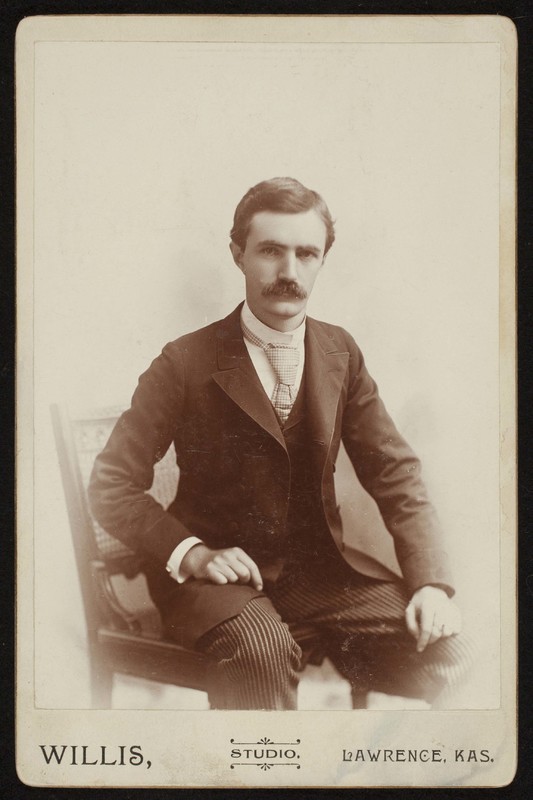 The remark that there is no such thing as a Kansas dialect rests upon a misapprehension of what is meant by the term. In just the same way that we speak of the flora and fauna of Kansas we may speak of the dialect of Kansas. . . Standard literary English is always a little behind the times. It is the stuffed and mounted specimen in the museum. Dialect is the live animal on its native heath.

William H. Carruth (1859-1924) was born in Kansas shortly before for it became a state. He taught German and English, first at the University of Kansas and then at Stanford. Carruth found special interest in the dialect of his home region, and in the 1890s he published a series of four “Dialect Word-Lists” in the Kansas University Quarterly. In his introduction to the word list on display, Carruth explains that all of the terms, unless otherwise noted, are ones that have been observed in Kansas. He invites his readers to comment on their familiarity with them and share additional words and alternate meanings. Some of the words on Carruth’s list may seem coddy, but only a huckleberry linguist would dast ignore them. 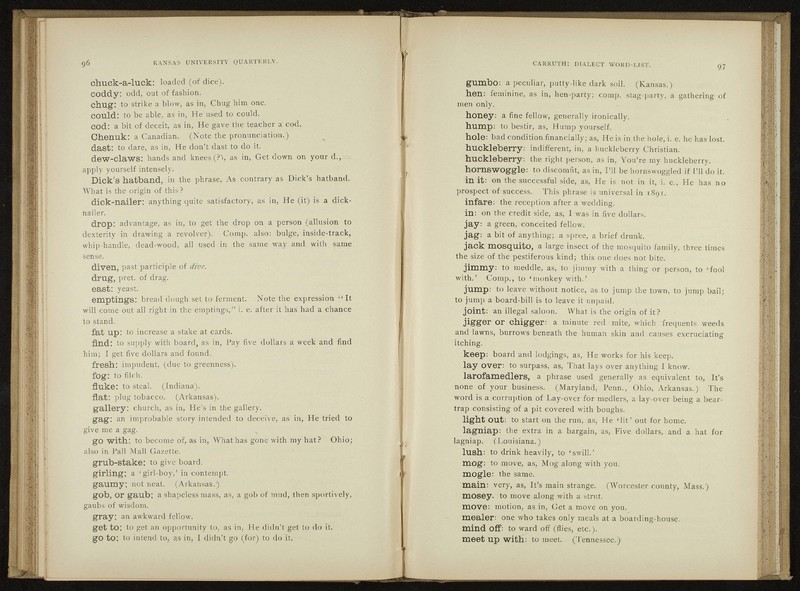 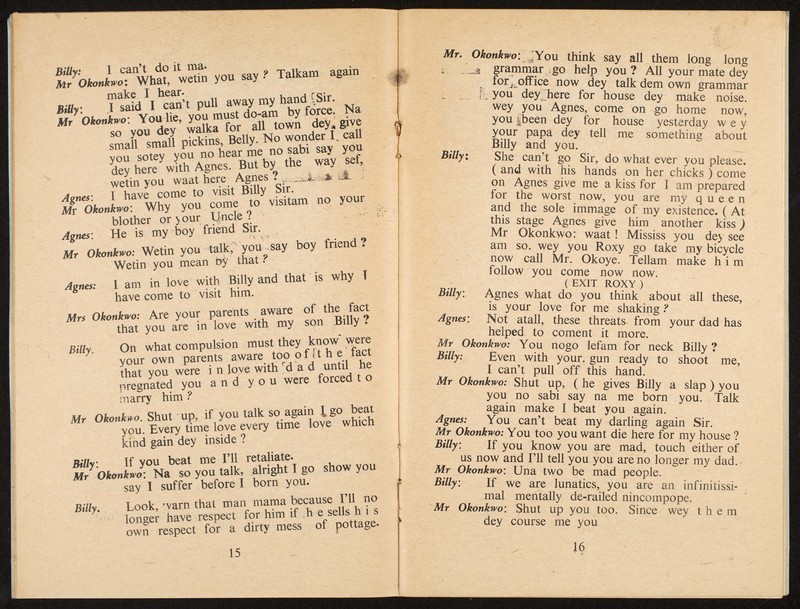 Scholar Edgar Schneider estimates that the number of English speakers in Nigeria is in the tens of millions, with perhaps 1/5 of the country’s population speaking English and half speaking Pidgin English, a simplified form of English combined with indigenous languages. English in Nigeria reflects the troubling legacy of British colonialism, but also a vibrant process of indigenization. The use of English and Pidgin English in informal and everyday contexts has increased since Nigerian independence in 1960. With over 500 languages spoken in the country, including three primary regional ones (Hausa, Igbo, and Yoruba), Nigerians tend to learn English as a second or third language.

The two volumes on display are examples of Onitsha Market Literature. In the 1960s, these chapbooks produced primarily by local publishers and writers flourished in Onitsha, a port and market town on the left bank of the Niger in Anambra State. Popular genres included fiction, drama, and advice. The writing handbook on display suggests the widespread interest in English in and outside of formal school contexts. In the play Agnes in the Game of True Love, characters speak in a spectrum of Nigerian English and Pidgin English, with some instances of code-switching (slipping between language varieties based on context and audience). In the melodramatic passage of family conflict on display, the speech of Mr. Okonkwo, Billy’s father, falls toward the Pidgin side of the spectrum, as exemplified by constructions like “no sabi say” and “long long grammar.” In Pidgin English, the repetition of words acts as an intensifier (as in “long long”).