Middle and Early Modern English: From Chaucer to Milton

Middle English developed gradually in the decades following the Norman Conquest of 1066. It emerged not only through the linguistic influence of Norman French, but also of Old Norse from the Viking populations that had settled in northern Britain. For much of the Middle English period (circa 1100 to the late 1400s), communication in English was essentially local, with first French and then Latin used for government and law. As a result, there was no shared national Middle English dialect, but rather great regional diversity in both speech and writing. Early Modern English emerges in the late fifteenth century as the language began to take on more national political and cultural functions. The arrival of printing in England in 1476 also fueled the beginnings of the standardization of the written language.

The periods covered in this case are times of significant linguistic change. Between roughly 1400 and 1600 there was a series of shifts in the pronunciation of English’s long vowels, and between 1500 and 1700 foreign loan words flooded into the language as English’s vocabulary expanded to meet its increasingly varied needs. 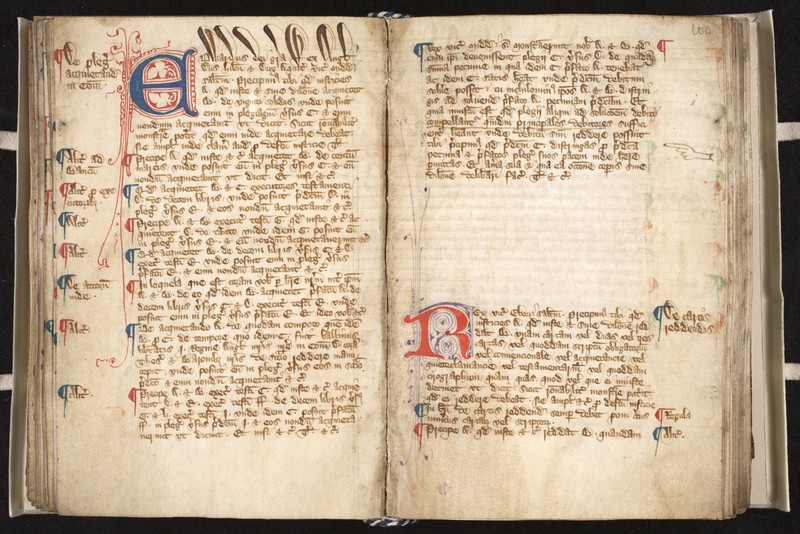 This composite manuscript volume suggests the multi-lingual environment of late-medieval Britain for it contains information in Latin, French, Law French, and Middle English. Its main text is the Latin Registrum brevium, a standard manuscript collection of legal writs providing the forms of English Common Law. The writs served as models for different legal actions and are accompanied by notes and rules for their use. In Spencer’s copy, red and blue initials and paragraph marks embellish the text. The little pointing hand that appears in the margin is called a manicule. Scribes and readers inserted these symbols to draw attention to particularly noteworthy passages. Though the primary text is in Latin, some notes appear throughout in Law French.

Appended to the end of the manuscript are several later and much plainer-looking Latin writs connected to Pembrokeshire and Humphrey Duke of Gloucester. With them is a short text in Middle English concerning a “cession yn eyr.” Sessions in eyre were medieval circuit courts conducted by a traveling justice moving from county to county. Transcribed by KU English Faculty member Misty Schieberle, this brief four-page text references Cardigan in Wales. An analysis of its linguistic features might enable us to identify its Middle English dialect and determine with greater certitude its connection to Wales. The image to the left is of the volume open to the Latin Registrum brevium, but a brief passage from the unornamented Middle English text is reproduced below. 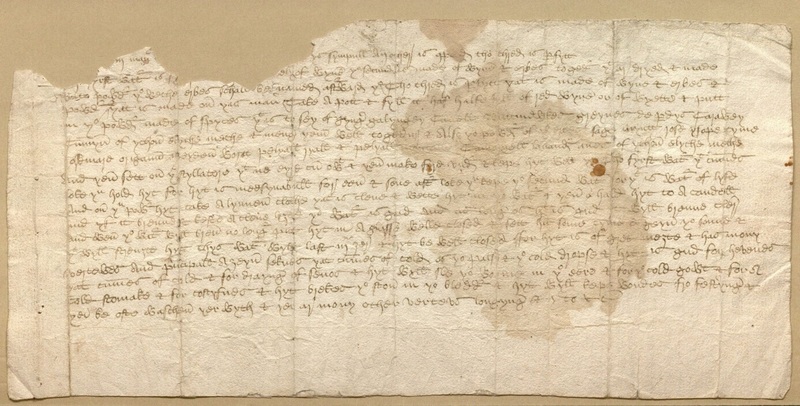 Feeling under the weather? This medicinal recipe dating from the 1400s provides directions for distilling a mixture of spices, herbs, and wine to treat what ails you. This single leaf, with its top three lines partially torn away, is one of the library’s few Middle English manuscripts. Though Spencer holds several thousand English estate documents (circa 1200-1900), including papers from the prominent North and Kaye families, those that date from before 1500 tend to be in Latin. This recipe or “receipt” offers an instructive example of unornamented, vernacular writing. Yet despite being in English, its script and Middle English linguistic features present a challenge for modern eyes. Click on the link for the full-size image, and see how much of it you are able to read.

This modest leaf also boasts an interesting provenance: it was once a part of the library of Sir Thomas Phillipps (1792–1872), an obsessive nineteenth-century collector who amassed the largest private collection of manuscripts of his day. 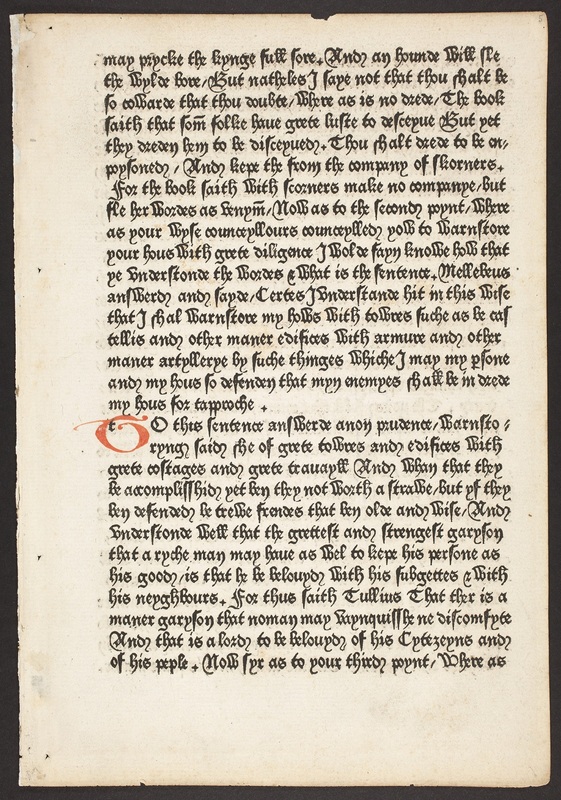 This leaf represents at least two “firsts”: it is from the first printed edition of Chaucer’s The Canterbury Tales, and it is from one of the first surviving books printed in England. The man responsible was William Caxton (circa 1420-1492), an English merchant-trader and diplomat. While living on the Continent, Caxton interacted with printers in Cologne. He then set about printing in Bruges, producing the first book printed in the English language, his own translation of Raoul Lefèvre’s Le recueil des histoires de Troyes. Not long after, Caxton returned to England and brought printing with him, establishing a press in Westminster in 1476. During the Middle English period, dialects varied widely, with this regional variation reflected in both written and spoken forms. Printing is one of the major forces that would contribute to the gradual standardization of written English; although this certainly was not a process that happened overnight.

The page on display is from the “Tale of Melibee.” It is a tale told by the character of “Chaucer” himself, and it is one of only two prose tales in The Canterbury Tales. 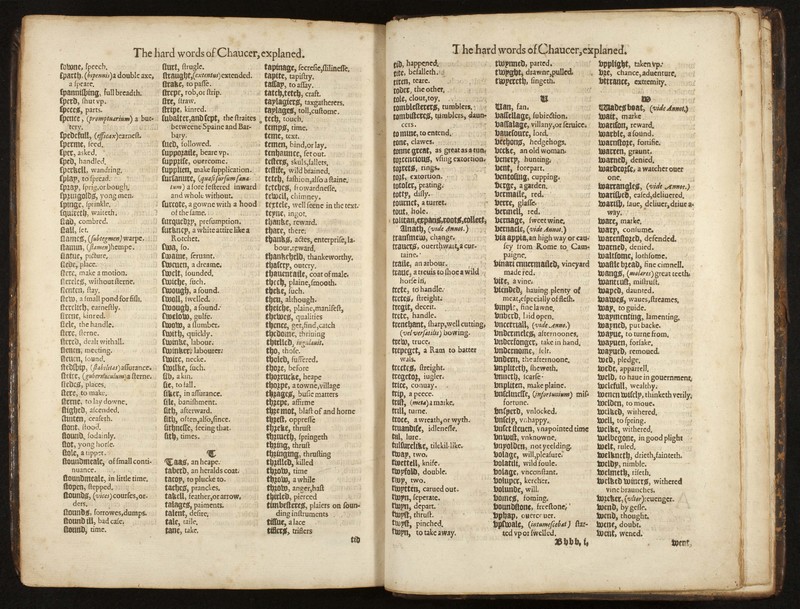 This collection of works by Geoffrey Chaucer was printed in 1598, approximately 200 years after he wrote The Canterbury Tales. The volume’s compiler, Thomas Speght, writes in his preface of complaints that Chaucer has been “much decaied by iniurie of time.” To remedy this, Speght includes a glossary of Chaucer’s “old and obscure words” for the benefit of his early modern readers. The inclusion of this glossary highlights the changes between Middle and Early Modern English with respect to vocabulary, pronunciation, and spelling. Some entries suggest alterations associated with the Great Vowel Shift, a series of changes in English pronunciation, wherein long vowels were raised and/or diphthongized. We see this in Speght’s glossing of tale as taile and thare as there. However, the majority of entries reflect a change in vocabulary. He defines wed as pledge and wend as thought. Altogether, Chaucer’s “hard words” demonstrate how over the course of two centuries English had shifted enough to require a fourteen-page glossary of roughly 2000 words.

Speght’s second edition of 1602 pursued the issue of language change even further. He enlarged his glossary to twenty-two pages, providing additional entries, expanded definitions, and information on the derivation of Chaucer’s Middle English words. 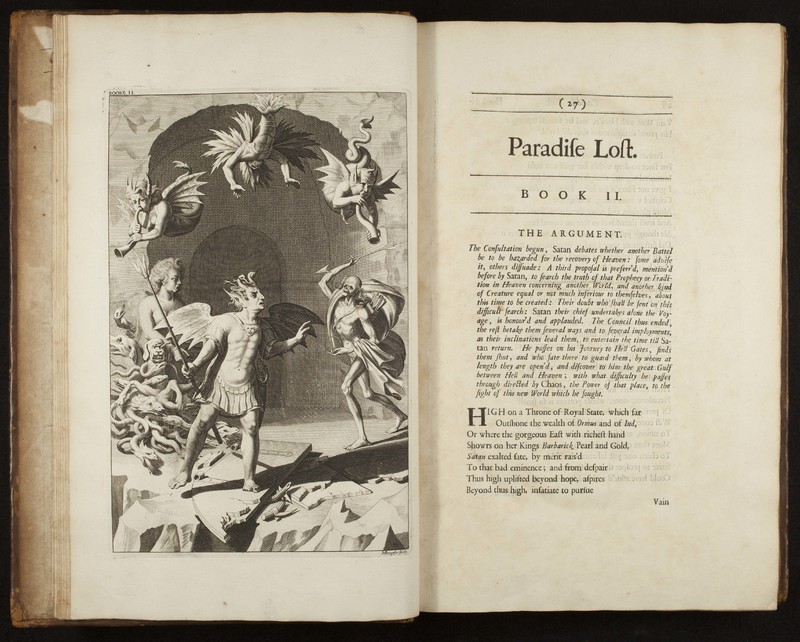 Poetic formulations and minor differences in spelling aside, the language of Milton (1608-1674) will look familiar to readers of modern English. During the early modern period, between 10,000 and 25,000 new words entered the English vocabulary, primarily loan words adapted from Latin and foreign languages. Accordingly, many early modern writers stand as the first evidence for a particular word in the Oxford English Dictionary. As of May 9, 2017, Shakespeare is cited 1495 times as the first evidence of a word; dictionary writers Thomas Blount (1618–1679), Randle Cotgrave (d. 1634?), and John Florio (1553–1625) are cited as the first evidence for 1466, 1350, and 1201 words respectively; and John Milton holds 556 first citations for a word.

Many of Milton’s first citations in the OED are for words transformed into a new part of speech. In Milton’s hands, something previously known as a verb or noun, might become, with an alteration or two, an adjective. Among Paradise Lost’s first citations for “e” words are expanse and effulgence as nouns and the adjectives endearing, echoing, and enslaved. This 1688 illustrated edition of Paradise Lost is open to Book Two, which is cited as the first use of anarch (n. the leader of a revolt); emblazonry (n. heraldic devices collectively), horrent (adj. bristling; standing up as bristles), and stunning (adj. that stuns or stupefies), among others. In an age of digitized (and thus keyword searchable) copies of early modern books, however, OED staff and scholars at large are discovering earlier citations for words all of the time. These are gradually being incorporated as entries are revised. As evidence of the shifting landscape, the number of "first evidence for word" citations that Milton holds in the OED has dropped from 556 to 547, between the May 9, 2017, when this label was first authored, and its inclusion in the online exhibition on January 30, 2017.