To Make the World Safe for Democracy: Kansas and the Great War

With the declaration of war on Germany, in April, 1917, Kansas and Kansans joined the rest of the nation in mobilizing troops, providing military training and education, and engaging in home front activities in support of food production, food conservation, fund raising, and comfort for soldiers, families, and Allies.

Kansas exceeded its quota of numbers of enlistments in the military, and established training camps, such as Camp Funston, at Fort Riley, to prepare new soldiers for military services. Kansas wheat became a precious commodity, needed worldwide, with corn becoming an important substitution for those at home. High school students and women at home joined in to help with the harvests. Kansans were encouraged to use less sugar, and the institution of “meatless” days and “wheatless" days was common. Women knitted garments for soldiers and orphans overseas, sewed bandages and provided medical supplies, and raised money through the sale and purchase of Liberty Bonds.

As patriotism fervor swept the nation, and the state, some Kansans grew increasingly critical of those from different backgrounds. Pacifists, many of whom came from Mennonite communities and had German speaking backgrounds, were regarded with suspicion and subjected to public ridicule and vandalism of their property. German Americans’ loyalty to the United States was suspect. There was a consistent program in Kansas to suppress the German language.

The University of Kansas was impacted by the war as well, with students and faculty leaving to serve in the military. The university community supported the war effort through conservation activities, fund raising for war relief efforts, and community involvement.

The “war to end all wars” concluded with the signing of an armistice on Nov. 11, 1918, and slowly soldiers began returning home. Kansas lost some 2,500 men in the line of duty.

Included in this exhibition are items drawn from the Kansas Collection and University Archives that illustrate life on the home front, the soldier’s experience, and the university’s response to a war no one expected would be repeated.

This is an online version of a physical exhibit that was on display in Kenneth Spencer Research Library, August of 2017 through January of 2018 . The exhibit was created by Sheryl Williams, emeritus curator of the Kansas Collectin, and Rebecca Schulte, University Archivist. For more information, contact ksrlref@ku.edu. 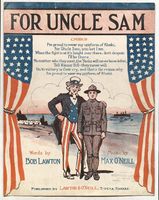