Dr. James Naismith was one of the first members of the KU faculty to volunteer to help the war effort. In her biography of James Naismith The Basketball Man, Bernice Larson Webb describes his activities. In June of 1917 he was employed by the Young Men’s Christian Association (YMCA) to travel around the U.S. to various army and navy training camps in an extensive lecture program aimed at “strengthening the moral character of American military men.” In the summer of 1917 he was chosen by the YMCA to travel to France to “study moral conditions among the troops of American Expeditionary Forces and to develop a program of sex education there.” He later became the head of the Bureau of Hygiene and worked from the YMCA headquarters in Paris.  He often wrote home about his experiences as in this letter to his friend Prof. W.C. Stevens.  In the letter he urges Stevens and other KU faculty to make an effort to “plan something for the lads that will make them jump into their studies with something of the enthusiasm and drive that they put into going “over the top." The 1918 Jayhawker included many photographs, illustrations, and stories relating to the war.  Dr. Naismith is pictured on the upper right hand corner of the page on the left side. 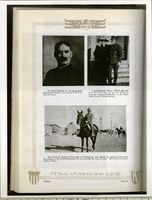 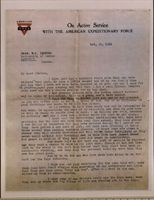 Carroll DeWitt Clark was a faculty member at KU from 1930 to 1968. He served in the Army Coast Artillery in France during WWI. He was a jazz enthusiast and played saxophone in the military band. In this letter to his mother written from “Somewhere in the interior of France, about Oct. 9 I think”, he describes his first few days after their arrival. He writes “I was on a detail unloading supplies from our ship and the first thing we unloaded was 250 tons of creamery butter from Swift & Co., Hutchinson, Kansas. Gee it seemed good to see something from good old Kansas again.” Note that a portion of the letter has been cut out by military censors. Included in his papers is this postcard notifying his mother that their troop ship arrived safely.

During the war, the Alumni Association printed excerpts from letters written by KU students involved in wartime activities in The Graduate Magazine. May Gardner, who graduated from KU in 1897, joined the Red Cross as a canteen worker and was sent to France. She describes the trip over on a troop ship, their living quarters “somewhere” in France, and her duties serving hot cocoa, donuts and sandwiches to soldiers as they disembark from troop trains. She was in Paris on Nov. 11, 1918, when the war ended. She writes – “Today, every one is in the streets. Flags are everywhere. Every available vehicle is full of humanity. Trucks are loaded with men, women and girls—American boys and French girls are leading snake dances through the streets, old and young joining in. It takes an hour to walk a block. Proclamations have been printed telling people to give free vent to their joy. I am certainly a lucky person to be in Paris for this day.”

In the early part of the 20th century, KU students often kept scrapbooks and photo albums during their years on campus. Shown here is a page from the photo album of Aeo Hill who graduated from KU with degrees in Economics and Commerce in 1920 and Fine Arts in 1922. She is pictured at top right with a friend in uniform.  The album dates from 1916 through 1918. There are also two scrapbooks created by her in the University Archives. 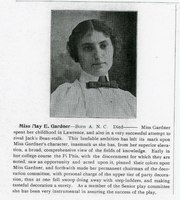 On Oct. 17, 1917, Robert Leigh Gilbert wrote a letter to his mother telling her that instead of traveling to Detroit as he had told her he went to Chicago and enlisted in the Navy. In the letter he explains that after four years of saving his pay he would enter KU at the age of 22 “just the right age to attend University. I will have the practical knowledge of what I take in Navy then can go to U. and get polish put on what I already know.” Robert did attend KU after the end of the war, but graduated with a degree in Journalism instead of continuing as a machinist. He was active at KU, as a cheerleader, a member of ROTC and as yearbook photographer. He also found time to correspond with several French girls as this letter from “your petite amie of France, Zette” shows. Robert is shown at left in this photo of the 1922/23 cheer squad.