African American soldiers were segregated in their units during WWI. Sergeant Vernon Carson Coffey served with the American Expeditionary Forces, 1917 – 1919. He was assigned to the 806th Pioneer Infantry Regiment, 2nd Army, received his training at Fort Riley, went oversees with his regiment to France, and returned to Kansas City after mustering out in 1919. After the war, he continued his work as a train porter for the Missouri Pacific Railroad, and later became substantially involved in railroad employee union work. This diary belonged to Corporal Vernon C. Coffey, and contains a handwritten account of his military service, beginning with his reporting to Fort Riley, Kansas in 1917. Inside the cover, it is stamped “A.E.F. passed as censored.” 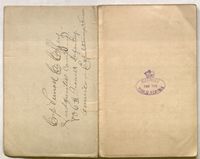 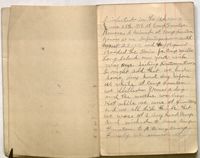 Willard Hayden was from Douglas County, Kansas, and served with the U.S. Army Medical Corps in France. He reported for basic training at Fort Riley, Kansas, July 29, 1918, was sent to France in October, and worked at U.S. Hospital 2. After the Armistice he was reassigned to a convalescent hospital in Hyers, France, where most of the patients were victims of gas or influenza. He returned to the U.S. June 14, 1919. 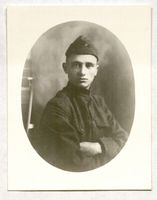 Postcard from William Hayden to his parents, announcing his arrival in the U.S. June 14, 1919, aboard the Madonna.

Letter written by William Hayden to his grandparents, July 29, 1918, detailing his early experience at Fort Riley.

Deane Ackers was from Abilene, Kansas, and attended the University of Kansas, graduating in 1917 with a Bachelor of Science degree in civil engineering.  He enlisted in the Army, and served from 1917-1919 as a member of the 16th Infantry of the American Expeditionary Forces, First Division.  For bravery in combat he was awarded the Distinguished Service Cross, and the French Croix de Guerre.  Shown here are the French Croix de Guerre (right) and a Victory Medal (left) which includes five clasps engraved with the names of battles.

Wint Smith was from Mankato, Kansas. He attended the University of Kansas, and served as a combat infantry officer, with the American Expeditionary Forces in England and in France. After the war, he graduated from KU, obtained a law degree, served in WWII, and represented Kansas in the U.S. House of Representatives from 1947-1961. His diary, which begins with Smith's departure from New York City aboard a troop ship, the "Mongolia," is quite detailed and anecdotal. The diary ends with an entry for May 10, 1918, while Smith is convalescing from a knee operation. On the right page, the entry for Sept. 30 describes the actions and feelings of the soldiers on board as they travelled through the dangerous submarine zone. 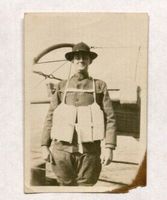 Photo of Wint Smith aboard the Mongolia, wearing his life vest, 1917. 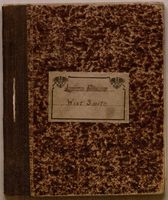 The Indian Leader, April, 1918, Haskell Institute, Lawrence, KS. A student publication of Haskell Institute (now Haskell Nations University). The cover of this issue shows the Haskell service flag, with each star representing two hundred former and current Haskell students serving in the military. A partial list of names most recently added to the roster were included inside the publication.

Chicago Daily News War Book, 1918. Published for the use of American soldiers, sailors, and marines.  The end of the book shows a list of “helpful” phrases in German. 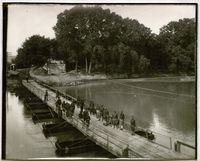