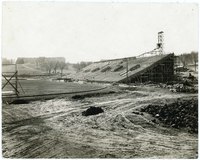 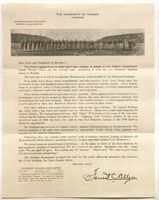 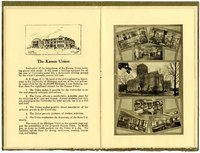 At a mass meeting in Robinson Gymnasium on Dec. 12, 1919 the KU community agreed to move forward to construct a new football stadium and student union. It was argued that these two structures would both improve the university and stand as memorials to those who fought and died in World War I. A Million Dollar Drive was launched in November 1920 and pledges began pouring in. Unfortunately the million dollar goal was never reached, but construction on the stadium began nonetheless. The site of old McCook field was chosen for the new stadium and on Stadium Day, May 10, 1921, over 4,000 turned up to bring down the bleachers and eat barbeque. Chancellor Lindley broke ground by plowing across McCook field.

La Force Bailey and Clement C. Williams of the School of Engineering designed the new stadium after the stadiums at Harvard and Princeton. The drawing was published in a booklet titled The Kansas Stadium written to aid in the drive to find money for construction. On Thanksgiving Day, 18,000 fans packed the yet to be completed stadium for the Kansas-Missouri game, which Kansas won 15 to 9. After that glorious victory, then Director of Athletics, “Phog” Allen, wrote a booster letter to the “Sons and Daughters of Kansas” encouraging more people to give to the building campaign.

Despite the fact that the University of Kansas Memorial Corporation had not collected enough money to fully build the Union, the decision was made to begin construction in 1925. Modeled after the recently built student union at the University of Michigan, the Kansas Union was described as “a building equipped for all the uses of University social life, a democratic meeting ground for the whole University, women and men.”

Among much pomp and circumstance, the cornerstone was laid on April 30, 1926. Included here are photographs taken of the parade, with the 100 member KU marching band, Chancellor Lindley delivering his address, the crowd gathered in front of the partially constructed building and the cornerstone being set into place.

The building was completed in stages as money became available. The brochure "The Necessity of Finishing the Union" was written and distributed in 1928 in an effort to find additional funds to complete the second floor of the building including the assembly hall, now called the Ballroom.  At right is also a pledge card stamped paid for a total of $48.00. Above is a photograph of the main lounge in the Union taken in 1929 and published in the 1929 Jayhawker yearbook. By 1938 the Union was complete except for the sub-basement and two-thirds of the third story, intended originally for guest rooms. 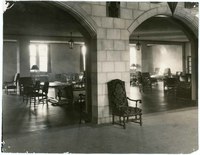 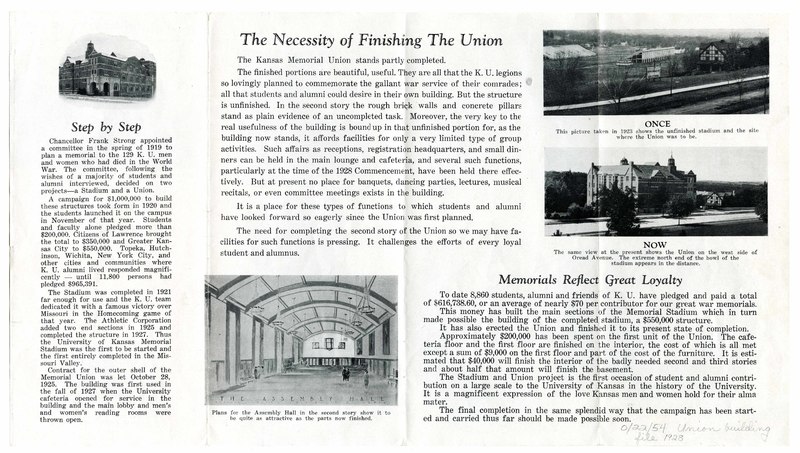