Peggy Hull, (later known as Peggy Hull Deuell) the first accredited woman war correspondent, was born Henrietta Eleanor Goodnough, in 1889, near Bennington, Kansas. She grew up determined to be a journalist. By 1916 she was living in Cleveland, Ohio, and working for the Cleveland Plain Dealer.  She convinced her editor to allow her to accompany the Ohio National Guard when it was deployed to the New Mexico border to pursue Pancho Villa. She fashioned her own military uniform. Her reporting on camp life (she was not allowed to cross the border) garnered her much attention, and she subsequently moved to El Paso, Texas, to work for the Times. Here she won her editor’s support to travel to England and France to cover the experiences of U.S. soldiers in 1917. After returning to the states she was determined to be accredited as a war correspondent. She was determined to go to Siberia to cover the U.S. Expeditionary Force defending the White Russian faction from the new Bolshevik government. After much politicking and cajoling, Peggy was successful in receiving her accreditation, and travelled to Vladivostok as a reporter for the Cleveland Press. 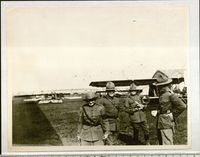 Photo of Peggy Hull with officers at the airfield of the air wing attached to the artillery training camp, Le Valdahon, France, Nov., 1917.

Henrietta (Peggy) Goodnough Hull’s passport, 1917. Peggy Hull was denied a passport several times, before receiving clearance for a six month trip to England and France, with the intention of reporting on U.S. soldiers.

WWI era hat worn by Peggy Hull while in France. 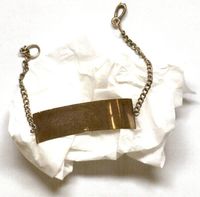 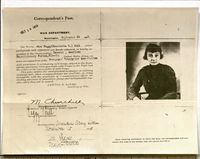 First page of a manuscript article written by Peggy Hull, undated. Describes her efforts to convince her newspaper editor in El Paso to send her to Europe to cover the war.

Peggy Hull was the first woman to receive an official correspondent’s pass, giving her rights to military transportation, housing, a uniform, and the privileges of a commissioned officer.

In her quest for accreditation she had arrived in Washington, D.C. in the summer of 1918, determined to find a newspaper willing to send her back to France, and determined to fight the bureaucracy that would impede a woman trying for accreditation as a war correspondent.  An expedition was being readied to send to Siberia, and she quickly changed her plans, wanting to travel there.  She managed to find a newspaper in Ohio, the Cleveland  Press, willing to send her to report on the war, and obtained the support of General March, Army Chief of Staff,  who was favorably disposed to help her, given her past efforts on reporting in France.  He wrote to the Office of Military Intelligence:

If your only reason for refusing Miss Peggy Hull credentials is because she is a woman, issue them at once and facilitate her procedure to Vladivostok.