Field hockey was organized at KU in 1915. It was considered “the perfect sport” for women. By 1973, the team was the two- time Kansas state champions. Coached by Sharon Drysdale, the team joined the St. Louis Field Hockey Association so that members could qualify for regional and US Field Hockey Association tournaments. In 1976, the team, part of the Women’s Intercollegiate Athletic program, represented the state at the AIWA Region VI tournament. The success of the team did not stop the sport from being cut from the 1976-1977 budget, following a trend at other Big 8 schools. The budget was restored, largely through Student Senate funding, to allow for the transition back to a club sport in 1978. 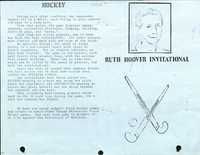 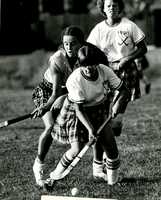 Photograph of a game against Emporia State, 1981.