There is a long tradition of women’s basketball at KU, dating back to 1897 when the game was introduced at KU by student Lola Bell Brown. The 1903 team is credited as the first official women’s team, although there is a reference to a 1902 team.  When the WAA was formed in 1912, basketball was the only sport to have a championship.

The 1968 team, under coach Marlene Mawson, was the first to officially compete under the newly formed Women’s Intercollegiate Athletics program. On February 20, 1969, KU won its first game. In 1973, Marian Washington took over as head coach while also serving as the women’s athletics director, like Mawson did, and the head coach for track and field. The first scholarship of $200 was awarded in 1975 to Adrian Mitchell, who is KU’s second all-time leading scorer. In the spring of 2004, Bonnie Hendricks was hired as the new head coach, replacing Marian Washington. Under Hendricks’ direction, the team reached the Sweet Sixteen in 2012 and 2013. She, in turn, was replaced in 2015 by Brandon Schneider.

KU Basketball has won six Big 8 tournaments and seven regular season conference titles, including three in a row, 1979-1981. The team has also appeared in 13 NCAA tournaments. There have been four All- Americans, 28 1,000 point scorers, and nine WNBA players in the program’s history. 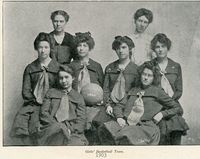 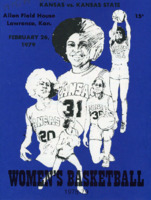 Program for the February 26, 1979, game against Kansas State. This is the earliest game program, and among the few, in the University Archives' holdings.

Photograph from the KU game against Missouri in 1988. 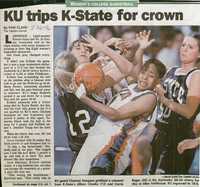 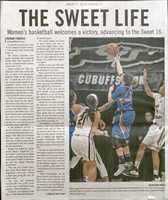 Additional images may be found in the University Archives Digital Images collection by searching under the key words "women's basketball" or by individual names.