Women’s Golf at KU began under the WAA in 1927. By 1950, it was considered an “incomplete” minor sport, meaning that there were not enough members for a full season. However, Marilyn Smith, co-founder the LPGA, won the National Collegiate individual title in 1949 while at KU. Golf was one of the original sports offered under the Intercollegiate Athletics for Women program when it was formed in 1973-1974. The team won the Big 8 Conference in 1990.  Members have participated in the NCAA tournament in 1990, 1994, and 2014. Notable alumni from the more recent past include Donna Lowen, Amanda Costner, and Yupaporn “Mook” Kawinpakorn. 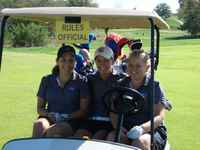