“19 Days and Nights” was first given as a speech by Chancellor Chalmers after the events of April 20 to May 8.  The speech was also published in the May 30, 1970 issue of the Kansas Alumni magazine.  Laurence Chalmers had only been Chancellor for eight months so was relatively new to the University.  The speech was written to walk the listener/reader through events and to provide explanations of his actions during those 19 days and nights.  He wanted to make the point that KU was “caught in a larger social and ideological struggle” as were other colleges and universities across the nation.

The Union fire occurred on Sunday night April 20.  Fearing more violent actions, Governor Docking placed Lawrence under curfew on the evening of Tuesday April 22. Originally planned for one night only, Lawrence officials petitioned the Governor to extend the curfew to Friday April 24.

On April 30, President Nixon announced on national television that US troops were moving into Cambodia and four days later on May 4th four students at Kent State University were killed by Ohio National Guardsmen. Anti-war rallies and commemorations for those killed immediately ignited KU and other universities.

An ROTC Review that had been scheduled for May 8th was cancelled based on recommendations made by the Executive Committee of the University Senate that included six faculty members and three students along with the three ROTC Commanders.   On Wednesday evening May 6, a large crowd gathered at the ROTC building and windows were broken by rocks.

On Thursday May 7, Chalmers was informed through the media that he would be speaking at a convocation in Hoch Auditorium at noon.  “I was being co-opted and I knew it.”  The Student Senate wanted him to declare the university to be officially opposed to the war in Southeast Asia – some called for a strike to shut down the university.  In Hoch with 3,500 students in attendance he “reaffirmed his belief that the university would forfeit its claim to an open forum, to objectivity, to the search for truth and to the tolerance of the broadest spectrum of beliefs and ideas if it were to take an official stand with reference to any specific social, political or economic issue.  I would not commit KU to such a position and I opposed closing the institution.”

Rumors were rampant on campus. On Thursday afternoon a group gathered in front of Allen Field House was informed that Chalmers had called for a convocation the next Monday.  Then word was spread that he cancelled the convocation.  He had not done either of these things.  That evening a woman called residence halls claiming that she was from the Chancellor’s office – “The National Guard has been called onto campus and we urge you to remain in your residences.”  This was untrue.

All Thursday afternoon, evening and early Friday morning, the Senate Executive Council met.  Two to three hundred people were waiting outside of Strong Hall.  At 2:00 a.m. Chalmers went out to inform the crowd that there would be a convocation at 2:00 p.m. that day at Memorial Stadium.  He announced that there would be a proposal prepared by the Executive Council available for consideration at 9:00 a.m. that morning.

In his account Chalmers states that he and Bill Ebert, student body president, approached the stadium on the afternoon of May 8th with trepidation but was met by a standing ovation.  He was greatly relieved to find that nearly 15,000 students, faculty and staff had gathered, at least whatever happened would not occur as a result of a “small vociferous minority.” Along the route from the top of the hill to the stadium were people presenting petitions in support of the Chancellor.

The alternatives proposed by the Executive Council were presented to the crowd:

Each school and college will appoint an ombudsman to mediate any differences between the student and the instructor.

The Chancellor called for a standing “Aye” vote and the crowd rose as if one with a thunderous word of endorsement, only a few “Nay” votes were heard.  There would not be a strike, the university would remain open.

In the weeks that followed until the end of the semester it was reported that 91% of the students remained in school and only 9% elected their option to return home.  Large numbers of students attended nearly 100 workshops and discussion groups in addition to attending classes and taking finals. 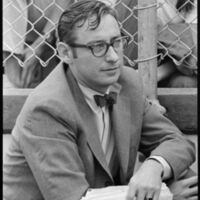 Audio of Speech given by Chancellor Chalmers 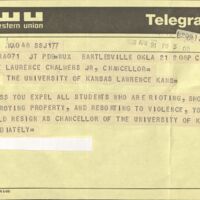 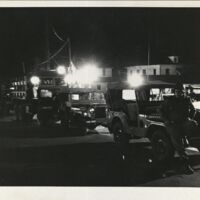 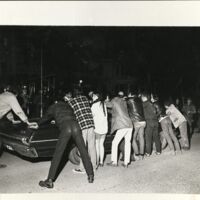 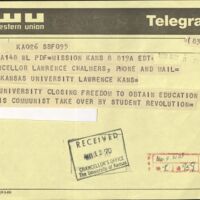 Negative telegram sent to the Chancellor, May 8 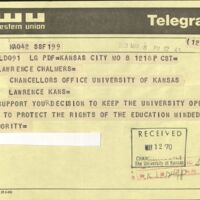 Supportive telegram sent to the Chancellor, May 8 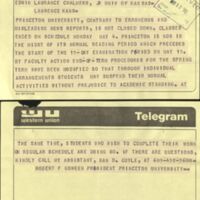 Telegram from Robert F. Goheen President of Princeton University, May 8 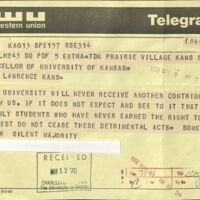 Negative telegram sent to the Chancellor, May 9 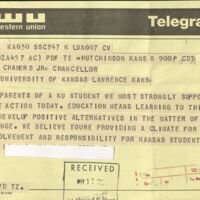 Supportive telegram sent to the Chancellor, received May 11 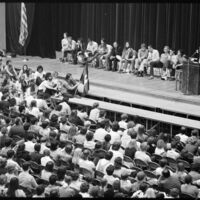 Convocation in Hoch Auditorium, May 7 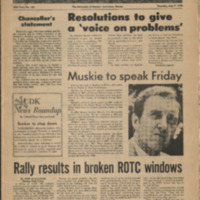 Front page of the May 7 issue of the University Daily Kansan.  Articles include: the Chancellor’s announcement about “A Day of Alternatives”; Student Senate resolutions; announcement about US Senator Edmund Muskie’s speech on May 8; and a report on the anti-war rally on May 6 at the Military Science building. 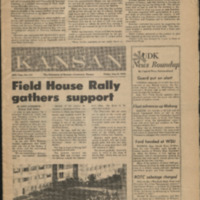 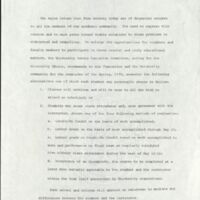 Statement of the Senate Executive Committee outlining the recommended alternatives, May 8 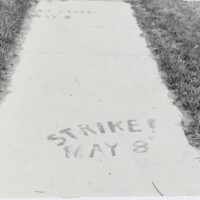 Strike May 8, spray painted on sidewalk 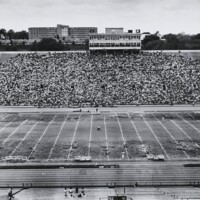 Chancellor Chalmers speaking before students, faculty and staff gathered in Memorial Stadium to vote on the recommended alternatives, May 8 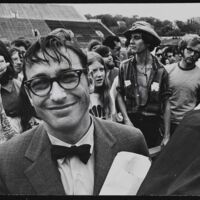 Chancellor Chalmers at the Day of Alternatives convocation, May 8 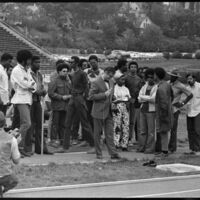 Chancellor Chalmers with Black Student Union representatives at Memorial Stadium on the Day of Alternatives, May 8 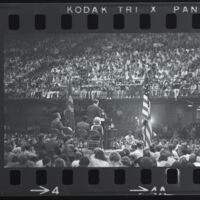 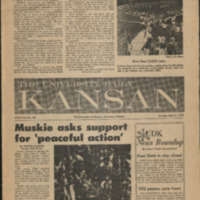 Front page of the May 11 issue of the University Daily Kansan describing the all-University convocation held at Memorial Stadium on May 8 to decide on the Day of Alternatives recommendations and the “major policy speech” given by Senator Muskie asking the students for their help to support peace candidates in the up-coming fall elections. 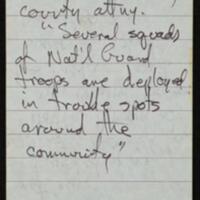 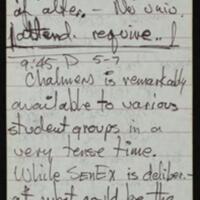