The civil rights and antiwar protests of the 1960s and 1970s radically changed campuses across the nation, specifically by expanding students’ legal rights. Student demands for free speech, including free press rights; due process; the rights to protest, demonstrate, and organize; access to their own educational records; and taking an active role in institutional governance, led to a rights revolution at KU and across the country.  In 1970, KU’s new Student Senate reflected this revolution.

In 1968, KU student demands to have a say in the university decisions affecting their lives led to 1,500 students protesting in front of Strong Hall. To forestall more protests, student body president Clif Conrad called for a Student Faculty Committee on Governance--composed of six students and six faculty members--to create a way to give students voting membership in the University Senate and more input on university affairs and issues. Their final report made sweeping recommendations that led to profound and long-lasting reform of the governance structure at the University of Kansas. They called for the creation of a Student Senate with representation based on the academic units of the College and Schools, as opposed to living groups. A new University Senate included all members of the Faculty Senate and the Student Senate, and the University Council, which functioned as the governing and policy-making unit, included 13 students. The Senate Executive Committee added three students, with a student to be named as vice chair. Importantly, students were added to most University Senate committees, including Academic Policies and Procedures. Shared governance was born at the University of Kansas, and in 1968 KU students wielded greater authority than at any other university in the United States. “This is a very radical thing--something which even Berkeley and Columbia don’t have,” explained student body vice president Joe Goering.

In the spring of 1969, ninety-four percent of students voting favored the new Senate Code, which soon won the approval of Chancellor Wescoe and the Board of Regents. The effect of the code was seen immediately when a student was named to the chancellor’s search committee for the first time, and schools and departments added students to their committees, based on the code’s policy of 20 percent student representation. The Senate Code laid the foundation for KU student activism for decades to come and even in the short term may have forestalled a more turbulent future for KU. “In my opinion, the reason K.U. ‘weathered’ the Vietnam era as well as it did was the opportunity for students, faculty, and staff to participate in the decision-making process,” wrote Chancellor E. Laurence Chalmers more than a decade after he left KU. And a university press release extolled the “the most progressive University governmental innovation in the nation.” As the 1969 Jayhawker yearbook described it, “The new Senate Code is symbolic of a quiet revolution.  [It] provides the mechanisms by which students may participate in deciding the goals, operations, and purposes of the university.”

Independent Student Party candidate David Awbrey won the Student Senate presidency and initiated the new governance structure.  1970 was a pivotal year for the Student Senate and was a resounding success on two fronts: the Student Senate gained financial control over the entire student fee (previously it had control over about 40 percent of the total), and it passed the Code of Student Rights, Responsibilities, and Conduct. This code, which was largely a response to treatment of students in the 1969 ROTC protest, focused on confidentiality of student records and disciplining of students, especially related to nonacademic conduct.  Chancellor Chalmers called it one of the finest  statements of student rights and privileges ever passed.

In addition, student leaders played a key role in the Day of Alternatives proposal developed by the Senate Executive Committee that included three students.  At the event, Student Body President Bill Ebert organized a petition backing Chancellor Chalmers to counter statements of Governor  Docking about a “great agitation” to fire the Chancellor.  The Chancellor got a standing ovation from the 12,000 students attending the unique convocation, and by the summer 7500 students and 169 faculty members signed petitions of support.  The next year, Student Senate would further its support and show its maturity by allocating $130,000 of the student activity fee back to the KU general fund, cut by a suspicious Kansas Legislature, to support faculty salaries.

In the fall of 1970, student leaders fought back on a policy recission of the 20 percent student membership on policy-making committees. The rule still stands today; as the new University Core Committee policy states:  “As student opinions and concerns are important in the development of the Core Curriculum, three students shall serve as voting members.”

The control of student fees, the Code of Student Rights, Responsibilities, and Conduct, and student input on University policies continue to be the basis for a strong student voice at KU. But some observers question whether this voice is heard in the same way today as when the Senate Senate demonstrated its power in 1970. 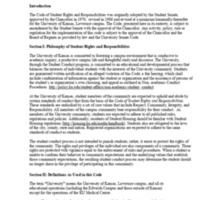 The Code was a key accomplishment of the new Student Senate in 1970. It was largely a response to the treatment of students in the 1969 ROTC protest and focused on confidentiality of student records and disciplining of students. 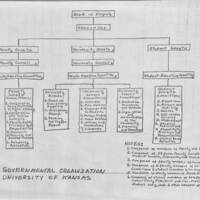 A handwritten version of the KU governance structure—a foundation of student activism for decades and a mechanism for surviving the turbulent events of spring 1970. 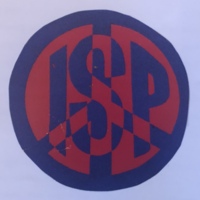 Campaign bumper sticker for the Independent Student Party (ISP) that elected David Awbrey, the first President of the Student Body under the new governance structure, 1969-70. 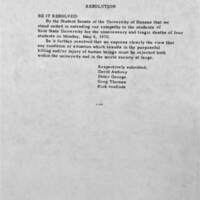 The National Guard killing of four Kent State University students ignited protests around the country and at KU.  These protests, including the actions of student members of the Senate Executive Committee, led to the Day of Alternatives, a middle-ground between shutting down the university and business as usual. 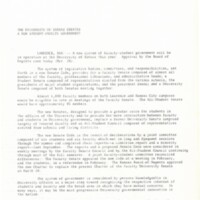 The Student Faculty Committee on Governance released its report calling for a new governance structure that would include students in the policy decisions that affected their lives and create a new Student Senate. 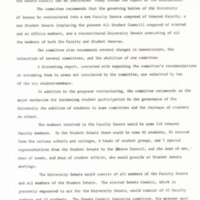 The Board of Regents approved the new faculty-student governance system in March 1969. This KU press release proclaimed, “it may the most progressive University governmental innovation in the nation.” 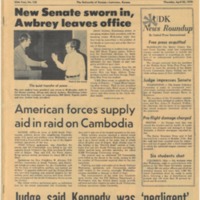 The first major transition of the new Student Senate was the “quiet transfer of power” between Student Body Presidents David Awbrey and Bill Ebert. Although Ebert was not in the ISP party, Awbrey was supportive of him because of their shared opinions on university affairs. 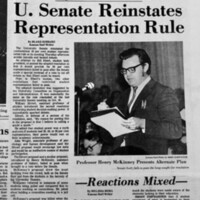 Student Senate fought hard to overturn a brief recission, led by faculty members, of the 20 percent student membership on policy committee rule. Before the vote, students marched from Strong Hall to Murphy Hall, where the University Senate was meeting, to demand the change. 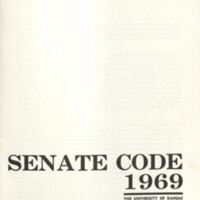 “The New Senate Code is symbolic of a quiet revolution. [It] provides the mechanisms by which students may participate in deciding the goals, operations, and purposes of the university.”  - 1969 Jayhawker yearbook 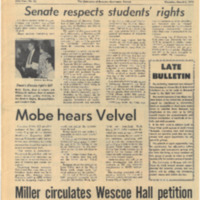 A major focus of the Code of Student Rights and Responsibilities was the confidentiality of student records and ensuring that no disciplinary actions be taken against a student other than what was prescribed in the Code. 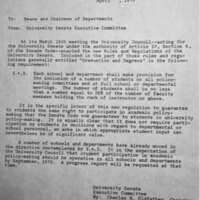 In this letter to “Deans and Chairmen,” Charles Oldfather, chair of the University Senate Executive Committee (SenEx), clarifies that the 20% Senate Code rule guarantees students the “same right to participate in academic policy-making” as in “university policy-making.” The ruling was not accepted well by all schools and departments, leading to the rule being rescinded in October 1970, only to be reinstated a few weeks later, through student persistence. 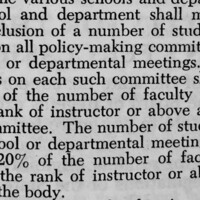 The all-important 3.4.2 rule of the Senate Code that mandates that 20 percent of university policy-making committees be comprised of students as voting members.