Organized in 1968, the Black Student Union (BSU) at KU reflected the activism of Black students at many predominantly white colleges and universities across the United States and was rooted in the nation’s Black Power Movement. Its founding mission to address the needs of KU Black students and serve the local Black community has continued to this day.

1970 was a pivotal year for the Black Student Union. On February 26, it released a set of demands to address the racism and the lack of Black representation at KU. The demands included that every department have a least one Black faculty member, that funding be increased for BSU, and that Black representation on administrative and governance committees be expanded. Another key demand was additional and meaningful support for the Black Studies Program beyond just being offered as a minor. The demands were supported by Black faculty and staff members as well as other campus allies. As a result of the demands and publicity surrounding them, gains were made in these areas including the number of Blacks hired in administrative positions. BSU also had a role in hiring a graduate teaching assistant (GTA) for the Black Studies degree program, located at the BSU Afro House. 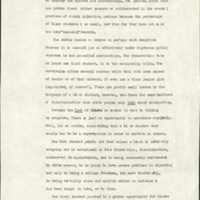 Nature of the University. Statement distributed by Black Student Union expressing what the Univerity was like for Black students, 1970. 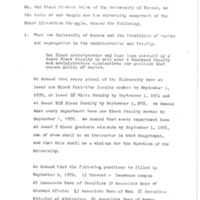 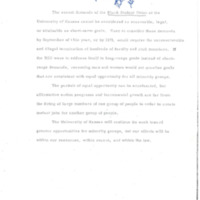 Statement for the Black Student Union by Chancellor Chalmers, March 5, 1970 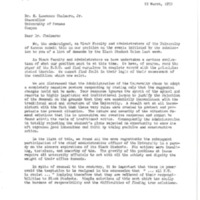 Letter from KU's Black faculty and administrators to Chancellor Chalmers in support of the Black Student Union demands and expressing their displeasure with his reponse to the demands, March 12, 1970. 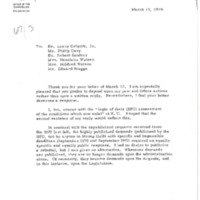 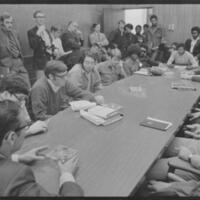 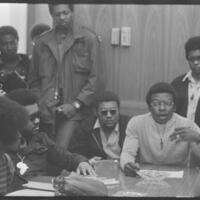 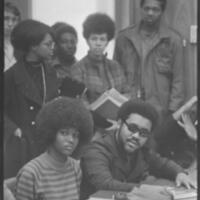 Not surprisingly, BSU also faced its share of resistance. They did not receive the level of funding requested from Student Senate, nor were all students happy with the amount the organization did receive. Employees at the University Press refused to print the BSU newsletter, Harambee, due to what they considered its offensive content. In protest of the issues surrounding Harambee, BSU members threw issues of the February 23 University Daily Kansan into Potter Lake. 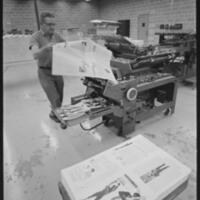 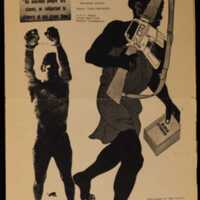 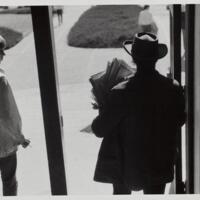 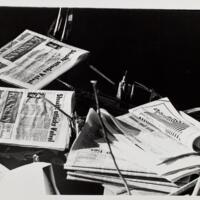 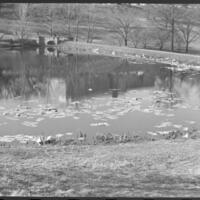 Still, BSU maintained its mission to improve conditions for KU’s Black students.  It was involved in various other forms of activism on campus as well.  Part of their funding supported the Afro House, a cultural center open to all members of Lawrence’s Black community. BSU held film screenings, lectures and classes, and other programs to highlight Black culture and history. Additionally BSU worked with other campus groups in advocating for a greater say in the running of the University, and in protesting the Vietnam War, racism, human rights violations and other social issues of the time. BSU leaders also spoke at the May 7 Student Convocation. 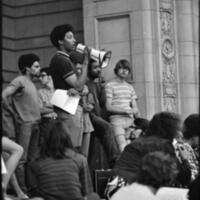 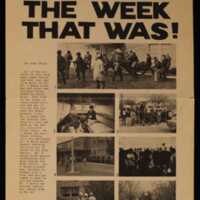 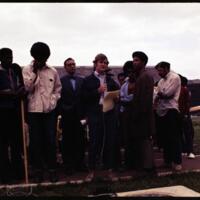 Black Student Union Members at the University Convocation held in Memorial Stadium, May 8, 1970. 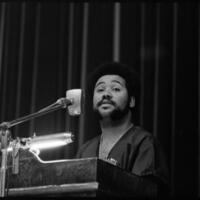 Black Student Union Member speaking during the student convocation, May 7, 1970. 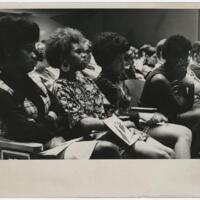 BSU closed out 1970 by organizing a strike for the week of December 6. A rally was held on the steps of Strong Hall December 7 in support of a fired Black Studies GTA and to advocate for justice in the killing of Rick Dowdell. It was attended by over 500 KU students. The strike ended early in support of Black faculty and staff members meeting with the Regents on December 14 to discuss the firing of the GTA that was against existing policies and done without due process.

After 1970 BSU continued to have a role in advocating for and getting important information to Black students on campus. An example of this is the production of the “Kansas University Black Perspective” brochure that outlined the purpose and goals of BSU, and included information regarding Black fraternities and sororities, the Office of Urban Affairs, Supportive Educational Services, the Department of African Studies, Financial Aid, and the Offices of the Dean of Men and Women. 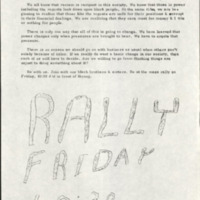 Flyer for a Black Student Union rally in front of Strong Hall, December 7,1970. 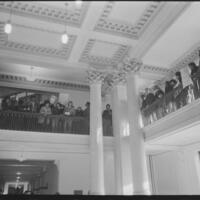 Protesters outside of the Chancellor's Office in Strong Hall as part of the Black Student Union strike. December 1970. 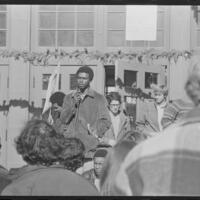 Speaker addressing the crowd at a Black Student Union rally in front of Strong Hall, December 7, 1970. 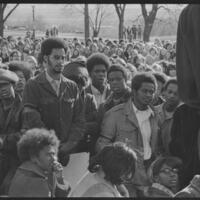 Crowd at the Black Student Union rally in front of Strong Hall, December 7, 1970. 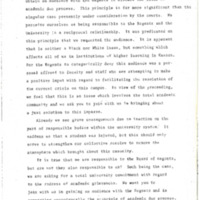 Statement by KU Black Faculty and Administrators regarding the firing of the Black Studies Program GTA without due process, December 7, 1970. 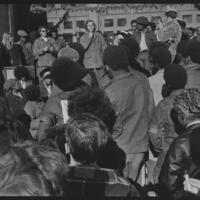 Speaker addressing the crowd at the Black Student Union rally in front of Strong Hall, December 7, 1970. 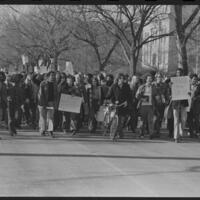 Protesters Marching Down Jayhawk Boulevard to the Kansas Union as part of the Black Student Union strike, December 1970. 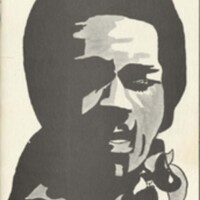