They applied again in September of 1970.  This time their request was approved by the Student Executive Committee but the Chancellor again denied the request.   Chalmers wrote regarding their application “we are not persuaded that student activity funds should be allocated to support or to oppose the sexual proclivities of students, particularly when they might lead to violation of state law”.  The students would be tolerated on campus, in April 1972 they were even allowed a tiny office in the Union, but neither financial support nor official recognition would be given.

Throughout the fall of 1970 the LGLF continued to meet.  Early in the semester on August 30 in a meeting at the Kansas Union the group listened to Jim Chesebro, the chairman of the National Gay Liberation Alliance.   He stressed the importance of “gay pride” and listed the major goals of the gay liberation movement as being recognition, understanding, equal rights and achievement of an identity that was “not established by the straights.”

On Sept. 23 the Front handed out leaflets at the Granada Theatre at a showing of the movie “The Boys in the Band.”  “Homosexuals in our society are consistently and cruelly oppressed by the myth that they are in some ways less than their fellow men,” the leaflets said.  Later that fall the LGLF published a solidarity statement in the UDK supporting the strike called by the Black Student Union in protest of the firing of Gary Jackson.

On March 2, 1971 the Gay Liberation Front marched down Jayhawk Boulevard in solidarity with women to celebrate International Women’s Day.  The Front in turn was supported by the Women’s Coalition when the Coalition sponsored a dance in the Student Union for Gay Liberation.  The Chancellor’s Office had met several times over the request by GLF.

After repeated attempts to gain recognition through standard University channels the Front finally brought charges against the Chancellor on March 29, 1971.  The case was heard at the United States District Court in Topeka and nationally known attorney William Kunstler, agreed to represent the LGLF.  The suit was denied in 1972.

Ten more years would go by before the Gay and Lesbian Services of Kansas (as the Front was then known) was officially registered and received funding from the Student Senate. 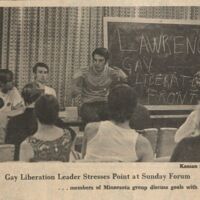 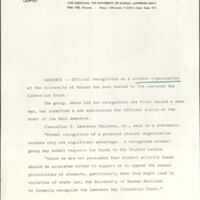 Sept. 5, 1970 press release announcing that formal recognition of the Lawrence Gay Liberation Front had been denied by the Chancellor 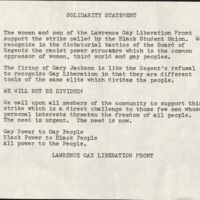 Solidarity Statement written by the LGL in support of the Black Student Union, fall 1970 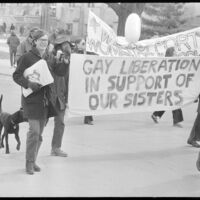 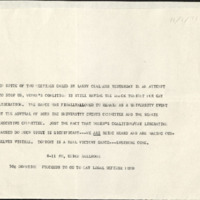 Announcement confirming that the Gay Liberation dance sponsored by the Women’s Coalition would be held despite opposition, Oct. 1, 1971 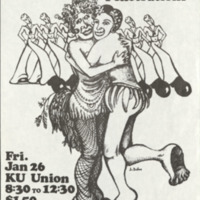 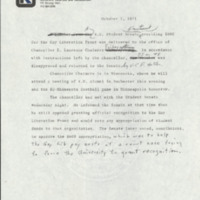 Press release announcing that the Student Senate voted to appropriate $600 to the Gay Liberation Front despite the Chancellor’s refusal to recognize the Front, Oct. 1, 1971 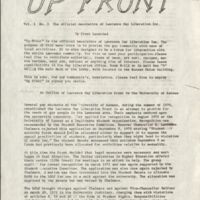 First issue of Up Front the official newsletter of the Lawrence Gay Liberation Front, 1973, pg. 1 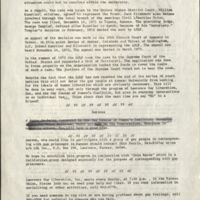 First issue of Up Front the official newsletter of the Lawrence Gay Liberation Front, 1973 pg. 2 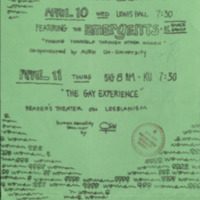 Flyer announcing an event on woman to woman relationships, April 1973 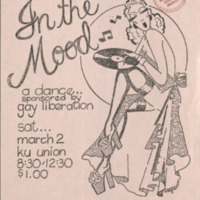