In a speech given in Kansas City in September 1969, just 10 days after he was installed as the new Chancellor, Lawrence Chalmers gave his personal opinion on the war “There have always been people who objected to every war this country fought, but the war in Viet Nam is perceived by our students as politically unjustifiable and morally indefensible, and I agree with them.”

Anti-Vietnam War protests had been occurring on the KU campus since 1965 and rallies for peace even earlier.  Much of the pro-peace effort was focused against the ROTC, the Reserve Officers Training Corps, which had been established at KU in 1919 at the end of World War I.  On May 3, 1963 the first protest was held against the Chancellors’ annual all ROTC review by the KU Student Peace Union (KU SPU).   In March 1965, KU SPU president, Charles Hook, slashed his wrists and splashed blood on ROTC posters.  The Military Science building was often the target for rock throwers and fire-bombers.

On May 15-16, 1965, KU SPU and the Kansas University Students for a Democratic Society joined with other campus groups to participate in the first national teach-in against the war.  The teach-ins were held on 122 college campuses and linked by a special radio hook-up to discuss the war in Vietnam.  On October 1969 one of the largest protests occur when 3,500 students, faculty and Lawrence townspeople take part in National Vietnam Moratorium Day.

1970 saw an escalation in student activism along with the escalation of the war. On April 8 a student strike was called to protest the delay of promotion by the Board of Regents of associate professor Lawrence Velvel and assistant professor Frederick Litto.  Velvel who had spoken out against the results of the 1969 Chicago 7 trial had inspired a crowd to march down to the Douglas Courthouse where damage was done to the building.  Litto’s production of a play in Europe had been criticized in Congress as obscene.  The strike didn’t materialize although many students boycott classes for a rally at Strong Hall then go down to Potter Lake for a rock festival and Pleasure Fair.  That night, Abbie Hoffman, one of the Chicago 7 defendants, speaks at Allen Field House.  The crowd is unimpressed and many walk-out.

When President Nixon ordered the US to enter Cambodia on April 30, students erupted across college and University campuses.  The most tragic event occurred on May 4 at Kent State University where four students were killed by Ohio National Guardsmen.

On May 5, 400 students march across KU’s campus from the Memorial Union to the Military Science building and ending up at the National Guard Armory in north Lawrence.  Protesters carried a flag-draped coffin representing the students who had died at Kent State and many people carried black flags.  Because of the tension on campus the University Senate Executive Committee along with the Commanders of the three ROTC units made the decision to cancel the annual Tri-Service ROTC review.

A May 11 University Daily Kansan article listed anti-Vietnam committees being coordinated through a central bureau in the Dean of Women’s office.  Included were a Congressional Action Committee, a Speakers Bureau, a Theatre group that would present guerilla theatre productions, a Community Action Outside Lawrence group and a Community Action in Lawrence committee.  A Peace Commencement Fund was established urging the university community to donate the money that they would have used to rent regalia to help finance 1970 political campaigns for peace candidates. This idea had originated at Yale University.  Peace dove arm bands were distributed, causing some members of the Kansas Legislature to protest the peace symbol being worn at commencement.

The fall semester began quietly with few demonstrations.  A march down Massachusetts Street is held on October 25 and a Halloween Peace Walk is held with 200 participants on October 31 ending at a rally in South Park with a 24-hour vigil for peace.  The event is co-sponsored by the Lawrence Peace Action Coalition and the KU Student Mobilization Committee.

Anti-war protests continue for the next four plus years ending with the fall of Saigon on April 30, 1975.  The KU Chapter of the Vietnam Veterans Against the War (KUVVAW) grows in membership and distributes leaflets and copies of the Veterans Voice published by the national organization on campus. Their message extends to advocacy for veterans rights.  On Feb. 18, 1974, the KUVVAW organizes a convoy to Fort Leavenworth, the federal penitentiary, to hold a peace vigil and a vigil on military prisoner’s rights.  Later that evening noted peace activist, Phillip Berrigan, speaks at the United Ministries building. 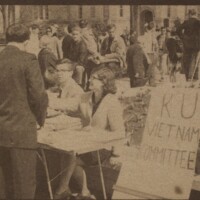 The KU Vietnam Committee in 1966 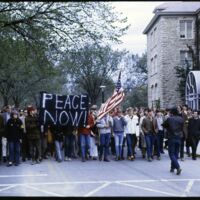 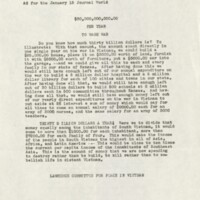 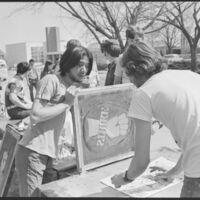 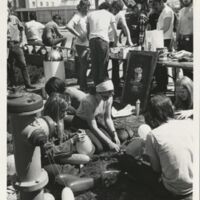 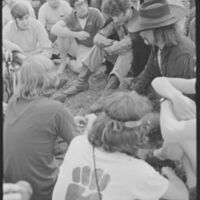 Abbie Hoffman is surrounded by students during the Pleasure Fair on Strike Day, April 8 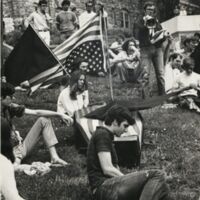 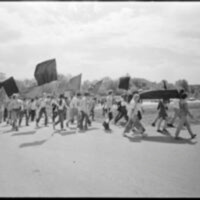 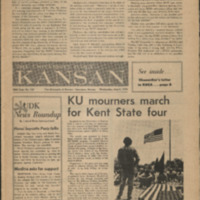 Front page of the May 6th University Daily Kansan 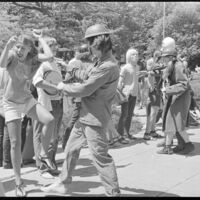 A street theatre protest on May 8, the Day of Alternatives 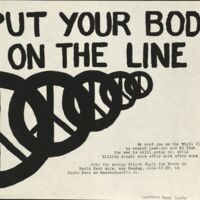 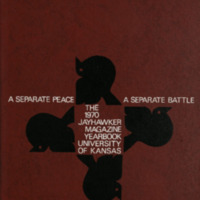 Cover of the 1970 Jayhawker yearbook with peace doves 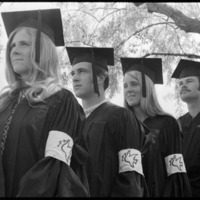 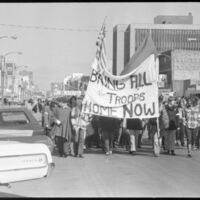 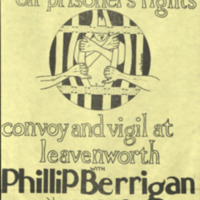 Flyer distributed by the KU chapter of the Vietnam Veterans Against the War advertising their event at Fort Leavenworth, Feb. 18, 1974 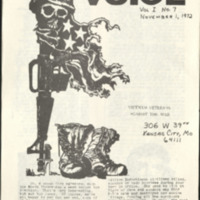 Nov. 1, 1972 issue of the Veteran’s Voice published by the national Vietnam Veterans Against the War organization