Since 1947 the Associated Women Students (AWS), originally called The Women’s Self-Government Association, served as the focal point for women’s issues on campus.  Under the auspices of the Dean of Women’s office, they published K.U. Cues the first official handbook for women, covering etiquette, dancing party rules and what to wear when. KU was fortunate that Emily Taylor became Dean of Women in 1956.  In the words of one of her students “she stimulated a climate at the University that presaged a national revolution that changed forever our understanding of gender roles, sex discrimination, and opportunities for women.” By the spring of 1970, many women at KU were more interested in politics, careers and birth control than in etiquette and through the groundwork that Dean Taylor laid they had resources available to move with the times. In 1958 she had established the first Commission on the Status of Women on a college campus and began to build a resource library that still exists today.

In early 1970 the AWS officially became the Kansas University Commission on the Status of Women with Suzanne Bocell as the first president.  The Commission had two goals -- to inform university women of their status in society and to guide them in their struggle for change and betterment.

On Aug. 27 a small but determined group of women passed out leaflets on campus promoting birth control and urging the establishment of a birth control clinic at KU.  Betty Friedan, president of the National Organization of Women (NOW), had just called for a nationwide strike by women to commemorate the 50th anniversary of the adoption of the Nineteenth Amendment granting women the right to vote and women at KU were paying attention.

In addition to the KU Commission a second group called the Women’s Coalition began in 1970 with goals similar to the Commission but independent of university oversite and more diverse in that they sought to include women in the Lawrence community.  They established a center in the Wesley Foundation building offering abortion counseling, self-defense classes and a baby-sitting coop.  The Coalition operated as a collective with all members having equal say instead of a few selected leaders.

On Sept. 2 more than a hundred members of the Women’s Coalition met in the Union.  At the meeting they broke up into small groups to discuss issues of concern including the inability to acquire birth control pills at Watkins Hospital and the drafting of women into the military.

On March 2, 1971, International Women’s Day was celebrated for the first time at KU.  A group of about 40 men and women marched across campus with banners and balloons.  Representatives of the Lawrence Gay Liberation Front marched in solidarity with the women’s groups.  Workshops were held at the Union in the afternoon and an evening celebration took place at the Wesley Foundation building.

The first issue of the Women’s Coalition Newsletter was published on Dec. 6, 1971.  The topics covered included discussion of one of the principles of the group – that they wanted to be a loosely run organization creating “a lack of direction for the whole Coalition, the difficulty that new women find in trying to become part of the Coalition, and the contradiction between trying to be a group open to all women and at the same time be a group composed of individual women with individual opinions.”

Several months later on Feb. 4, 1972, a group of women and children “peacefully seized” the East Asian building at 1332 Louisiana.  Calling themselves “The February Sisters”, they declared in a news release “that this building was taken primarily because it was easily accessible” and because the East Asian Department would be moving to the newly built Wescoe Hall so the space could be used as a Child Care Center, meeting one of their demands.  Their original list of six demands included: an Affirmative Action Program; a free Day Care Center; the Vice Chancellor of Academic Affairs position be filled by a woman; an end to grossly unfair employment practices; an autonomous Department of Women’s Studies; and a Women’s Health Program.

Later that day a release was sent out by the University announcing that Chancellor Chalmers had taken “four major steps to further advance equality for women and ethnic minorities.” The four steps were: Elizabeth Banks, assistant professor of classics and art history, had been appointed to a new staff position designed to be a focal point for the concerns of women; the Office of Urban Affairs had been redesignated the Office of Minority Affairs; Academic Affairs, Business Affairs and Student Affairs were directed to initiate plans for affirmative action; and an Advisory Committee on Affirmative Action was being established.

The women had taken this drastic action because the Administration had continually delayed action to establish an Affirmative Action Program.  The US Department of Health, Education, and Welfare had ruled that all universities receiving federal funds were required to file a program of specific action to end discrimination against women.

Eventually the University did respond to many of the demands made by the February Sisters.   Hilltop Child Care opened in the Wesley Foundation building in August 1972, an Affirmative Action Board with a woman as chair was appointed, Watkins Hospital started to provide better health care specifically for women, and women were hired for several administrative positions. 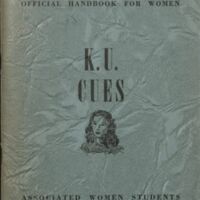 K.U. Cues, the official handbook for women by the Associated Women Students, 1947 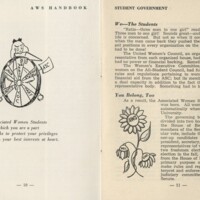 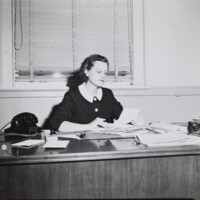 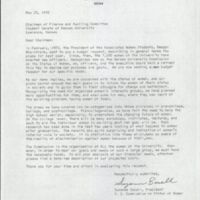 Letter announcing the change from Associated Women Students to the K.U. Commission on the Status of Women, May 25 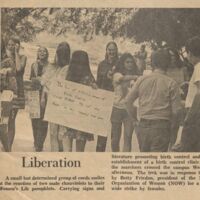 Women distributing leaflets on campus promoting birth control and urging for the establishment of a women’s clinic at KU, Aug. 27 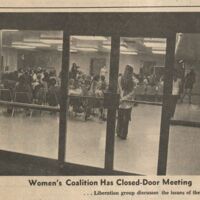 The Women’s Coalition in a closed door meeting at the Student Union, Sept. 3 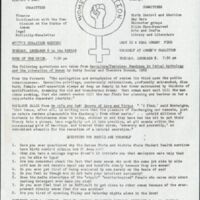 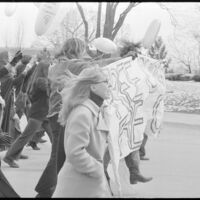 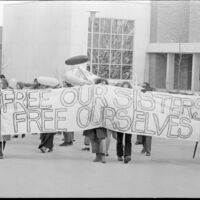 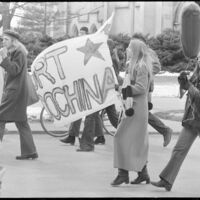 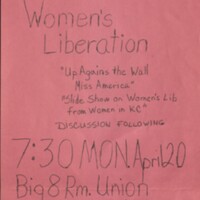 A flyer advertising women’s liberation films to be shown at the Student Union, 1971 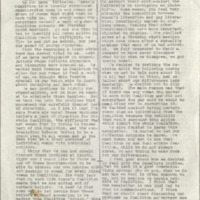 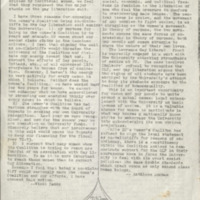 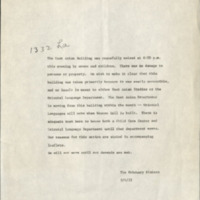 The February Sisters' announcement that they had seized the East Asian building, Feb. 4, 1972 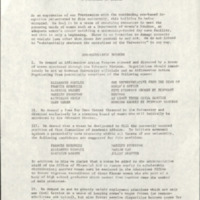 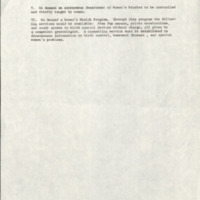 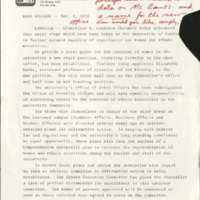 University news release in response to the seizure of the East Asian building by the February Sisters, Feb. 4, 1972 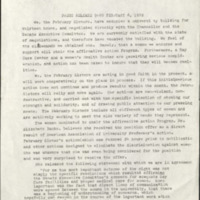 Press release from the February Sisters announcing that they had vacated the building after negotiations were satisfactory, Feb. 6, 1972 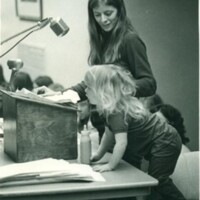 Christine Leonard, a member of the February Sisters, speaks at a podium, 1972