On July 20 about 60 protesters had gathered near the Gaslight Tavern at 13th and Oread Ave.  Angered by the death of Rick Dowdell and cheered on by a large group of spectators they began breaking street lights, opening fire hydrants, and setting fires.  They also flipped over a Volkswagen in the middle of the street.  A member of the crowd tried to set the car on fire with matches but fled towards the crowd as police approached.  One patrolman shouted an order to shoot the would-be arsonist.  Another policeman crouched and took aim at the protestor who had tried to light the car on fire.  The bullets hit 18 year old Harry Nicholas Rice in the back of the neck and graduate student Merton Olds in the right leg.  Students tried to carry Rice into the Gaslight but were hampered by tear gas that had been thrown by police.  Nick Rice was taken to Lawrence Memorial by ambulance where he was declared dead on arrival.

The next day a large crowd gathered in front of the Gaslight Tavern and listened to several speakers including George Kimball, a former student and SDS member who had run for Douglas County Sheriff.

A procession of nearly 300 people walked through downtown Lawrence on July 23 to pay tribute to Tiger Dowdell and Nick Rice.

Nick was the son of two KU alumni, Esther Christianson Rice and Harry Dollar Rice.  He was a Zeta Beta Tau pledge and had been cited for valor earlier that year as one of the students who had helped firemen when the Union burned.

After hours of testimony the result of the inquest held on Sept. 1 was that Nick’s death had been caused by the act of person or persons unknown and that there was not sufficient evidence to determine whether the death was or was not caused feloniously.

As a result of the deaths of two young men in Lawrence, Kansas and the deaths of students in Ohio and Mississippi, President Nixon commissioned an investigation on campus unrest.  Representatives of the Commission conducted intense investigations on those deaths visiting Lawrence during the last week of July.  More than 2,000 questionnaires were distributed, approximately 500 of which were returned and analyzed.  The team interviewed representatives of city government, students and faculty, members of the Black community, and businessmen and “street people”.

The report submitted to the President on Sept. 26, 1970 gave as part of their findings “Campus protest has been focused on three major questions: racial injustice, war, and the university itself.”  Students find the university to be “restrictive” and they denounce “the university relationship to the war and to discriminatory racial practices.”  Recommendations for President Nixon, the Government, law enforcement, the university and students were given and for everyone the following:

Understanding must be renewed.

All Americans must come to see each other not as symbols or stereotypes but as human beings. 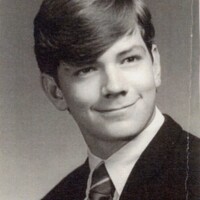 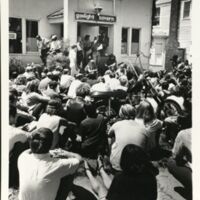 Crowd gathered in front of the Gaslight Tavern listening to speakers. George Kimball is seated on the steps, July 19 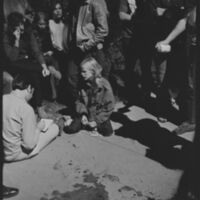 Protesters interviewed after the killing of Nick Rice, July 20 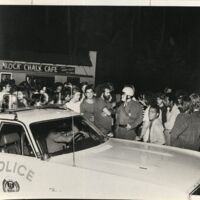 George Kimball speaking with a police officer in front of the Rock Chalk Cafe, July 22 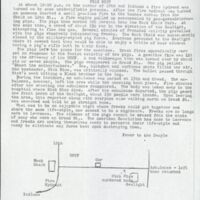 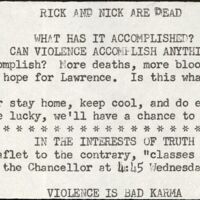 “Rick and Nick are dead” flyer condemning violence and notifying students that the announcement that classes are to be cancelled on July 23 was false, distributed July 22 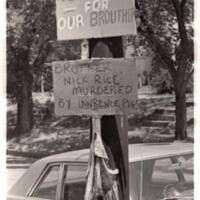 Signs on a utility pole in front of the Gaslight Tavern near where Nick Rice was killed, July 22 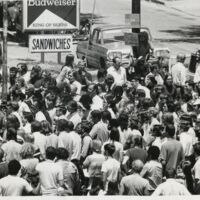 Crowd gathered in front of the Gaslight Tavern listening to speakers, July 22 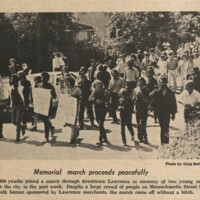 Procession through downtown Lawrence to commemorate the deaths of Rick Dowdell and Nick Rice, July 23 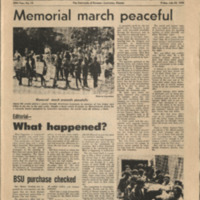 The July 24 issue of the University Daily Kansan 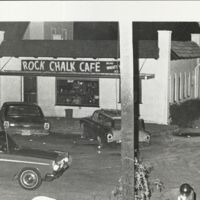 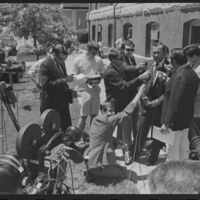 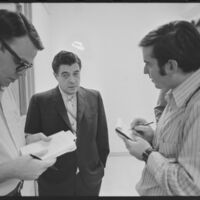 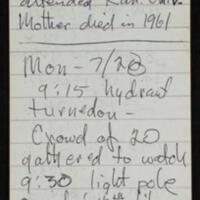